A lot of different information is circulating on the internet, so we decided to ask the MMDA through their official Facebook Messenger account. The answers we got are pretty straightforward.

First, here’s a list of vehicles that are exempted from the MMDA modified number coding scheme: If your vehicle does not fall under these types, then no, you are not exempted from coding.

Next, a lot of us have been under the impression that some professionals like physicians (this also applies to all other medical and healthcare workers after asking again in a later message), senior citizens, and persons with disabilities (PWDs) are exempted from the MMDA modified number coding. We confirmed this and we again got an immediate answer. No. Unfortunately, they will still have to wait for 8:00 PM for coding to be lifted before they can travel.

It is worth mentioning that Makati enforces its own coding rules, and exemption is only given to senior citizens with a Makati Blu-Card. Otherwise, the same non-exemption applies. 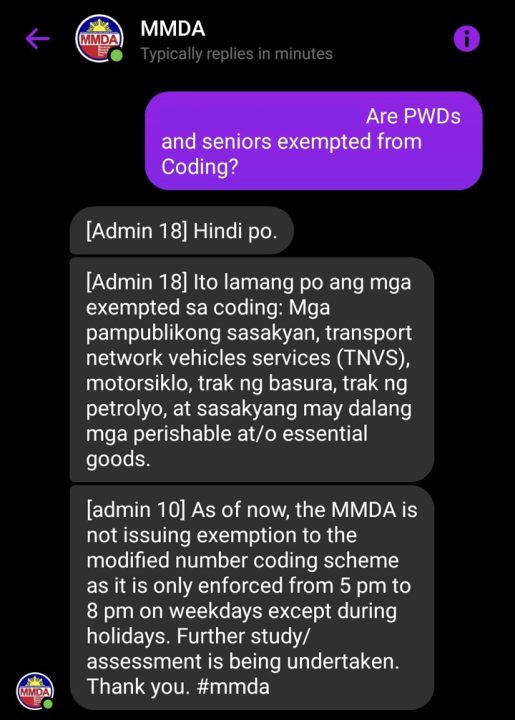 Last month, a congressman had asked both the MMDA and the Makati City local government unit to exempt medical workers at least. The MMDA site posted exemption rules for physicians last 2017, and guidelines for general exemption from the MMDA number coding were also posted in 2019, but these are already defunct and not applicable given the information we gathered today.

To date, no official response has been made by either and based on the reply sent to us, the current 5:00 PM – 7:00 PM implementation may be one of the factors as to why such a request cannot be granted. The MMDA did say that “further study/assessment is being undertaken”. We can only hope that that includes working out valid exemptions for qualified individuals.

So there you have it straight from the source. It never hurts to directly ask about the MMDA modified number coding scheme from the Authority itself. It’s actually the safest and most reliable way to get answers. If not, then always remember to recheck your sources. You wouldn’t want to get caught and argue with wrong information.