An average of 80% of vehicles we see on the road these days — at least in the Philippines, runs on a more traditional gasoline engine. Only a number of those vehicles run on a hybrid powertrain which is mostly PUVs. Car companies like Toyota are slowly bringing their Hybrid vehicles here in the country, intending to lessen the CO2 emissions from conventional cars. Luckily for us, our friends at Toyota sent us one of their new hybrids — the 2020 Toyota Corolla Altis. 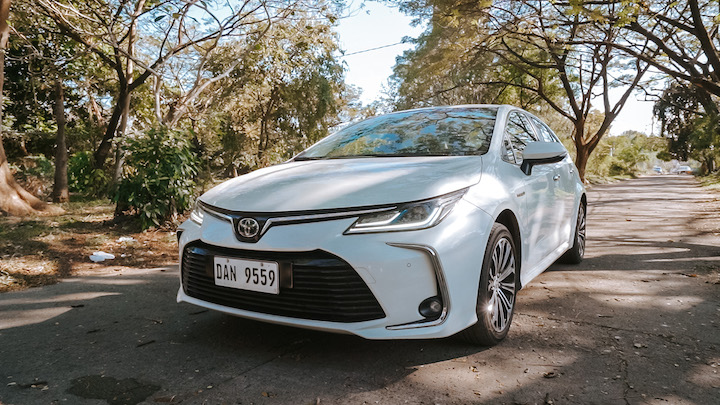 With an average rate of about 1 million units sold each year worldwide, we could say that a single Corolla is sold in about every 15-20 seconds. By this time, you probably already figured out that the Corolla tag comes in various forms depending on where you live. In our country, the Altis variant has been available since 2001 and has stayed since. And thank god it did! This guy has gone a long way from what it was like in the beginning. So let’s go ahead and break it down. 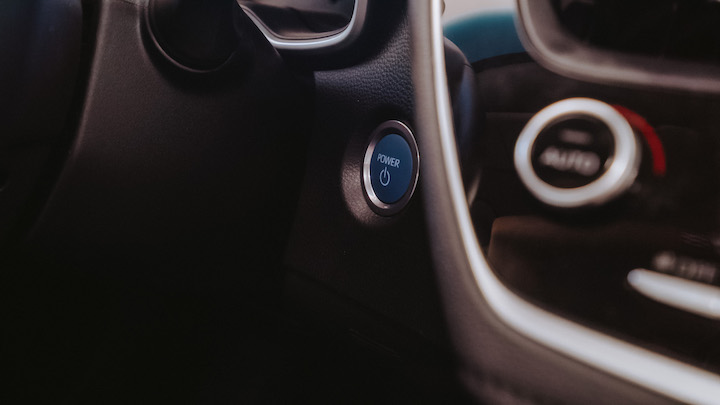 The Corolla Altis is available in 6 different trim levels. From your 1.6 Manual and Automatic variants all the way up to your CVTs. But what we’re going to be focusing on is their top-of-the-line variant, which is the one that comes with Toyota’s Hybrid Technology. It comes with a 1.8-Liter VVT-I 4-Cylinder In-Line DOHC, 16 Valve with Electric Motor which can deliver up to 121hp @ 5,200 rpm and 142Nm of torque @ 3,600rpm. It also uses an Atkinson-style engine, much like the ones in the Prius. 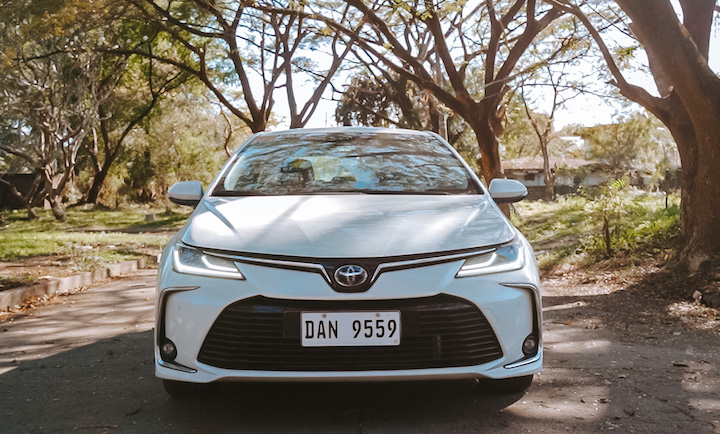 It’s almost hard to imagine the humble beginnings of this vehicle’s design regarding its overall style. From its family-friendly take your kids to school type vehicle, the new Toyota Corolla Altis has been slowly getting more aggressive and sleek, and we like that a lot! 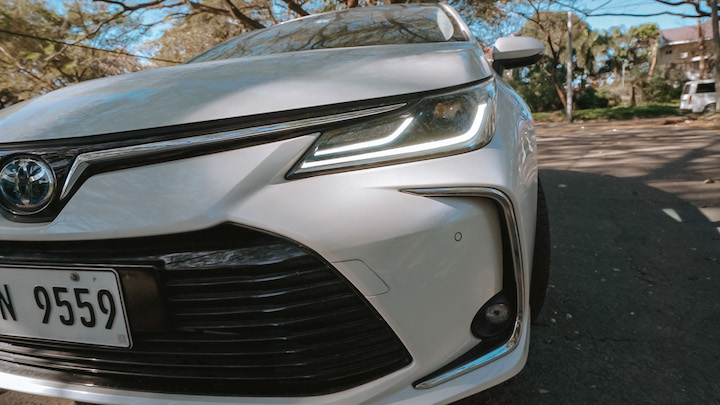 The front clip is arguably the most eye-catching part of them all, boasting a fairly intimidating yet elegant look–particularly the combination of these sharp-looking LED headlights along with the wide radiator grille. That translates nicely over at the rear end and thinner LED tail lamps, while its side still retains that simple and elegant look, reminding us that this is indeed a Corolla and a good-looking one at that. For wheels, this vehicle is equipped with 225/45 Aluminium Alloy wheels with a wheelbase of 2700mm. Also, you can find here your side mirrors with repeaters.

Despite being marketed as a compact daily driver, the Toyota Corolla Altis perfectly combines the aesthetics of a casual ride with a more premium finish. With that said, this vehicle is pretty versatile. So whether let’s say you’re a professional, businessman, or even a fresh graduate, you’re going to fit right in. A combination of stitched leatherette seats and well-constructed plastic materials make for a solid and refined interior. The all-black look is minimalist, with just the driver’s side having most of the bells and whistles. It’s a very familiar and ergonomic design but at the same time is still stylish in its own little way. Certainly more than its predecessors at least.

Everything in the middle should be similar to what you would find in other trim levels.  The infotainment system isn’t the latest and greatest. But it’s got neat features such as T-Link and covers all the essentials you would expect, including a reverse camera. 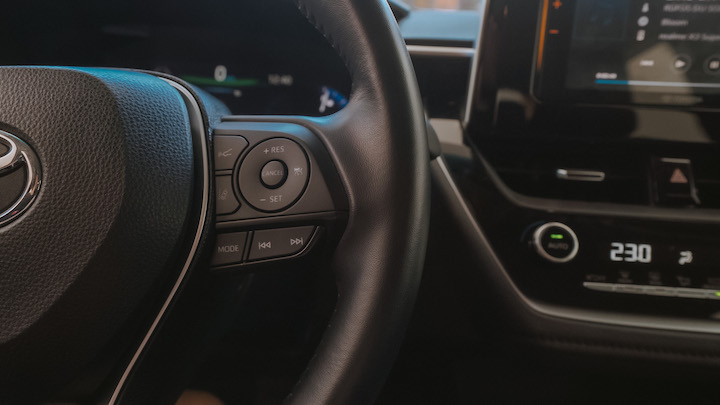 The leather-wrapped steering wheel is mounted with controls for the audio, handset, and voice control, as well as lane-keep assist with cruise control functions, which worked expectedly well when we tested it on the road. It’s also quite comfortable not just at the front, more especially at the back. Stitched Leatherette seats, Dual vent air conditioners by the center console, a manually retractable rear window shade, and to top it off, we have a pretty spacious headroom as well. Obviously, that’s no problem for someone like me who stands 5 feet and 7 inches tall, but even people at 6-feet tall won’t have a problem with that.

You can also access the trunk through the rear seats with a push of a button, and what’s convenient is that both seats can be pushed down so you can easily reach in and store things. It is spacious inside, so you can store things like your luggage and bags, go on a picnic, or maybe even a road trip out with friends. 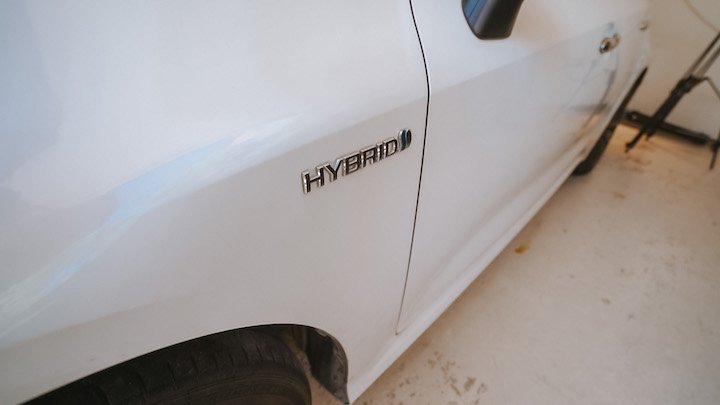 A hybrid-drivetrain allows you to have the best of both worlds of an electric and petrol car. In the city, where driving is much slower, the electric motor puts in most of the work, increasing fuel efficiency while reducing CO2 emissions. But once you hit the open road, the engine kicks in, and you should be speeding away. With a Hybrid, you’ll have the power and torque advantages of a fully electric vehicle without having to worry about charging your car because regenerative braking rather does that all for you. When you lift your foot off the accelerator, the motor swaps directions and starts to transfer that energy back into the battery. It also works when you’re going downhill, and obviously, when you’re breaking as well. 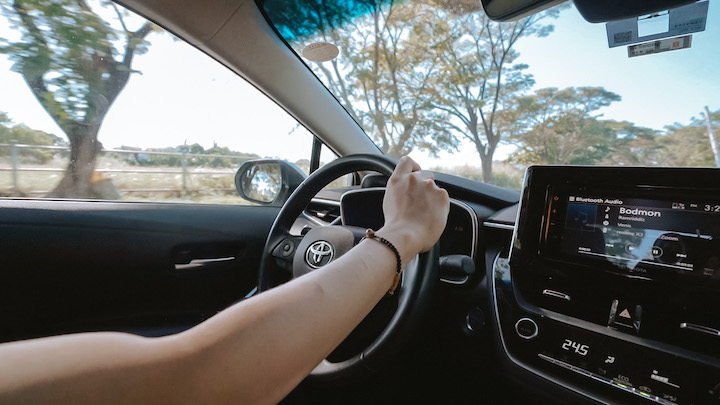 Driving a Hybrid vehicle is not all too different from its gas-powered counterparts, except for a few things. When it comes to your instrument cluster, normally, you would see your RPM gauges on the left. Instead, we have this Hybrid System Indicator that lets you know exactly what’s happening to both the engine and your battery as you’re pressing on the pedal.

Turning on the engine will leave you impressed at how quiet it is. Normally, you’d expect that satisfying cranking and rumbling, letting you know that it’s good to go, right? Well, on the Corolla Altis Hybrid, It is so quiet that sometimes you can’t tell when it’s on. You can thank the electric motor for that.

The moment you press hard on the accelerator, it starts to provide power to the motors, eventually starting the engine as you take off. But when you’re at low speeds, like when you’re in traffic, it automatically uses the electric motor so long as it’s charged. 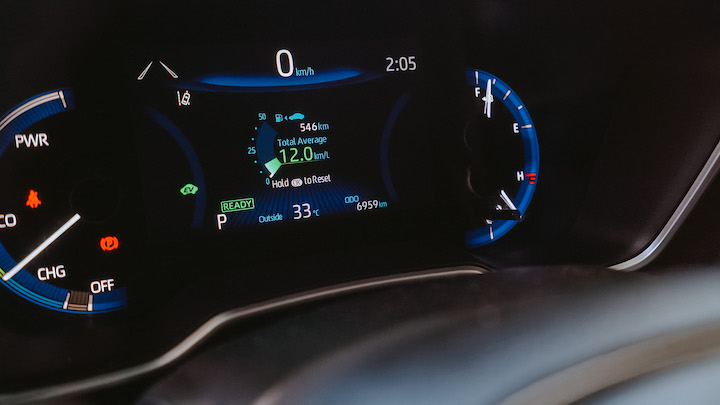 The Toyota Corolla Altis has three Driving Modes, which can be accessed right above the gear levers. Normal, Eco, and Power Mode. Having been driving it for a while, I found that ECO mode gave the most balanced performance. When you press on the pedal, the car knows when to limit throttle response from heavy acceleration and even limits A/C power when needed. This is the setting you’re going to want to be in on a day-to-day basis.

If you’re feeling a little electric, flip the EV mode switch on, which will power your car using only the electric motor. This was super convenient during stop-and-go situations. Unfortunately, we weren’t able to get a full battery charge to get a continuous drive. But thankfully, we were still able to experience a little bit of it. Using EV mode takes up a good amount of power, so when you’re low on juice, the car automatically engages the engine until you’re all charged up again. And just to let you know, it’s unlikely for Hybrids like this one to discharge fully, so no need to worry there. 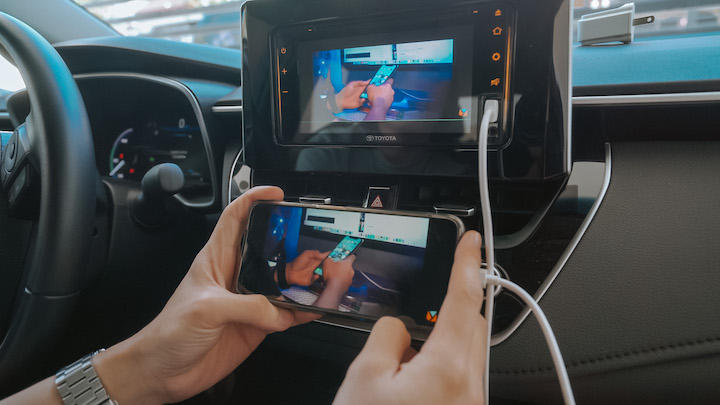 There’s a mini display that’s lodged in the middle of your instrument cluster shows you a multitude of useful information, but what we personally prefer to see all the time are the battery and power delivery indicators, which is basically just a digital display of what’s going on the left analog gauge, except in a more accurate way. Over here, you can see the battery level and where power is being delivered, which really helps a lot of new Hybrid car owners understand what’s going visually. Needless to say, the Toyota Corolla Altis Hybrid is a beast when it comes to fuel economy.

We averaged at 20.6 km/L over the course of 3 days in the city, which easily outranks a lot of other subcompact cars and sedans on the road while being more aggressive on the gas gave us around an average of 15 km/L.  These are already respectable numbers. Driving on the highway can even get you an even better 23-25km/L. 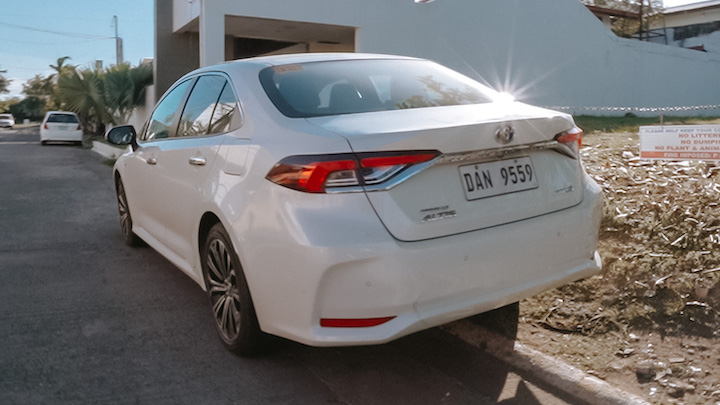 So does this car live up to its name? Yes! The Toyota Corolla Hybrid is definitely a great consideration if you’re looking for an economical daily driver. Sure, it might be more expensive than its fully gas-powered counterparts, but in the long-run, you could save a lot of gas money as compared to conventional vehicles. Apart from that, the pros seem to outweigh the cons.

It’s quiet and nimble, has less of those nasty tailpipe emissions, and the fact that you’ll be paying visits to the gas station much less is going to be a great feeling for anyone. The hybrid variant is the only one in the entire Corolla Altis lineup with Toyota Safety Sense features such as automatic high beams, dynamic radar cruise control, and lane-keep assist. So if you’re one for extra safety, this is something to highly consider.

So what did you guys think of Toyota’s latest Hybrid? Let us know in the comments section down below!

With additional input and editing by Arel Ebana.