Home - News - Ford launches 2023 Ranger Platinum in Australia, could we get it here?
NewsAutomotiveCars & Transportation

Ford launches 2023 Ranger Platinum in Australia, could we get it here?

We’ve already written extensively about how much more premium and upgraded the 2023 Ford Ranger is. It made its refinement and power apparent despite the fact we were traversing over lahar and rivers.

In our local market, the top-end Ranger variant is the Wildtrak 4×4 which is more than enough in terms of standard premium equipment and feel. Yet, Ford believes it could be better still, and in Australia, they’ve shown us what better is. Lookswise the Ranger Platinum of course switches out the Titanium badges with Platinum ones, it also gets upgraded 20-inch rims. The LED matrix headlights and LED taillights remain the same. It also gets a damped (gas strut) tailgate along with Ford’s new Flexible Rack System and a power roller shutter. Joining the color palette is Equinox Bronze a color previously available only on the Everest as well as an optional black-painted roof.

Inside most of the interior elements were upscaled, but it does retain the same upper and lower glovebox setup found in the local Wildtrak. Some of the changes though include quilted leather seats and a heated steering wheel. The front seats are 10-way adjustable heated and ventilated units with memory functions for the driver. 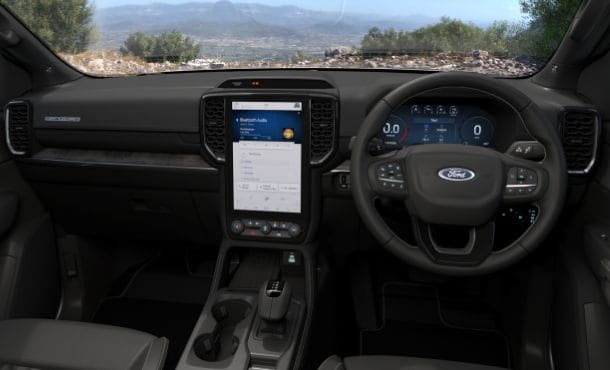 Just to add a little more oomph to the sound system the automaker decided to put in a Bang and Olufsen unit.

It’s not all about looks though because under the hood of the 2023 Ranger Platinum is a 3.0-liter V6 turbodiesel producing 250 HP and 600 Nm of torque. Power is delivered through the Ranger’s electronically controlled full-time four-wheel drive system, coupled with Ford’s 10-speed automatic transmission.

In Australia, the Ranger Platinum will retail for around PHP 2.919 Million and is expected to hit showroom floors come May 2023. How long before PH gets it?

Ford launches 2023 Ranger Platinum in Australia, could we get it here?