The lack of viable, accessible public transport has been a problem in the Philippines for a very long time now. Let’s focus on one in this article: provincial buses. While (taking) this mode of transportation has indeed improved, there just aren’t enough buses to address a continuous exodus to and from provinces. Apparently, the situation’s been made more difficult because of the new MMDA Provincial Bus Window Hours.

As of today, a number of terminals spread around the EDSA-Cubao area were made to adjust their bus travel times. Trips will now be made between 10:00 PM and 5:00 AM the next day. That means province-bound buses can only leave, and Metro Manila-bound buses can enter, well, Metro Manila, only between the said hours.

Travelers expecting to get a ride home earlier today weren’t sold tickets and were told about the new guideline, much to their frustration and anger. Understandably so, no doubt. It’s caused a stir since bus companies have posted the new schedules and private individuals started taking to social media to air their frustrations. Such rules are implemented by the MMDA, but in a twist, they passed the buck to the Land Transportation Franchising and Regulatory Board (LTFRB).

First, let’s put some things into perspective. Those heading to the provinces have ready terminals in the Metro and the provinces they’re going to. Of course, there are also bus companies, particularly from the northern provinces, but most of them don’t have their own terminals here. What these buses will do is they have to go to and use integrated exchange terminals (ITX). The problem with this is only about 30% of these buses have QR Codes and/or special permits that allow them to not use these ITXs and just travel freely. If the remaining 70% of provincial buses cannot travel freely, then commuters now have even fewer options for transportation to and from.

Now let’s go back to the situation in Metro Manila. According to Alex Yague, executive director of Nagkakaisang Samahan ng Nangangasiwa ng Panlalawigang Bus sa Pilipinas Inc., provincial buses were already allowed to in Metro Manila since March 10, 2022. This was just after the region shifted to Alert Level 1. Yague said that a resolution of the Inter-Agency Task Force (IATF) stated that the use of ITXs is no longer mandatory. He further added that this predicament could have been avoided if only the LTFRB updated the memorandum circular to reflect this change.

Going back to the MMDA’s part in all of this, they had a two-week dry run for the reentry of provincial buses. It got the approval of the Department of Transportation, and from then on, all should have been in order. Yes, there may have been no proper advice from the MMDA, but this is why they revert back to the LTFRB regarding the commuters’ grievances on the change of travel times of provincial buses. Perhaps as the MMDA perceives it, despite the newly-implemented window hours, other transit companies should already have no problems ferrying people to and from, given an updated memorandum circular.

The LTFRB was quick to issue a statement regarding the issue. According to a post on the official LTFRB Facebook page, the implementation of the Window Hours follows an agreement between provincial bus operators and the MMDA; an agreement of which the LTFRB was never a part of. The LTFRB also said that given the new guidelines, all traveling provincial buses that will enter Metro Manila outside the prescribed times cannot use their private terminals and must instead go to and use ITXs as seen in the infographics below. They also reiterated that they give permits to operate to provincial bus operators so they can transport passengers at any time needed, contrary to the new window hours being imposed. 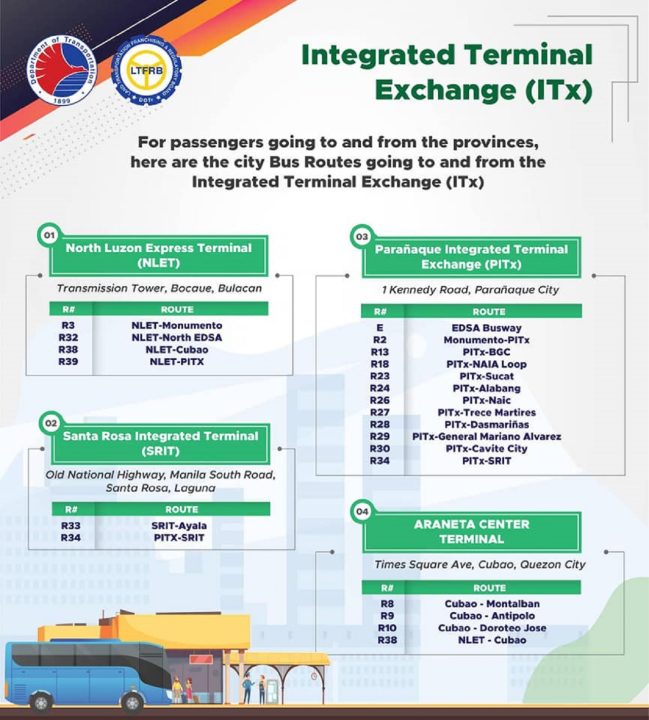 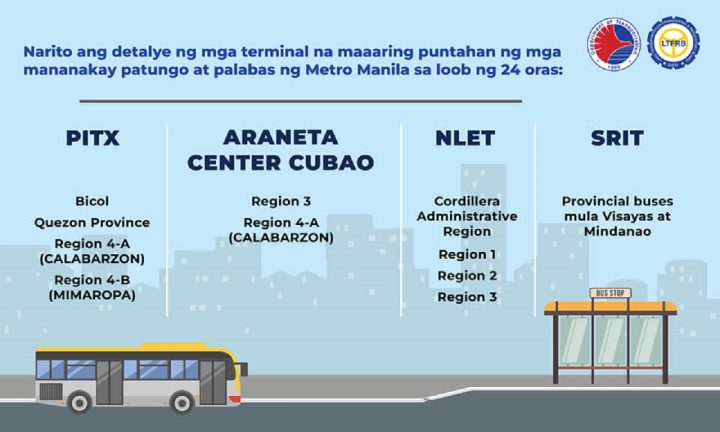 On the same token, the agency also reminded bus operators that following the new mandate is still a must since they agreed to it along with the MMDA. That is part of their responsibility as common carriers, and violations of the MMDA’s mandate are subject to penalties. No statement in relation to the non-update of the memorandum circular was given by the LTFRB.

So where are we now? We have commuters stuck in terminals. We have a government agency that is being accused of not giving proper advice regarding a new window scheme. We have another agency that seems to have offered a solution, but may still not be viable because of an outdated memo. It’s a mess.

However we look at this, the imposition of the new provincial bus window hours has become a Pandora’s Box that exposed even more of the lapses that burden our far-reaching commuters. We won’t call out specific individuals or government agencies, but this is a huge wake-up call. The Filipino people are suffering in more ways than one. Mis- or non-communication must not be an option, and properly planned actions are called for and fast. Everyone has been waiting and hoping for better mass and public transportation. Get your act together for the people, please?