Apart from the reported “New Number Coding Scheme”, the MMDA still has other proposals to reduce traffic volume in the Metro.

One of the main topics discussed in MMDA Chairman Romando Artes’ presentation to the President was a proposal to the LTO. What the MMDA is proposing is that if you already own a vehicle and plan to buy a new one, the LTO will register it with the same number plate ending. 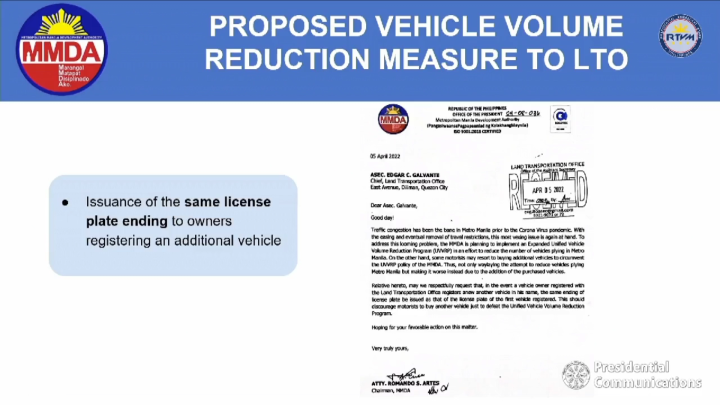 In effect, they are trying to curb the sentiment that the solution to number coding is to buy more new vehicles. According to MMDA Chairman Artes, this proposal was suggested as a result of people claiming that any new number coding scheme is “Anti-Poor”.

What is interesting about this is there is no mention of people buying vehicles from the second-hand market. Given that these cars are already registered and have number plates already.

Traffic in Metro Manila has only gotten worse in recent years. The Coding scheme was meant to be a way to lessen vehicles plying the roads, but many have said and still believe that it never worked. Will the MMDA’s added proposal make things better or worse? How will it affect the economy as far as brand new vehicle sales go? And how will it (re)define the second-hand car market as we know it?

While nothing has been set in stone yet, this brought about more questions than answers. All of us will just have to wait and see.