It’s only been about 5 months since the all-new 2022 HR-V was released in the Philippine market. As with its predecessor, 2 variants made their way to our shores, and we’re here to find out just what the entry-level HR-V S can offer in a very competitive crossover segment. With so many customers out to find something that rides higher than a sedan, has good and versatile cargo space, and has good value for money, does this variant have what it takes to make the top of everyone’s list? 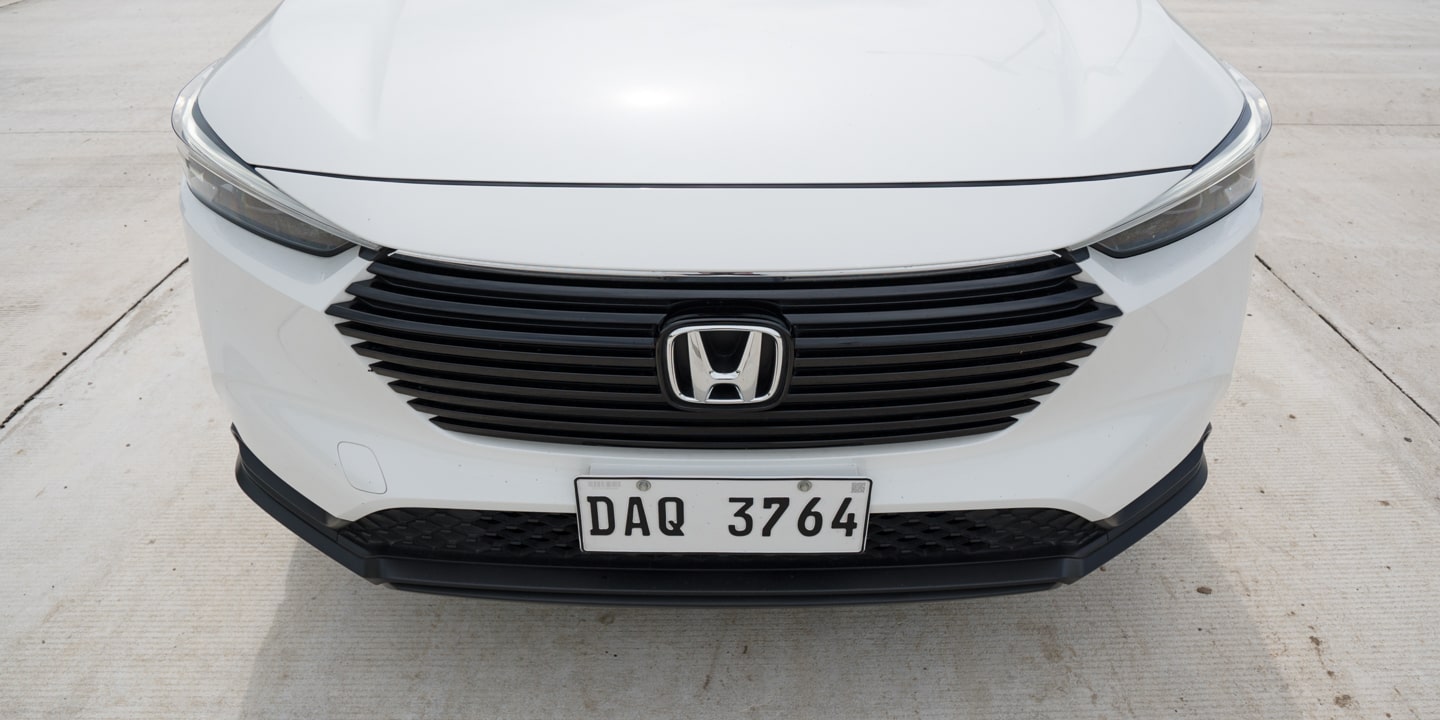 There is no denying that this is not a simple facelift or minor model change. While Honda has had a penchant for releasing these “MMCs” for most, if not all, of their vehicles, the HR-V finally got an all-new release. Just looking at its exterior, you know it’s a far cry from the previous generation.

Starting at the front, you get a sizeable horizontally-slatted grill finished in black. Leaked pictures that made their way to the internet prior to its release made us think “oh, this might not work” but we were proven wrong. It looks good! With most crossover going the sportier route, this grill design gives more class and more elegance to the overall look. Flanking it are slim LED headlights with DRL strips.

What’s otherwise a very minimalist front end is accented by a honeycomb-patterned lower grill and the LED foglight housings on either side. The clamshell hood also gets carried into the HR-V S’s design, and that’s a good thing. Minimalist that works great right here. 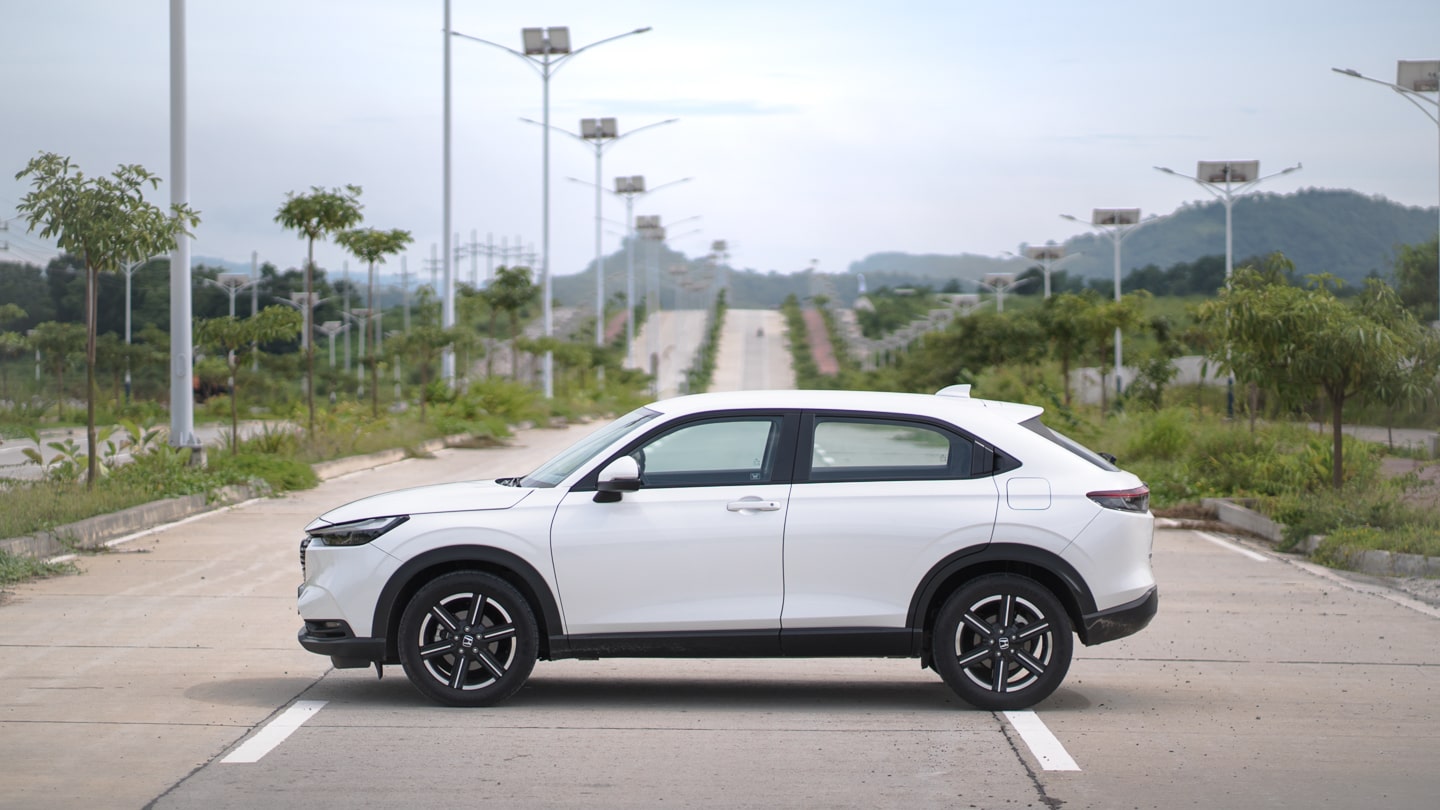 Over to the side, you won’t see much going on. The silhouette and overall shape from this angle show that it’s pretty similar to the previous model. A lot of the black accent pieces running along the front, side, and rear are also carried over into the 2022 model. These pieces give a much-needed contrast to the HR-V, and they do a good job of making this crossover look a little bit bigger, longer, and wider. You’ll also see the accent lines above the fenders, and that’s what gives it a sportier feel.

The roofline and more so the tailgate took on a more raked shape. If anything, this reminds me of a certain crossover from Germany (ahem! Macan! ahem!). I’ve always said that the HR-V’s rear end looks a bit “chopped off” and a bit too high off the ground, but it’s a nice change to the design that gives it a distinct look compared to others in its segment. And oh, the “black chrome” look on the taillights also adds so much more of an upmarket vibe to the HR-V S. 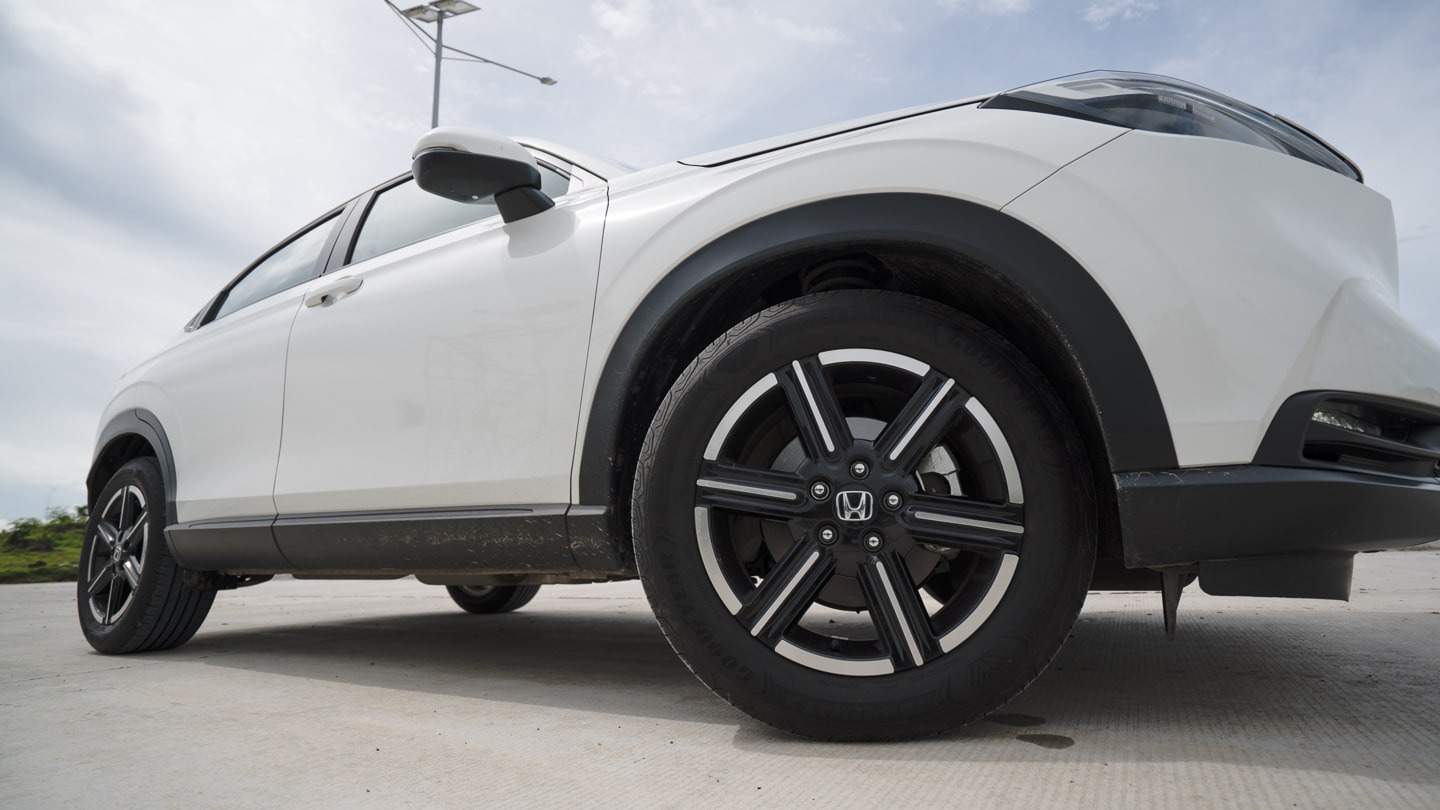 Compared to its range-topping V variant, the HR-V S gets a set of two-tone 17″ alloy wheels. A lot of people would prefer the monotone, gunmetal route that the V got, but personally I like two-tone wheels more. The chrome accent on the wheels give life to an otherwise “flat” side profile, and it does so while adding more class, too. If bling is not your thing, let’s agree to disagree because I think this set is better.

One more detail about this model is that in typical HR-V fashion, the hidden rear door handles/openers have been retained. A lot were confused as to where to grab onto and how to open the rear doors from the outside, and this funky little feature is still here in the all-new release. 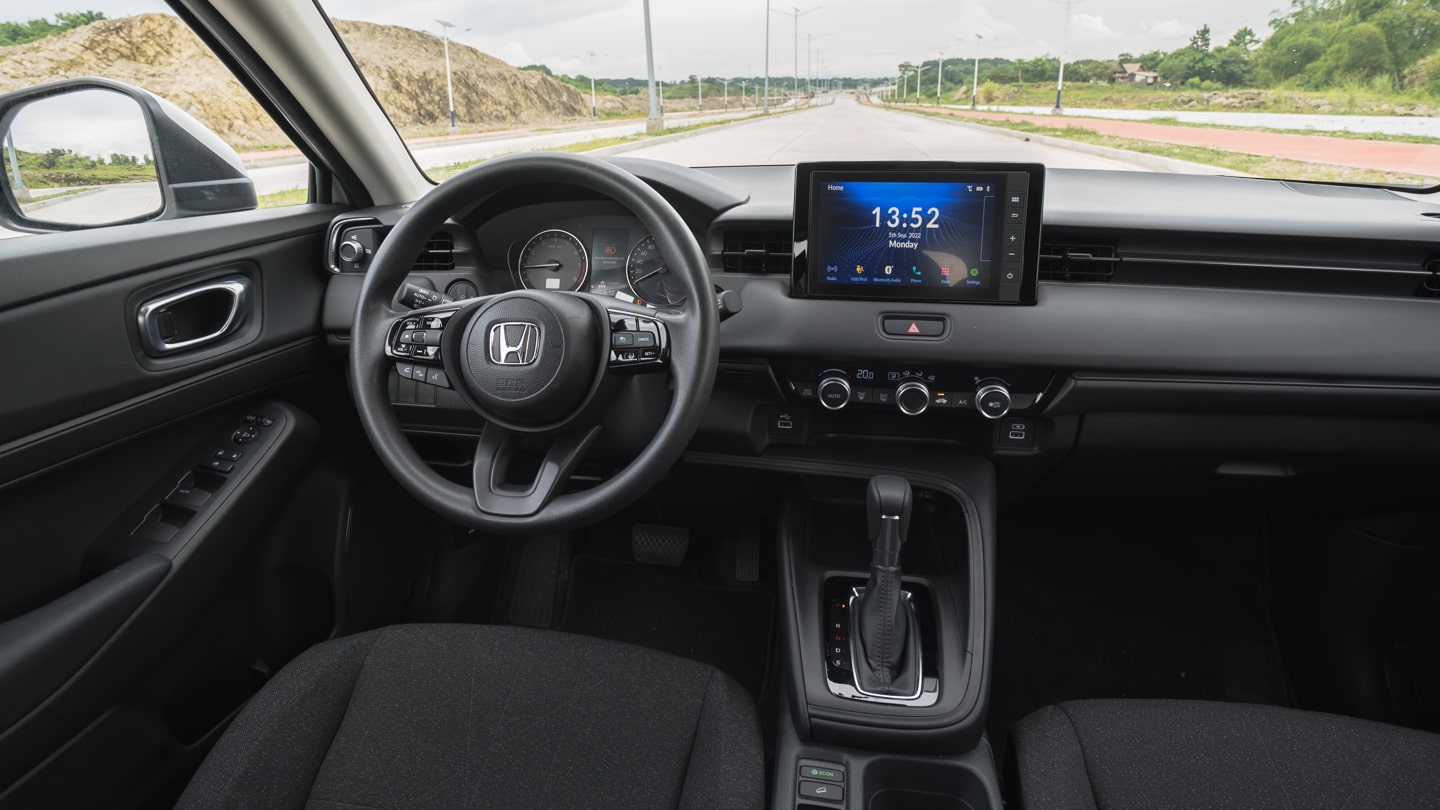 Once you hop inside the HR-V S, that’s where you’ll see that this is the entry-level variant. Right in front of the driver is an analog gauge cluster that comes with a 4.2-inch multi-information display (MID) in between the dials. Compared to the V which has a 7-inch display that houses both the tachometer and MID, you get the thrill of seeing moving needles in the HR-V S’ cluster.

Moving to the center stack, you have an 8″ infotainment display, new climate control dials that used to be haptics/touch-based in the previous model, 2 separate pockets, and a familiar-looking shifter lever. Something to nitpick about is the rather grainy quality of the rear camera’s resolution on the display; not the screen’s fault, but it can be attributed to the camera that Honda uses. Perhaps that can be upgraded, yes? Something to rave about, the rotary dials of the climate control. This is more natural, more intuitive, and having a more tactile feel is just more… satisfying when fiddling about with your air conditioning controls.

Another clear indicator that this is the base model HR-V S is the fact that you don’t see much leather, nor do you have a lot of soft-touch points in the cabin. Plastic is the material of choice and while leather is reserved for the higher models, the overall choice of material and color do not make the HR-V S look “cheap” at all. Fit and finish are both impressive with no unsightly gaps between panels. Plus despite thinner fabric compared to padded leather, the seats are very comfortable nonetheless. 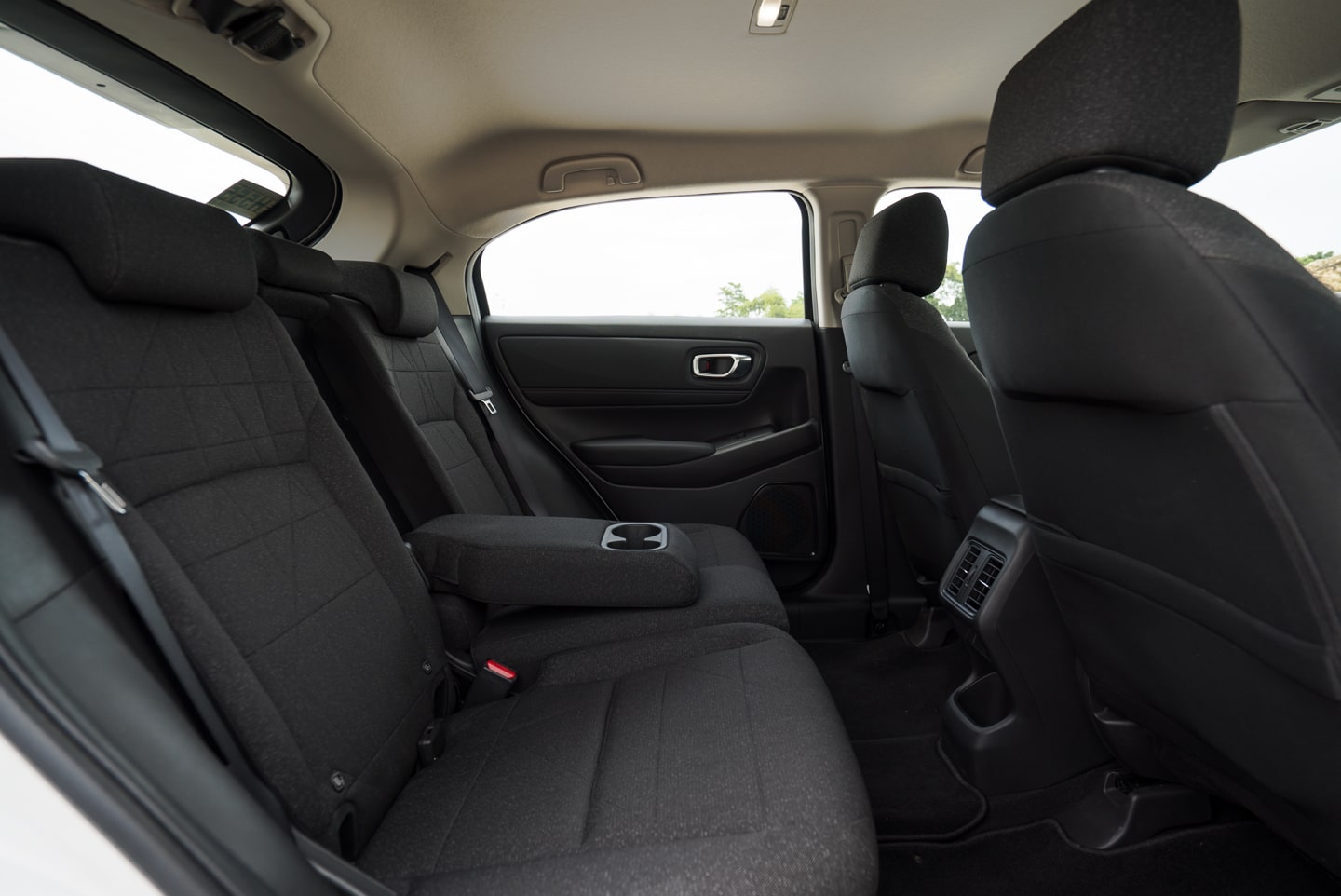 Now, a lot of people wonder about the size of the HR-V. Let’s start with passenger space.

Despite its unassuming appearance, the HR-V S has a lot of space inside, good enough for 5 people. But we’ll say this with a caveat. While the front seats are good for even the heftiest of people, and while the rear seats are good for 3 individuals, we suggest that the middle seat be reserved for the “smaller” adult. It’s not as cramped as a 3rd row in an SUV, no, but despite it being a 5-seat crossover, of course, you’ll have to be more realistic with your occupants in the 2nd row.

Legroom and headroom are more than ample, and it’s just the shoulder room that you need to look out for. Nonetheless, you can use this for a total of 5 people as intended with no problem. Seating 5 adults is no problem, true, but the best and most comfortable fit will be 4 adults and 1 child, perhaps. 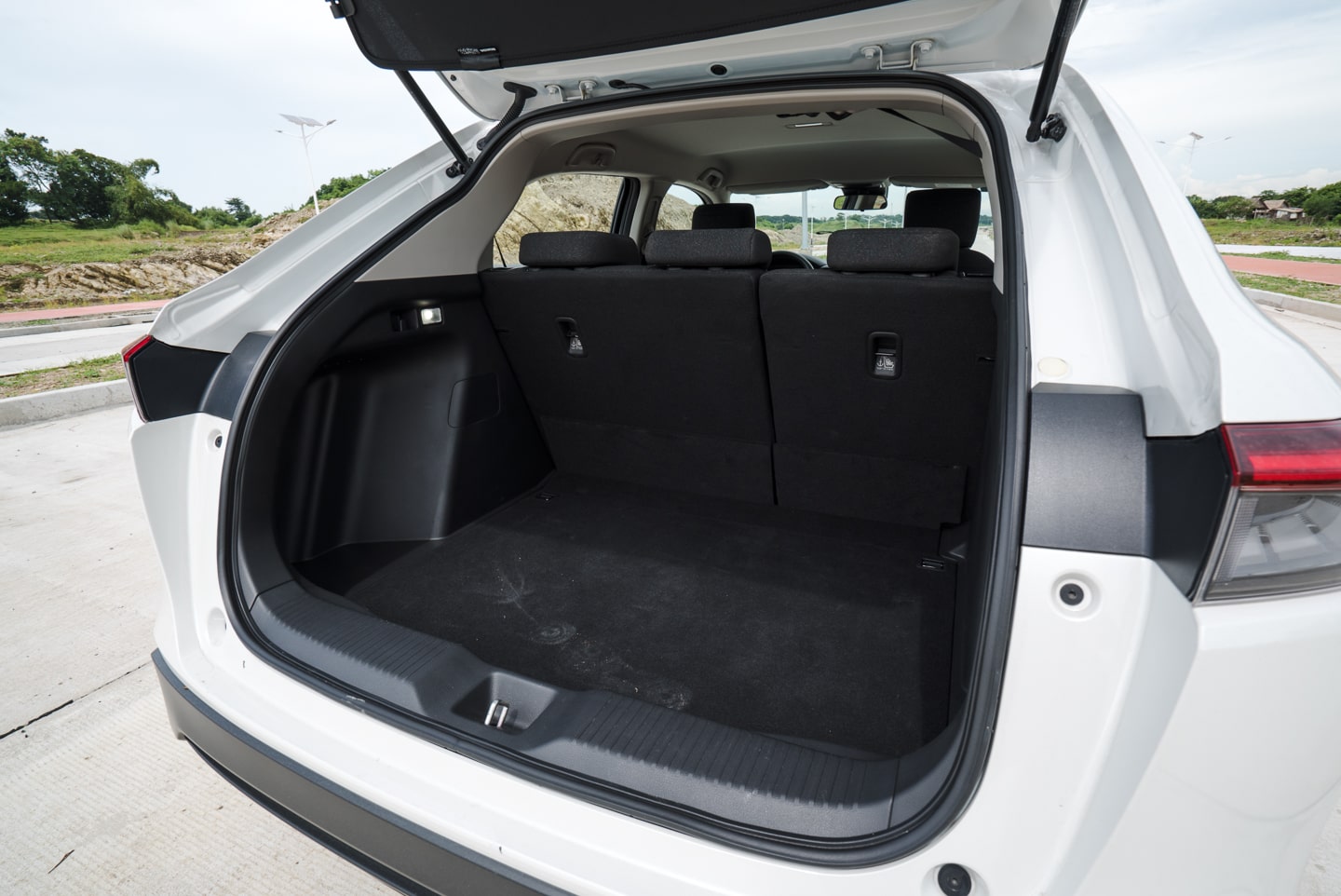 Cargo space is where the HR-V really shines, though. Based on the Honda City, the HR-V S is also equipped with its versatile cargo and seat functions called “ULT”. Yes, the “R” does not apply to the HR-V S as it does in the City, but “ULT” is all you’ll need in this crossover.

The trunk has more than enough space for normal cargo like travel bags and groceries. Should you have a need to carry bulky objects like appliance boxes, you can fold the rear seatbacks forward and down; that makes up the “Utility” mode. If you need to stow longer objects like construction materials or pipes, you can do so by using the “Long” configuration by folding the rear right seatback forward and reclining the front passenger side. And if you have “Tall” cargo, say a potted plant or a TV box that you need to keep standing, you can just pull the rear seat up and you’ll have more vertical space to use.

These functions really up the HR-V’s game in terms of versatility for space and cargo. It’s also a good thing that despite being the base model, Honda made sure the HR-V S gets these, too. Yet another question that many people ask about the HR-V S is its power. It’s not a turbo-powered engine like the one in the V variant, and it’s no longer powered by a 1.8-liter gas engine. The S has a 1.5-liter naturally aspirated power plant under its hood that makes about 121 PS and 145 Nm of torque. To answer the great question, I’ll answer thusly: as a city car for the family, you will not be left wanting in the HR-V S. The power and torque are just enough, and even with 5 people or more cargo onboard, it has just enough pull to get you going comfortably and economically.

If you choose to use the HR-V S for more highway travel, it’s good for that, too! But you can expect fuel economy to be a bit lower especially if you’re packing a full house. On the highway, we were doing close to 15 Km/L with 2 people and some cargo in the back, and no we weren’t consciously hypermiling.

Don’t expect a fast crossover, either. Above all, I think Honda designed the HR-V to be more functional (and handsome) than fast or quick. Again, it does this (these: functional and handsome) very well, despite how many people see its engine to be a stumbling block.

The ride quality is also really, really good. Honda seems to have been able to strike a great balance between a firm and soft ride with the HR-V S. Regardless of being a lone occupant, or if you have people or cargo in tow, the ride quality may differ across situations, but not in a way that it suffers. The suspension adapts well to loads and you still get a comfortable ride whether in the city or out on long highway drives. This is a very big plus, especially for those who would want to pack a small family into their new crossover. 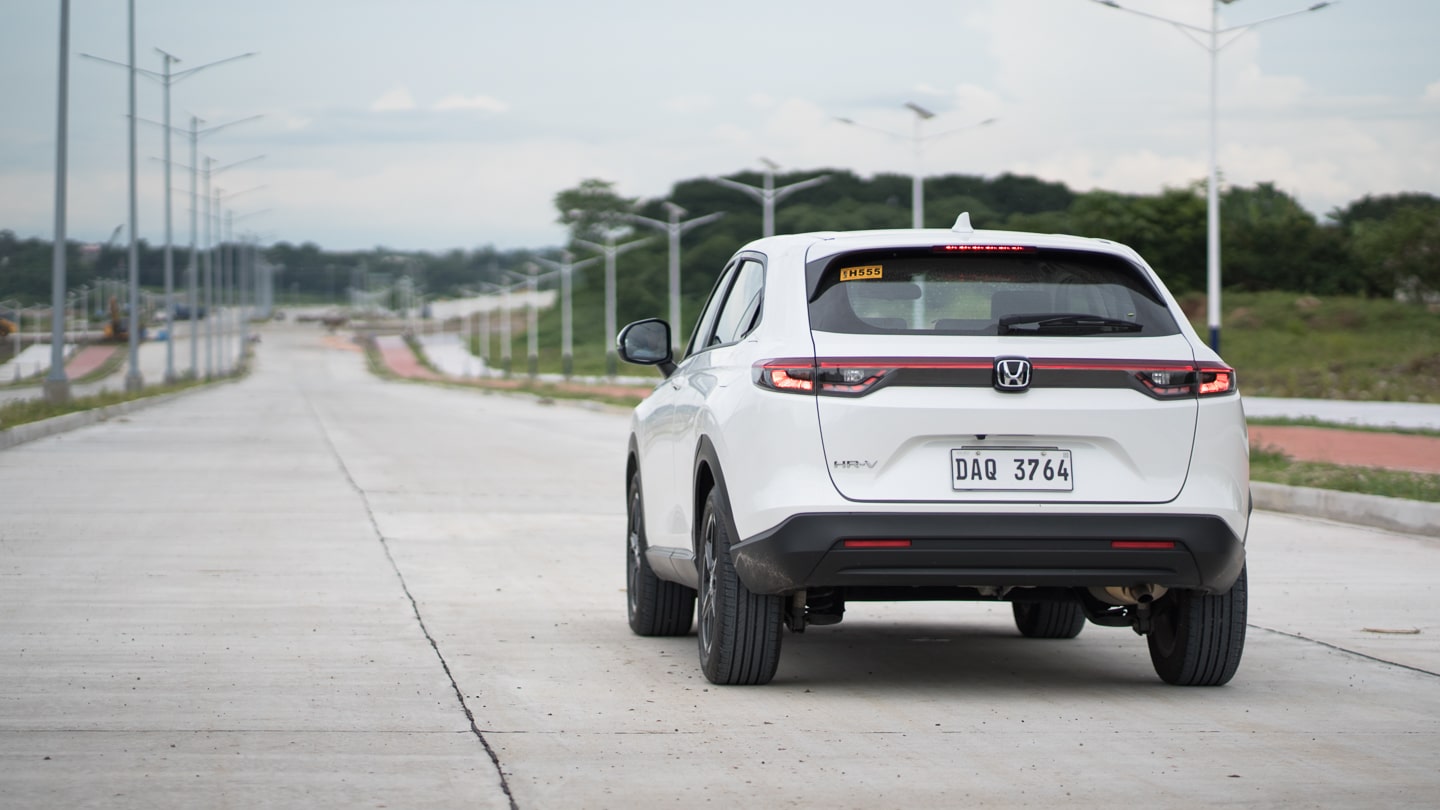 And now, the ultimate question: is the 2022 Honda HR-V S the crossover to beat? At its price point, does it come with all the things you want and need at the best value? My answer is yes.

With a PHP 1,250,000 price tag, you get a whole lot of crossover, space, height, versatility, and most importantly safety with the HR-V S. Sure, getting the top-of-the-line V Turbo is well and good, but that’s an extra PHP 348,000 you’ll have to put out for different upholstery, some added tech, but basically (most of, if not all) the functions of the base model.

I won’t lie and say that personally, I’ve always been a fan of the HR-V. With this all-new model, I’m simply giving credit where credit is due. Honda packaged the HR-V S very competitively, and it comes with the Honda Sensing safety suite as the icing on the cake. If I were to name one thing that makes it all worth the coin, it has to be Honda’s attention to safety. That in itself is already priceless.

And that is what makes the HR-V S an absolute bang-for-the-buck choice in the crossover segment.

No, Driver's Licenses will definitely not be confiscated by QC LGU traffic enforcers