The 2019 Ford EcoSport is a feature-packed, urban warrior. This sub-compact crossover is what I deem to be the perfect vehicle for our Philippine roads. –Woah there, that’s a strong statement. But hey, let me explain.

When you think about driving in the Philippines, the first thing that comes to mind is traffic. Driving from point A to point B in the metro is just a bother to think about, it literally makes me want just to stay in bed all day. The bumper to bumper traffic, the dehydrating heat, the deep potholes, the swerving buses, the list goes on! 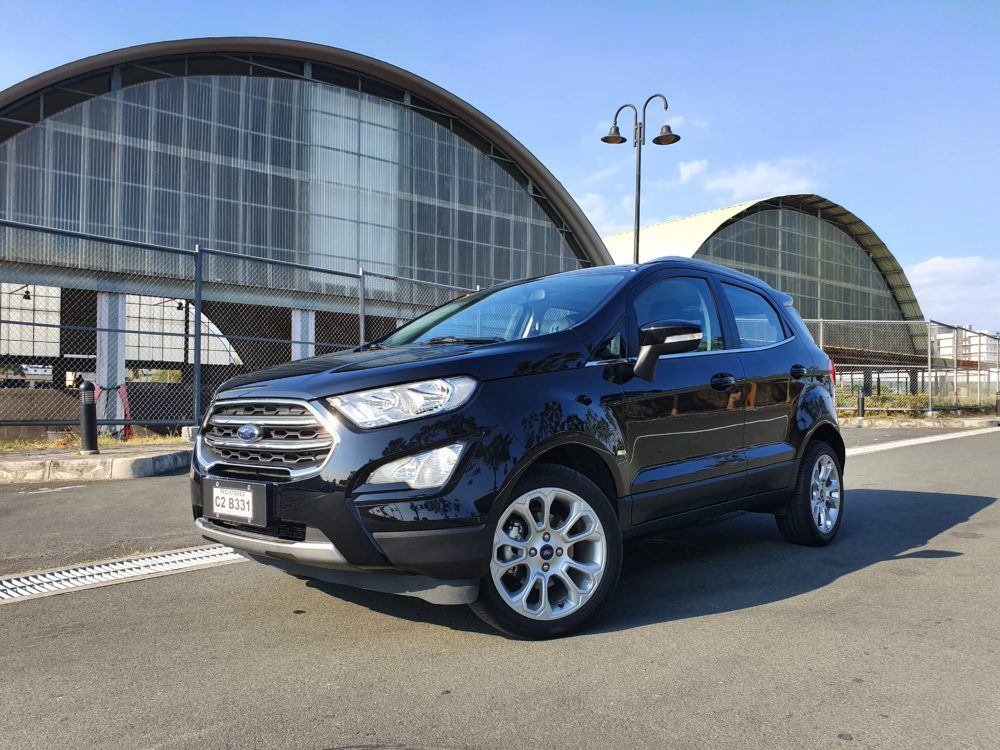 With the Ford EcoSport, most of those things don’t seem to bother me anymore. It doesn’t solve our ever-growing traffic problem, but it does make it way more bearable. Like most cars in 2019, this one gets support for Apple Carplay and Android Auto, which is excellent! Utilizing Waze and Spotify to beat that traffic is just a breeze. For flooded roads, and potholes, it doesn’t matter. The EcoSport gets a ground clearance of 209 mm and the suspension can easily take-on those dreaded holes on the road! –I literally drive over potholes like they aren’t even there in this thing. (I totally don’t condone you doing that all the time by the way. Save those shocks!) 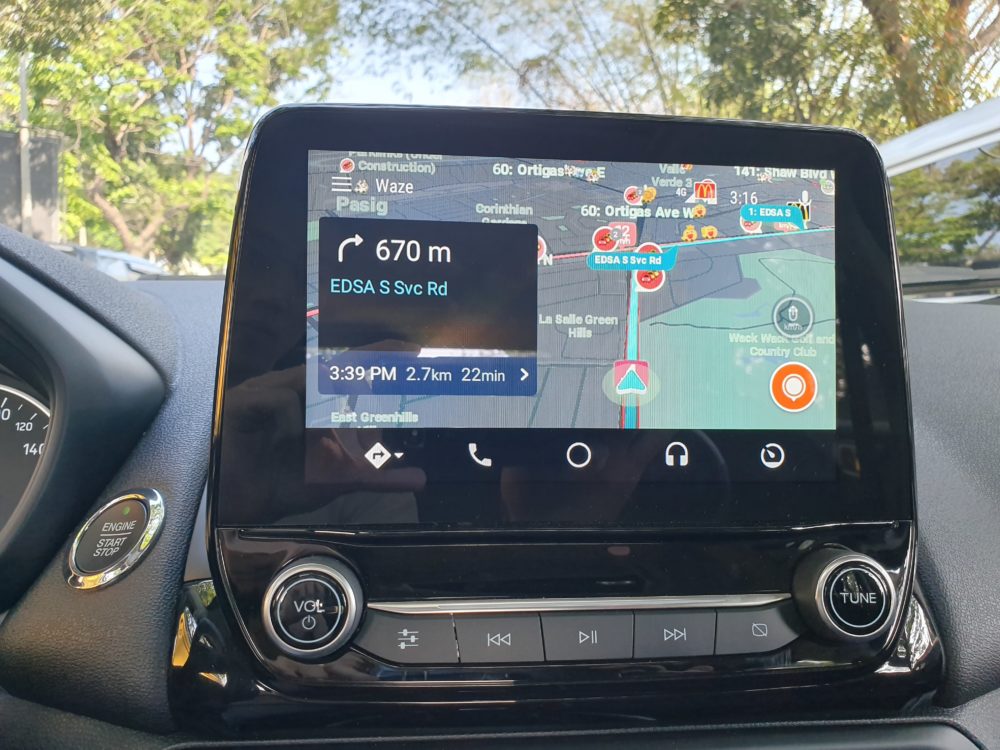 If you get any of the other variants ranging from the base Ambiente MT to the regular Titanium model. You will be receiving a 1.5L naturally-aspirated engine that outputs 123 horses at 6,500 rpm, and 150 Nm of torque at 4,500 rpm.

For variants, the 2019 EcoSport has five, the five-speed manual transmission Ambiente, and Trend. The six-speed automatic transmission Trend, and Titanium. And lastly, the above-mentioned EcoBoost Titanium. They all come equipped with 17-inch Alloy wheels, except for the base Ambiente, which comes in 16-inch Steel ones. The 2019 Ford EcoSport is available in the following colors:

When it comes to the exterior of the vehicle. Not much has changed since the previous model, the 2019 EcoSport gets more of a facelift over anything else. 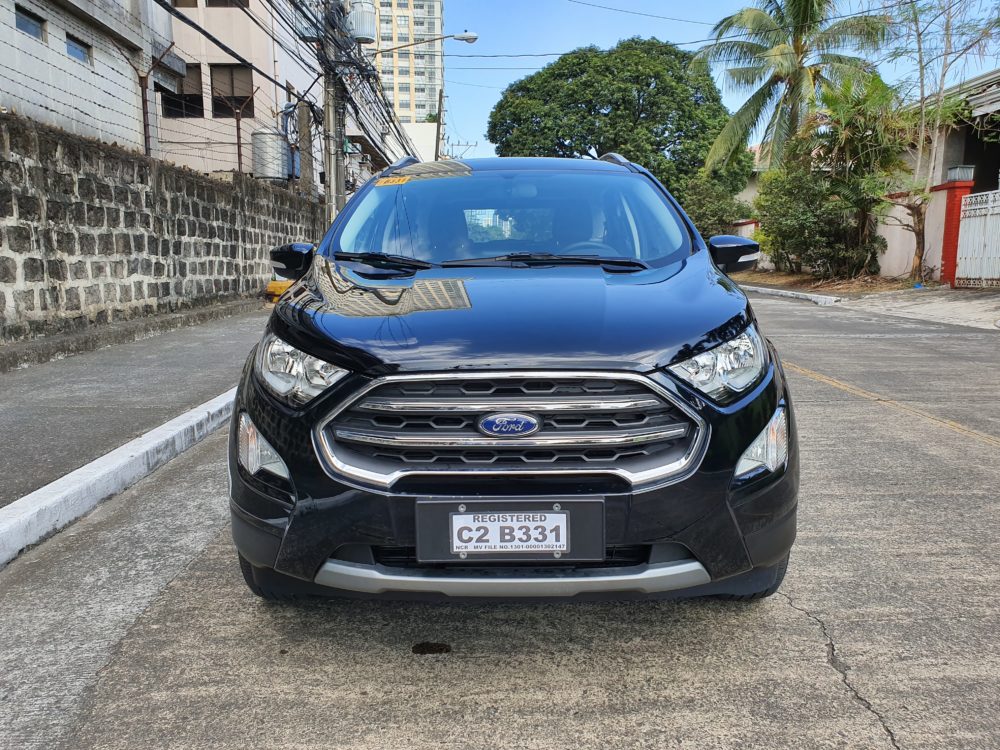 Another quite noticeable difference is that spare tire cover. It’s gotten bulkier since we last saw it. Earlier I wrote that the EcoSport was an urban warrior, and its size plays a big part. It’s not too small, and it isn’t too big. It’s literally just right! To quote Ford’s marketing material, it’s “Street Smart.” The car’s dimensions, the ride height, I just love it. If you’ve ever had the chance to drive a regular crossover like a RAV4 or something, this shouldn’t feel that different in terms of how far down the road you can see, and just the feeling you get next to bigger SUVs when in traffic. It’s just so comfortable. 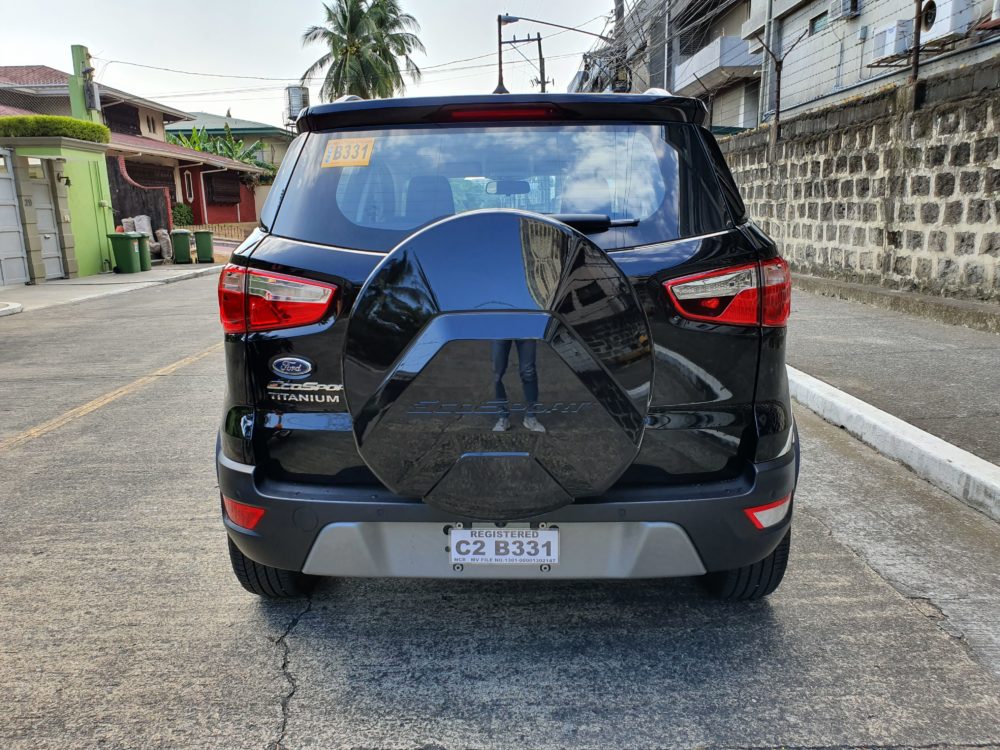 The capacitive keyless-entry was refreshing to see and use, especially compared to those rubber-wrapped ones we usually see. It did get some getting-used-to though. Even up to now, I’m not sure if I was supposed just pull the door handle when locked to open or tap the capacitive top of the door handle. –Because that’s what you do to lock the vehicle when leaving. So yeah. That was a bit weird. It kind of left me with trust-issues every time I was leaving the vehicle although I did find it cool, nonetheless. 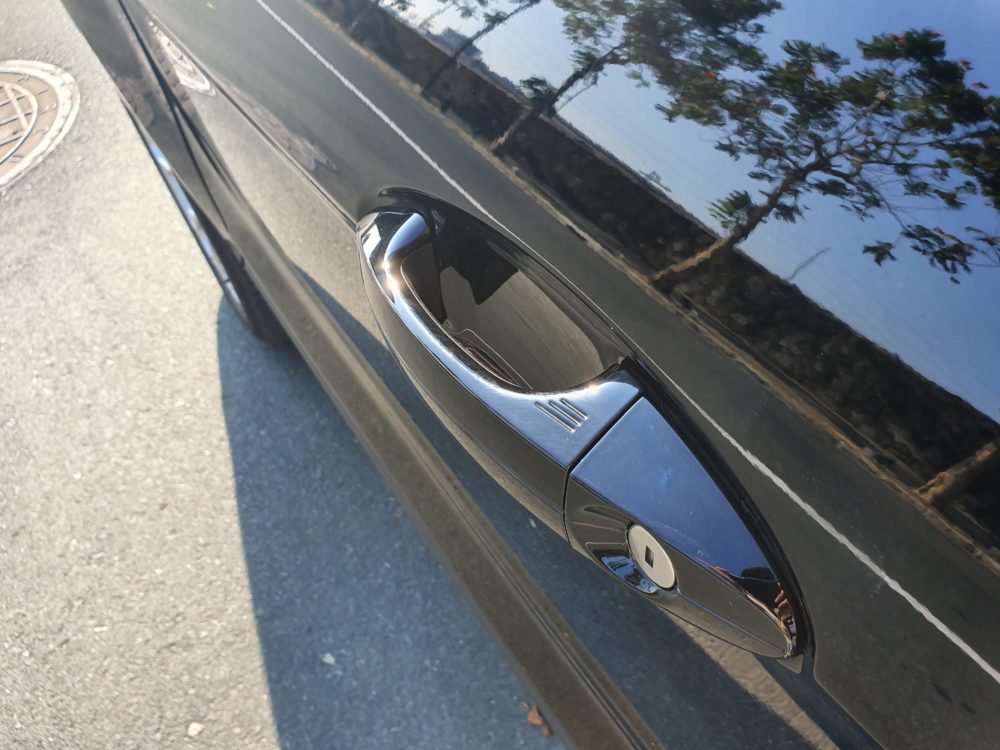 Overall, the refreshed look does give the EcoSport a more rugged and agile feel compared to the nerdier looking previous generation. In terms of looks, it’s basically a baby-Ford Escape in my eyes, and that’s not a bad thing! 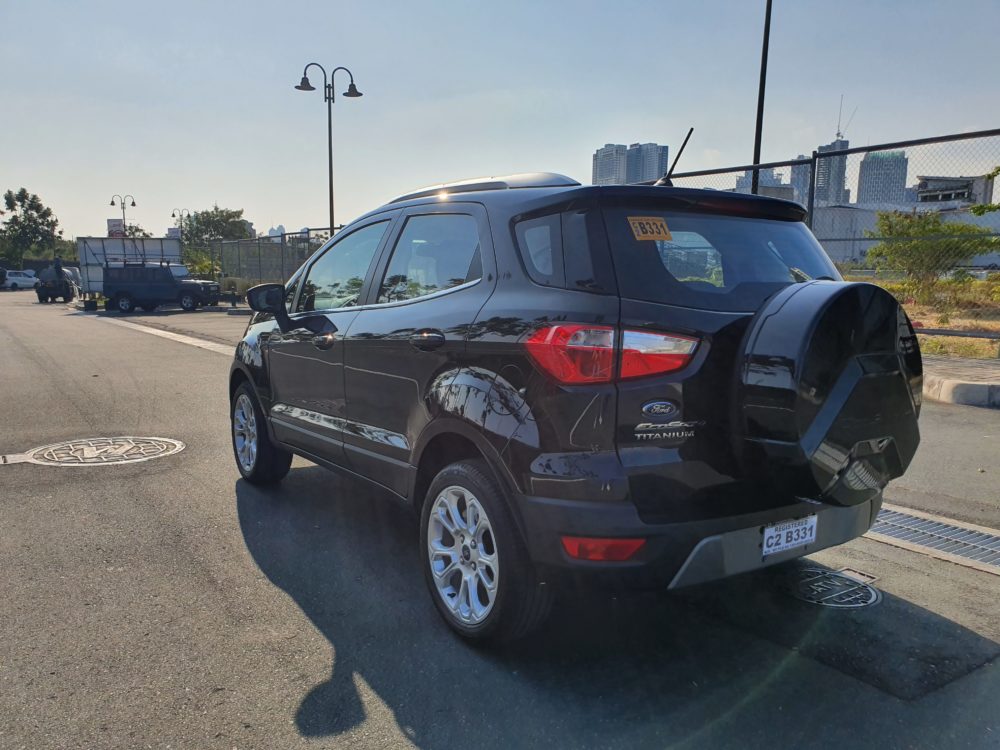 Once you figure out that capacitive keyless-entry mumbo-jumbo. The interior is where it gets way more interesting. At the center, it’s hard to miss that 8-inch LCD touchscreen infotainment unit, powered by Ford’s SYNC 3. It’s a blast! SYNC is probably my favorite automobile smart infotainment operating system. Especially in this third-generation version. It literally just works, and the layout makes sense since Ford basically wants you to be able to control as much as possible just with it. Those bezels though are thick, and that may leave you dissatisfied. I also don’t like how it’s kind of just planted there. It makes me feel like Ford was a bit lazy to think of a design that embeds the display into the panel. But its current placement does make it easier to reach of course, so maybe that’s why. 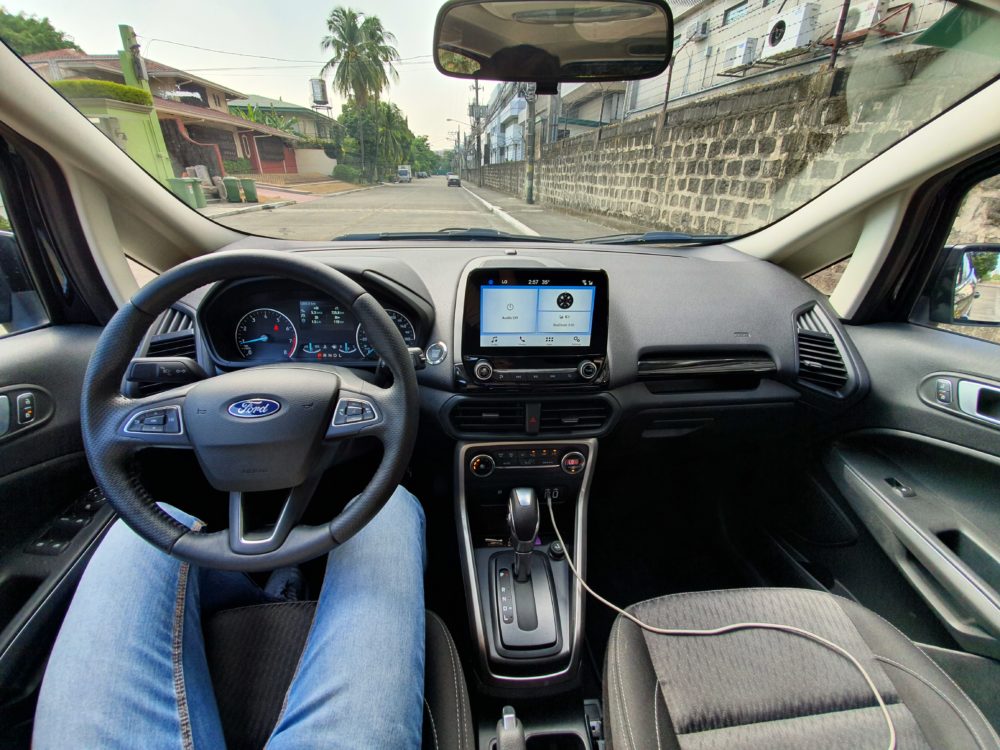 Listening to your favorite tunes in this thing is also amazing, something about the placement of the tweeters next to the door-handles just makes it so easy to appreciate your favorite jam’s highs, and no the low-end does not take that much of a hit either. Something about this stock sound system is just perfect, it gets me hyped to be on the road every time.

I absolutely love the new adjustable armrest console. It’s one of those novelties that you would just love to have when it’s there. The compartment under the console goes deep, it’s a bit narrow but appreciated. Behind it, you get an additional set of lock and unlock buttons, a thoughtful feature for your rear passengers. Although honestly, I would have preferred rear air-conditioning vents instead. Next, to the hand-brake, you get open compartments-galore. Two adaptive-cup holders, an area for your loose change, and another one for your phone I’m presuming.

At the center console, you can find the usual climate control, two USB ports for charging or initiating Apple Carplay or Android Auto, and next to it your traction control button. (Kind of a weird placement, in my opinion.) 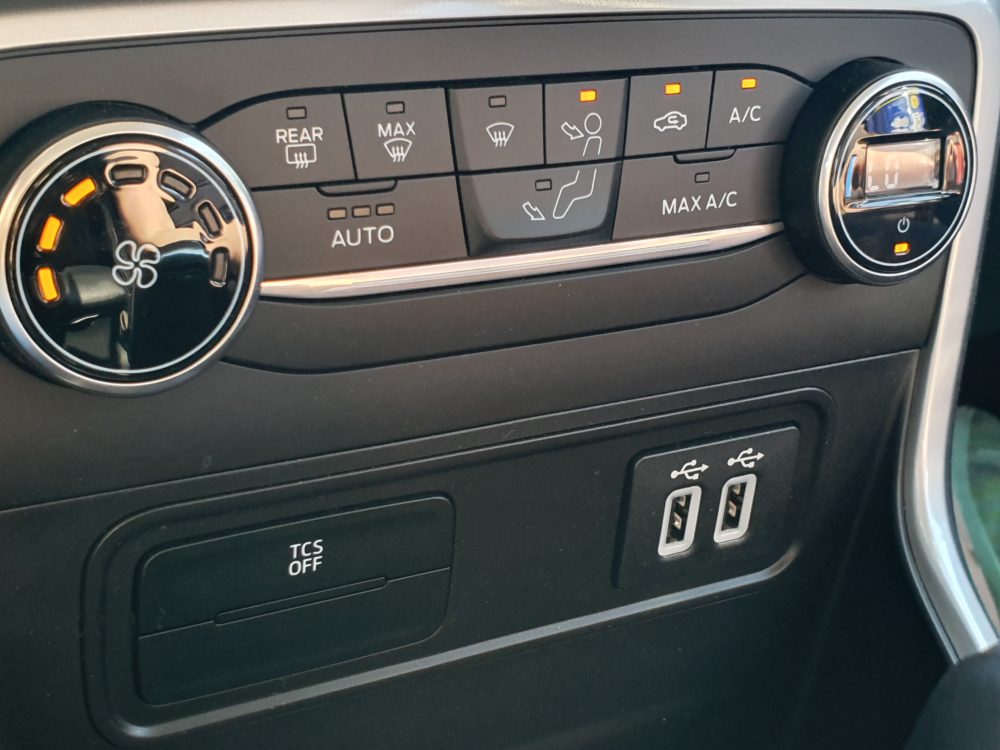 On the lower left side of the steering wheel, you can find controls for your height-adjustable headlamps, fog-lamps, and dashboard lighting.

You get a new digital instrument panel, that isn’t analog anymore. That acts as a speedometer, fuel consumption monitor and a settings menu for your EcoSport. You can control that plus the infotainment unit just with your steering wheel. I’m also not the biggest fan of the placement of that push-start ignition button, I feel like it would’ve ergonomically felt more comfortable if it was a bit lower, in-line with where the conventional key would go. 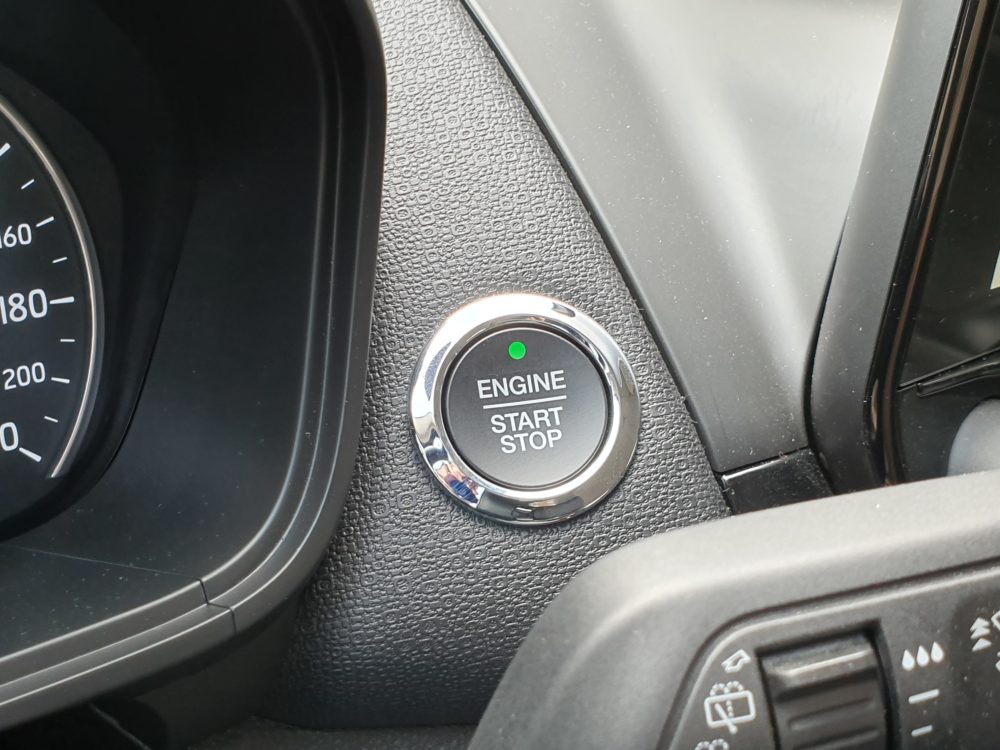 Before we move to the back at the rear passenger seats, I do regret to inform you long-time EcoSport fans that the secret drawer under the front passenger seat is gone. I really loved that thing. Damn.

So at the back, it can get quite spacious depending on however tall the people seated up front is, but headroom is arguably great for a sub-compact. I do like the addition of a 12V accessory socket back there, so your rear passengers can charge-up their devices as long as you provide them with a charger of course. 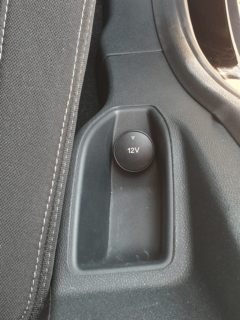 For cargo space, the EcoSport is a workhorse. You get 335 liters with the rear seats up, and an amazing 1,178 liters when folded down. So yeah, another thing that makes this such an amazing urban warrior is the amount of cargo you can haul when going on those weekend beach getaways!

Behind the wheel of the 2019 Ford EcoSport, I have never felt unsafe. The handling feels superb, but you might feel like it understeers by a smidge, especially if you’re used to the now more classic hydraulic power steering systems. The six-speed automatic transmission felt like it should, and I have no complaints. Breaking was never an issue for me as well, they’re responsive and there was never a loss in confidence in last-minute breaking scenarios.

When it comes to fuel efficiency, there’s no doubt that this vehicle is more Eco than Sport, right? On an average day in Metro Manila traffic, we got a read of 5.2-7.1 km/L. Which is flat-out surprising! –Especially from a vehicle of this caliber. Maybe they’ll fix that in the next one?

In conclusion, the 2019 Ford EcoSport 1.5L Titanium is quite the fun little crossover to drive. I still stand by what I said at the start of this review, I still truly believe that this vehicle was made for our developing roads. The addition of the new six-speed automatic system can give your expectations from this vehicle a run for your money, and I honestly think it’s very practical. Especially if you were interested in purchasing this one for your growing family, or even as your first car! Sure, the fuel economy numbers were surprising, but I feel like that was more of my fault in the end. I think I may have really put it to its paces a bit. I’m sure if you adjust the way you step on the pedal and don’t go all “It’s not about the ride, it’s the rider” on this thing, you’ll be fine.