As a motoring journalist, one of the things missed most due to the pandemic has been face to face events, but more so face to face drives. Lucky for me, with majority of the country switching to Alert Level 1, face to face events are coming back. Even luckier, my first event was with Honda, and not just with any car, but the ever popular all-new Honda Civic.

Honda invited me (and five other participants) to experience the all-new Civic, with a drive to the south. Our starting point would be BGC, through the busy highways of SLEX and CALAX, up the winding roads of Tagaytay, all the way to the twisty backroads of Ternate in Cavite. But wait, there’s more! Lunch was to be held at the famous Antonio’s restaurant in Tagaytay. Be still my beating heart. 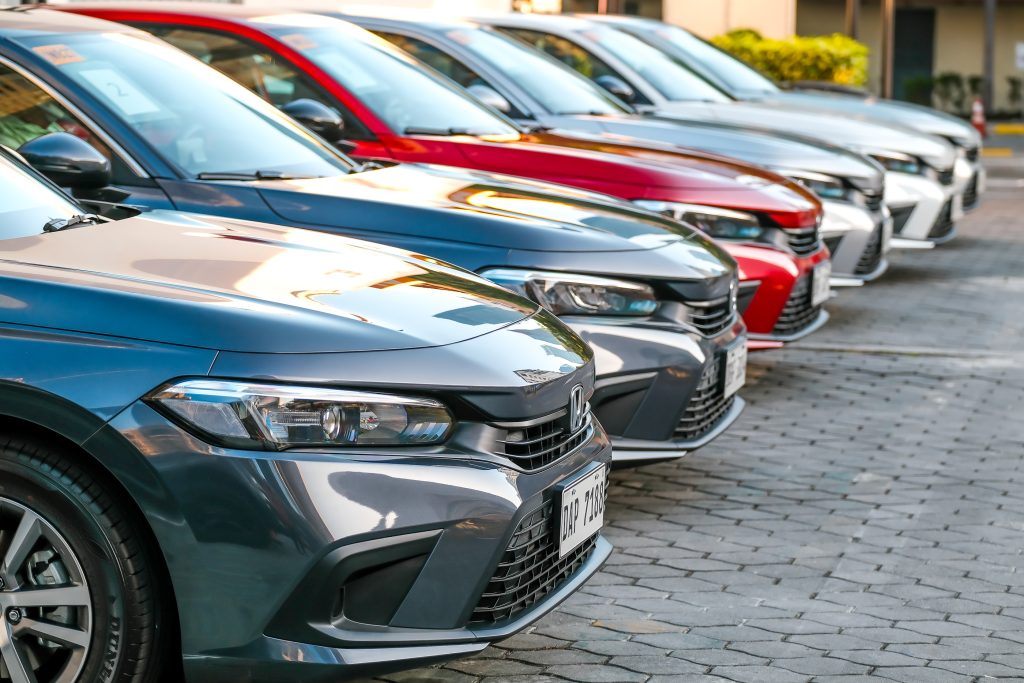 We were asked to be at BGC in Taguig as early as 6am to be able to have ourselves antigen tested (safety first). I woke up as early as 5am (bursting with excitement) just to be able to get to the venue as soon as possible. After a negative test result (whew) we were whisked away to the Lane O parking lot where a long line of Civic’s awaited. 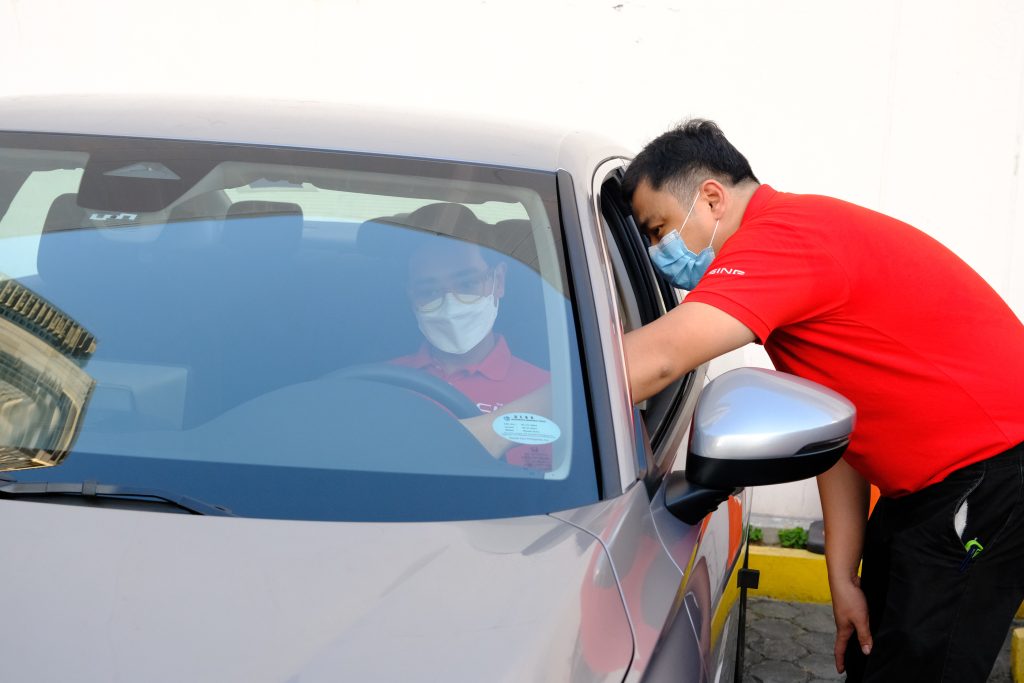 Before we could set off, we were briefed about the Civic’s Honda Sensing safety capabilities. Mind you, every variant of the Civic features Honda Sensing. Next, we were given complimentary (Starbucks) coffee and breakfast just to make sure we’d last until our scrumptious lunch break in Antontio’s.

After our safety bathroom break, as the clocked ticked to 7:30am, the convoy eased its way out of the already bustling BGC area and made our way south. 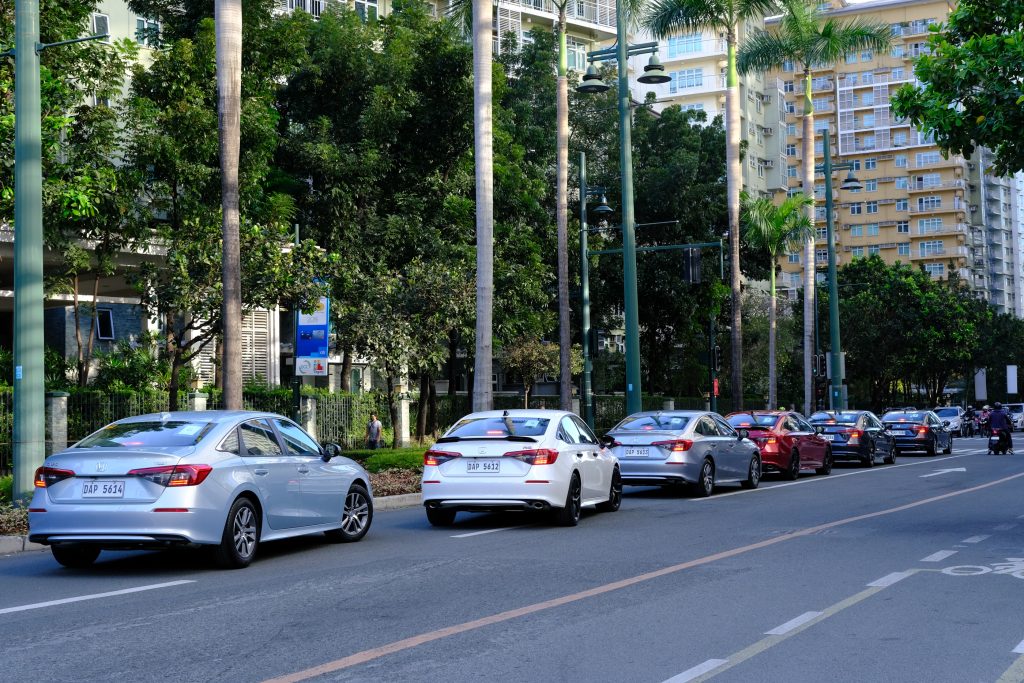 I need to point out that a typical media drive convoy consists of three major parts. First is the lead car, who’s tasked to make sure the convoy behind knows what lies ahead, calling out everything from stalled cars, roadworks and most importantly errant pedestrians and animals. Second is the media convoy, each equipped with our own radios (and wits), all we had to do was keep ourselves in line (as much as possible) stay out of trouble, and of course, enjoy the drive. Third is the sweeper car, think of the sweeper as a shepherd and his dog, making sure that the convoy is headed in the right direction, and any “stray” sheep….err…cars end up in the same place, (and in this case not headed towards the Batangas port and boarding the RORO).

The lead and sweeper cars were being driven by two members of the legendary Ramirez racing family, namely George and Louie. Who for the purpose of this article we’ll call Lead (George) and Sweeper (Louie). 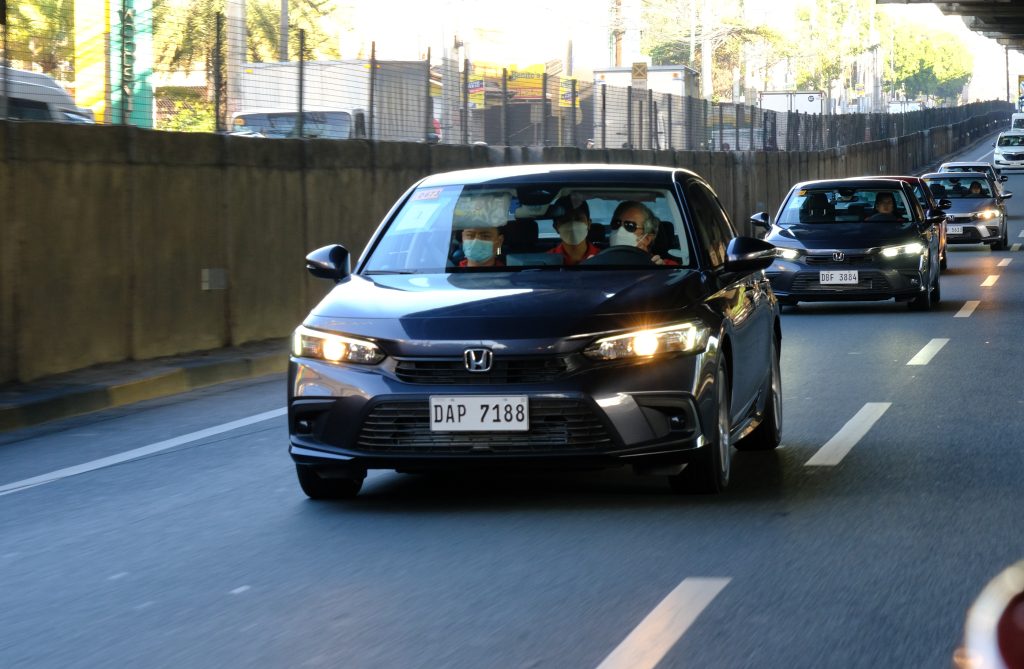 With that settled, as we reached the toll booths of the C5 entrance of SLEX, Lead corralled the convoy onwards towards CALAX. As we trundled along SLEX, Lead was instructing us to activate the Honda Sensing system, starting first with the Adaptive Cruise Control (ACC) with Low Speed Follow (LSF). Which when activated allows the Civic to keep a safe distance while maintaining the speed you set. So if you set your cruising speed to 100km/h (Yes we followed the law) the car will accelerate to reach it. Once a another car merges ahead of you though, the Civic will slow down and maintain a safe distance, if the car ahead accelerates, so will the Civic. It works in tandem with the Lead Car Departure Notification System (LCDN). It alerts the driver if the car ahead has moved from a complete standstill.

Next up was the Lane Keep Assist, It uses sensors to read the lines painted on the road, which the Civic then analyzes and makes sure to keep you in the middle of the lines. If you stray across the line, the steering wheel will vibrate. The “Trippiest” features though are the Road Departure Mitigation System with Lane Departure Warning (RDM with LDM). Trippy how you say? well, the system will actively “steer” your car for you. Yes, the steering wheel will move on its own, in order to keep you from leaving the road surface. It was pointed out to us however, that drivers input still matters, its not an automated driving feature, its just an assist. So our hands still needed to be on the steering wheel for the system to work properly.

Last but certainly not the least, the Collision Mitigation Braking System (CMBS), this system helps the driver avoid or reduce frontal impact by giving visual and audible warnings, it’ll even apply the brakes for you if necessary. It would be silly to test this system on purpose as it could lead to an accident, I was lucky (or unlucky?) to have experienced it first hand though when the car ahead of me stopped suddenly, and before my (slow) reactions could take over, the Civic did its job and stomped on the brakes (quite forcefully if I may add).

Overall, I have to say that the Honda Sensing system is a God send for any driver. It’s good to know that besides your own driving skills, the car is actively trying to keep you safe and comfortable at all times, ensuring a smooth drive no matter what. Speaking of smooth…. 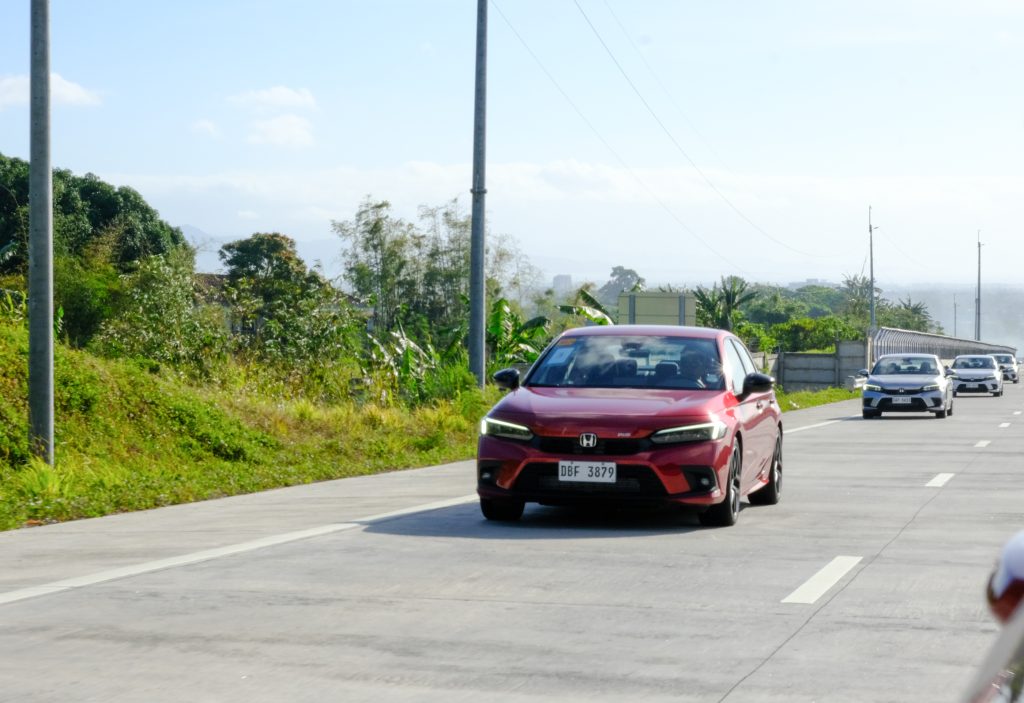 After traversing SLEX (which was busy as usual), we exited towards the quieter CALAX highway. Just as we eased into CALAX, Smooth Operator by Sade started belting out of the 6-speaker sound system courtesy of an infotainment system with Apple CarPlay and Android Auto. Just as that happened, it hit me, The new Civic is a Smooth Operator! On the highway the car was oh-soo comfortable and even as we reached higher speeds it remained stable and calm, road and outside noise was at a minimum, allowing me to appreciate the soothing vocals of Sade.

Before I knew it, we were at the Silang exit of CALAX (ending our highway journey for now). So began the trip up Tagaytay through the cramped and pockmarked roads of Cavite. As the going became “rough” I was pleasantly surprised by the Civic’s ability to handle the potholes and dips we encountered. Even if I approached every road blemish with bated breath and one eye closed, all I got was a mute “thump” every single time.

Eventually Lead and Sweeper escorted us out to the national highway leading up to the ridgeline, as we drove through the Tagaytay-Nasugbu highway time started to really be “of essence”. We therefore drove as quick (but as safe) as possible to reach Ternate. Of course, no situation is perfect and not all drivers are the same, so naturally the convoy started to “break apart” little by little, with me slap bang in the middle trying to keep up.

Right before we entered the “twisty bits” of Ternate we regrouped as a convoy, with everyone present, it was all systems go once more. The  Ternate roads have what I like to call a “Spaghetti” like layout on a cliffside, with a beautiful mix of mountain peaks and ocean views. It’s every drivers dream, although on this very day it was lined with heavy trucks and machinery (ARGH!). For about 20 minutes we crawled up behind trucks, desperately finding any safe opening that we could use to overtake. 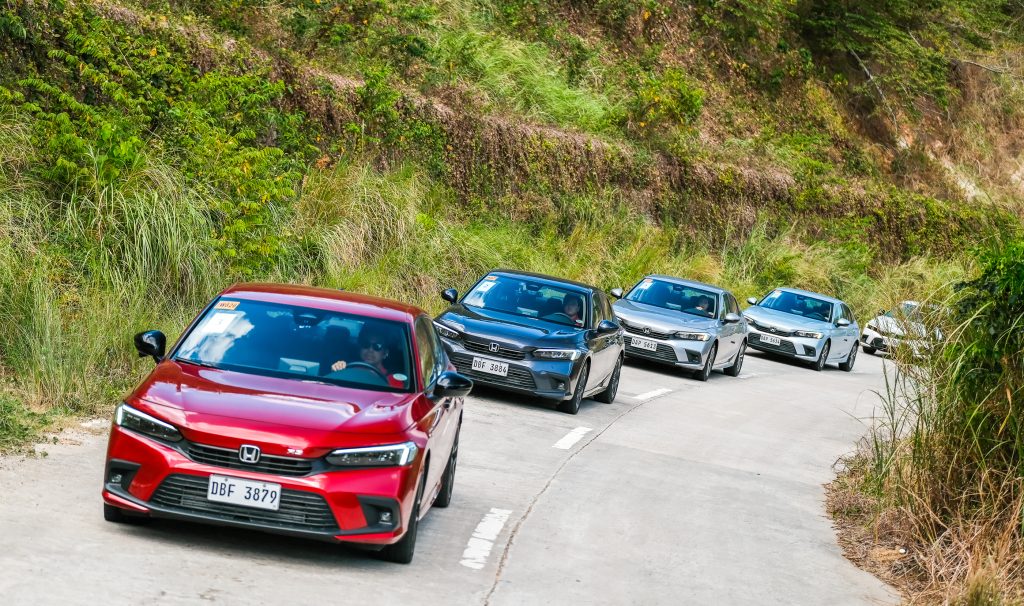 Thankfully, we were able to break through the slow moving vehicles, and really put the Civic through its paces. With Lead taking charge, we followed him through numerous sweeping corners, long straights, and up and down inclines. Again, the Civic rendered me speechless. You see, its equipped with a CVT transmission which is notorious for not being great at spirited driving (I remember lamenting the fact the car I drove had no paddle shifters). Still, despite numerous attempts to catch the CVT “off-guard” I was dumbfounded by how it anticipated my every move. Every stab at the throttle resulted in a timely downshift, and it held its gears perfectly at constant throttle pressure, I never bogged down on an incline, or was surprised by a downshift. It was as if the car knew what I wanted, when I wanted it.

The steering of the Civic is one of the best in the business, it’s light but not devoid of road feel, and it’s direct nature enabled me to point the car exactly where I wanted it to go. It’s the engine though that makes the Civic a true drivers car, the 1.5 liter turbocharged engine puts out 178PS and 240Nm of torque. It was smooth and quiet when it needed to be, but lively and eager at the slightest hint of spirited driving. 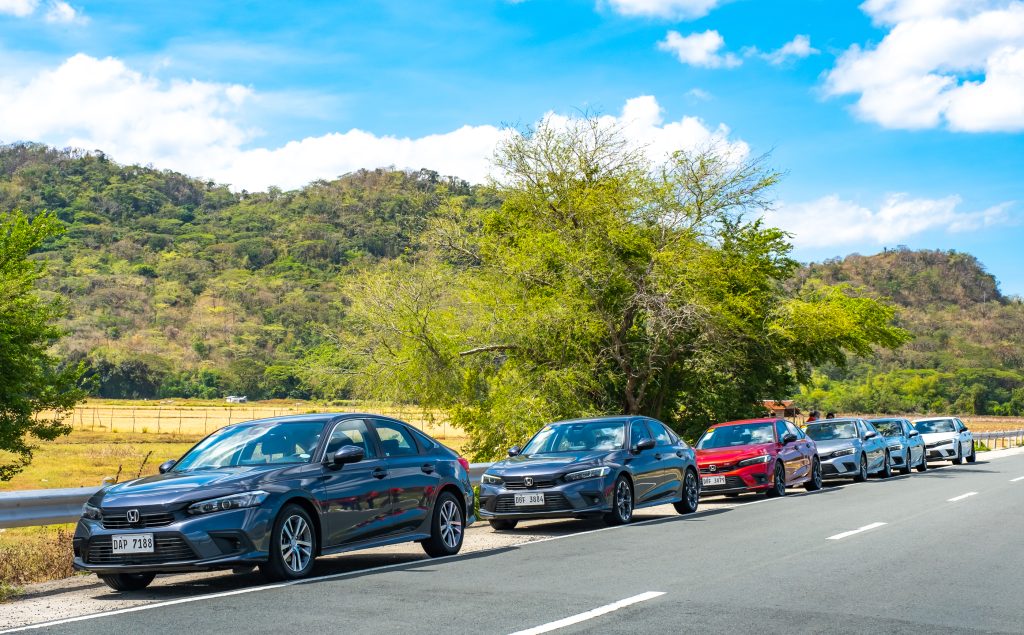 We reached our stopover destination on a long straight in the middle of Ternate, we clambered out to look for the nearest restroom (or bush) we could uhm…”relieve ourselves” on. It got me thinking, that whole dynamic driving experience, made me feel that the Civic is the first car in a long time I felt “connected” to. Where driver and car were one, and that’s high praise for any car, let alone a 4-door sedan. (Then again, that’s what a Civic is supposed to be able to deliver).

After our “stopover”, we made our way back up Tagaytay and onto Antonio’s. Upon our arrival, we were greeted by Honda executives who were there to join us for lunch. 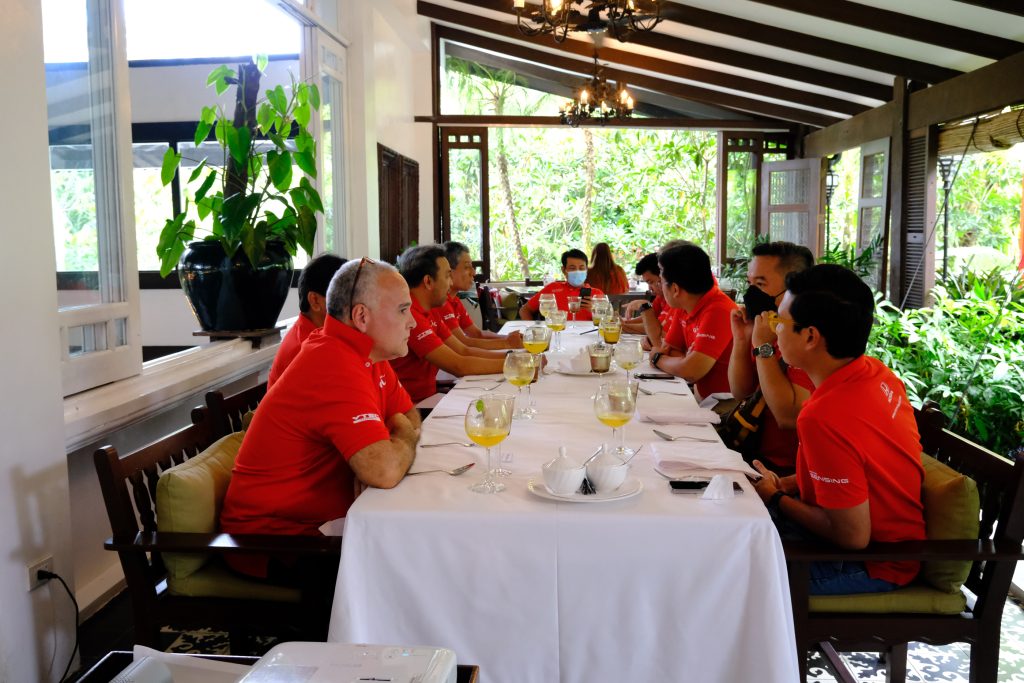 As expected the the slew of food prepared and served to us were impeccably made, and as we ate I asked the others what they thought of the Civic, and it seems everyone was impressed. We were also treated to a short presentation on how Honda’s Sensing technology is just the first step in it’s drive to make the roads a much safer place. It was even mentioned, how at some point in the future all Honda vehicles sold will adapt the Honda Sensing system.

With stomachs filled to the brim and a quick cup of coffee downed, the convoy was once again on its way back to BGC. We were lucky that despite it being a Friday, the convoy made it back on schedule at the Lane O parking lot at 4pm. 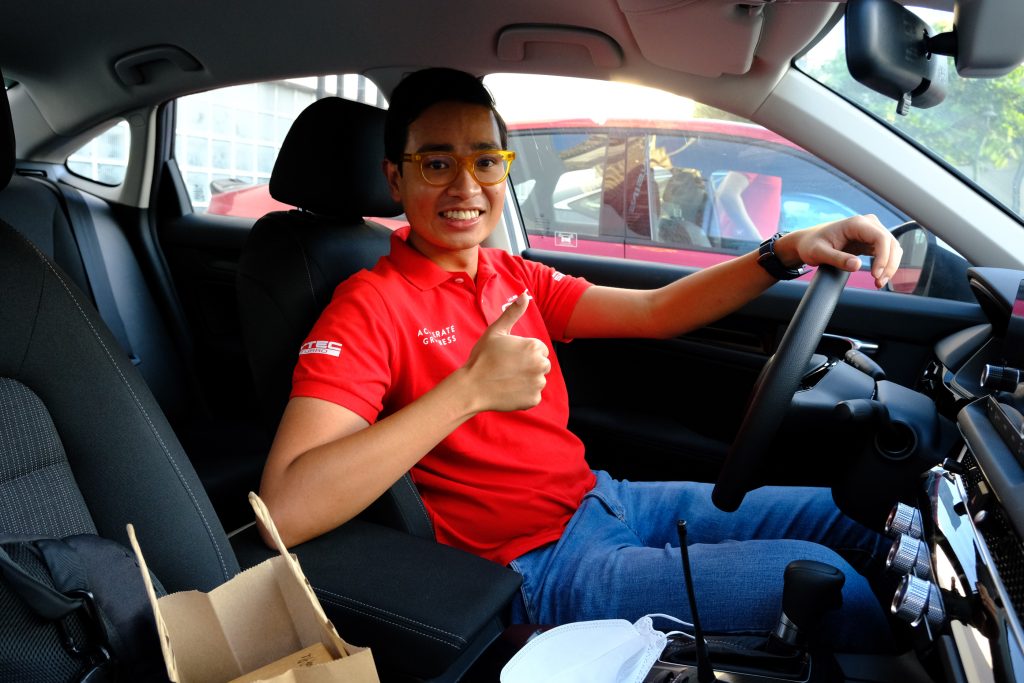 After thanking Lead and Sweeper for their guidance and care throughout the journey and Honda for inviting me to the drive, I slowly walked towards my own car, steeling one last glance at the Civic with its headlights glinting in the summer sun, I broke out humming and singing….Smooooooth Operatooooor