City of Manila Mayor Francisco “Isko Moreno” Domagoso has signed Ordinance No. 8772 into law, regulating the use of modified muffler/exhaust pipe and similar devices on all types of motor vehicles. 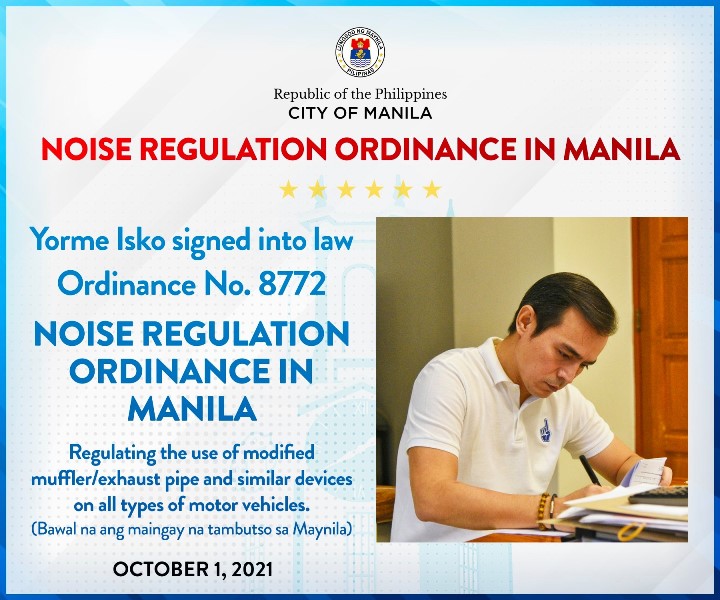 Ordinance No. 8722, or “Motor Vehicle Modified Muffler Noise Regulation Ordinance of the City of Manila,” aims to regulate and penalize all types of motor vehicles with modified muffler or exhaust pipes that emit excessive and loud noise.

Section 5 of Ordinance No. 8722 states that “It shall be unlawful for any person to use or operate a motor vehicle with a modified muffler that emits and produces noise levels beyond the national standard of 99 decibels (dB) taken at an engine speed of 2,000 to 2,500rpm.”

As for its penalty, the said Ordinance states that failure to install an adequate muffler or having a muffler system that does not suppress the noise but rather increase noise shall be reprimanded with the following:

It also notes that in case the motor vehicle of the offender fails to pass the noise level testing for a second time, the city government will undertake the necessary repair of the vehicle with the offender shouldering the cost of repairs. Now, if the offender refuses to submit his/her vehicle for noise level testing or surrender his/her driver’s license, or in any way resists the impounding of his/her vehicle, such acts will be presumed to be a willful violation of this Ordinance.

Meanwhile, motor vehicles designed for use in “sports competition, motor shows, and those with a displacement of 400cc and above” shall be exempted.

In line with these mandates, the Manila Traffic and Parking Bureau (MTPB) and Philippine National Police (PNP) shall serve as the lead agencies in the enforcement of this Ordinance with the following responsibilities:

• Report, apprehend and maintain the records of all violators and ascertain how many times an offender has violated the Ordinance.
• Collect and safeguard all copies of Ordinance Violation Receipts being issued by duly authorized enforcement officers.
• Collect and safeguard all confiscated driver’s licenses and return the same to its owner once the pertinent conditions have been met.
• Accredit official motor vehicle repair shops that may undertake the repairs of the vehicles of offenders.
• Coordinate with the Land Transportation Office (LTO) for the proper implementation of this Ordinance.

Ordinance No. 8722 has been presided by Vice-Mayor and Presiding Officer, Maria Sheilah, and has been attested by Secretary to the City Council Luch Gempis, Jr; Mayor City of Manila, Francisco Domagoso and Secretary to the Mayor Bernardito Ang.