After the news that the Ford Territory has reached sales exceeding 10,000 units, here’s another bit of news. Folks over at the local Ford dealership have said the same thing about the good-selling crossover: there will only be one variant available in the Philippines. For now. Yes, those who want to partake in getting their own China-built Ford Territory will have the EcoBoost Titanium+ CVT as their only choice.

It’s the top-of-the-line model Ford Territory model, that’s supposed to be okay, right? Well, yes, and no. One would expect all the bells and whistles to come with the Titanium badge. They sort of do, but now with the exception of three features. We had a quick chat with sales representatives from various dealerships and they were all unanimous in saying that the new batch of Ford Territory deliveries will no longer have a wireless charging pad and seat ventilators. There’s a third feature that’s supposed to have been taken out, albeit minor, but we’ll get to that later.

The wireless charging pad is (or was) found in the pocket of the center stack console. It’s always been a nifty feature but unless you have a (semi-) flagship model phone, you don’t really have wireless charging capability. Besides, there are USB ports anyway. Yes, those are not wireless, but it gets the charging job done. 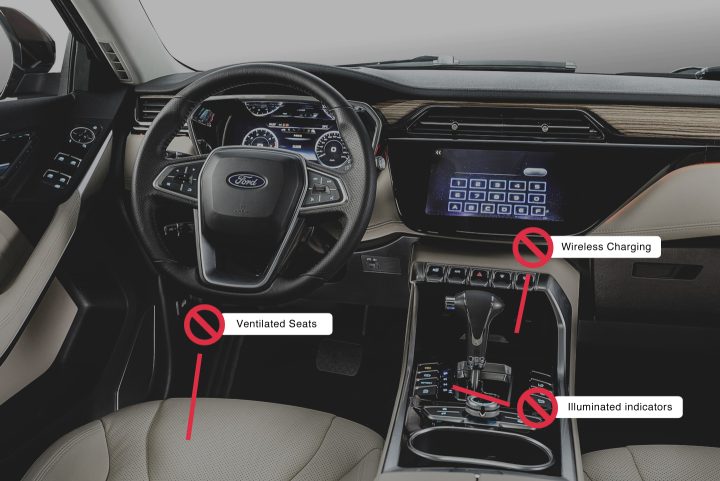 On to the seat ventilators, both front seats of the previous batch of Territories had them. Not anymore. We really do think that this is an upscale feature that belongs on higher-end cars, and to have it in a smaller model is a novelty, but no less functional. We’re a tropical country, and with leather upholstery, these would’ve come in handy in cooling your, err, seat, especially if you had no choice but to park in an uncovered space. Boo.

And now, on to the most minor detail. Owners or those who might’ve test-driven the Territory will have noticed that the Feature buttons on either side of the shifter (parking brake, brake auto hold, Sport mode, lane keep, automatic parking, and corner sensors), as well as the gear indicator, have this cool, blue illumination. Supposedly, this lighting feature will be or has already been removed as well. What’s curious is that after checking some units from the new batch, the lights are still there. Like we said, this is minor, but losing it will be reminiscent of a certain Japanese brand’s 7-seater shifter console that’s also unlit. Minor, but quite a relevant thing to take out.

While we’re on the topic of missing features, Ford PH also seems to have a bit of a predicament with some interior bits. Again applying to the new batch, they don’t come with floor mats and a tonneau cover. While this may not be true across all sales and dealerships, we were told that a great number of customers will have to wait a bit longer for these to be handed to them. At least they’ll still get to bring their new Territory home, right?

Currently, both Trend and Titanium+ variants are still on the Ford PH website. If you want to know what set them apart, you can always pay a visit to the site and download a brochure here.

Ford’s been getting a pretty good and high share of the sub-compact crossover market in the PH because of the Territory. The model’s sales numbers are a testament to that. Ford PH seems to have noticed how it sold more than the Trend, being just marginally higher-priced than the entry-level model, and this is a big reason as to why the Trend has been dropped; at least according to their sales reps. We think that this is actually a good move, except for the fact that they also cropped out a number of features from the Titanium. They may not be the most important ones but they’re small “luxuries” that people have now started looking for.

Either way, Ford’s riding on a high and are pretty confident that they won’t be deal-breakers. Are they right? Let’s all just wait for their next sales reports in the PH market.

EKartRaceway, PH's first indoor karting track to open on May 1, 2022