Scooters are arguably the most convenient form of transportation especially around the busy streets of the metro. If you’re reading this, there’s a high chance you’re either thinking about investing on your first motorbike, looking for an upgrade or maybe you’re just simply appreciating these two-wheeled beauties. In any case, the Honda PCX 150 is something that might be the answer to your little problem. Let’s go and check it out! 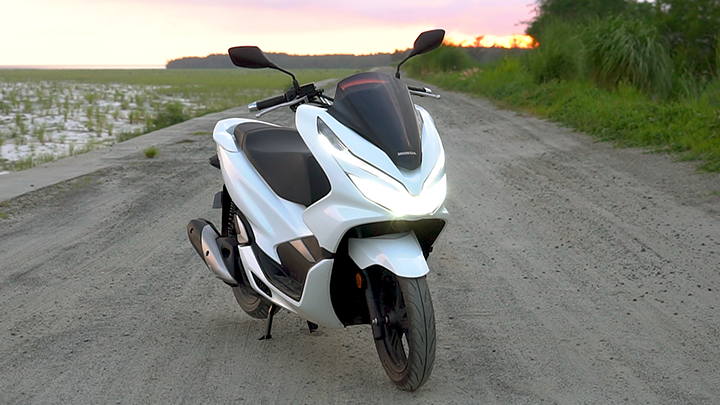 Now before anything else, the PCX lineup isn’t exactly a new player in the market. It’s been around since 2011, launched in different parts of the world like North America, Europe, and of course Southeast Asian countries such as the Philippines. It has gone through some minor facelifts over the years, but for the most part, it’s always been that premium looking scooter that Honda’s pegged it to be. And having received a good amount of attention from local scooter communities, this bike might just be the next thing you’ll be seeing in your garage, so let’s dive in a little deeper.

Powered by a 150cc, liquid-cooled SOHC Fuel-Injected engine that puts out a maximum power of 14.48hp and a maximum torque of 13.6Nm (Neuton Meters), the Honda PCX 150 is no slouch when it comes to power delivery. This premium commuter is mated with V-Matic CVT Transmission, giving instantaneous power at a twist of a throttle. It’s got an 8 Liter fuel capacity with a claimed average fuel consumption of 51.3 km/L, giving the rider a total distance of roughly 410 kilometers before needing another refuel–that’s quite the distance! The PCX 150 is powered by Honda’s eSP technology, giving it better fuel efficiency and a more quiet engine startup thanks to its ACG starter. It also comes well equipped with Honda’s Smart Key System, which means you can unlock the bike even with the key in your pocket just like the updated Honda Clicks and the more recent Honda Airblade 150. 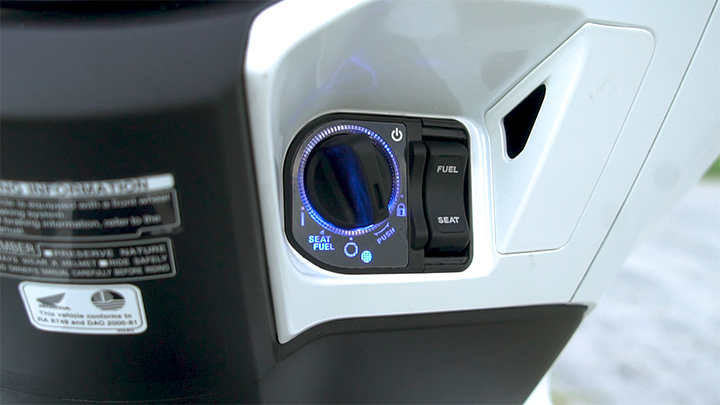 It has an Anti-theft alarm button along with Answer back technology on the keys to keeping your bike nice and secure, while other safety features include auto-shutoff whenever the side stand is activated and locks automatically the moment you step about 5 feet away from the vehicle. 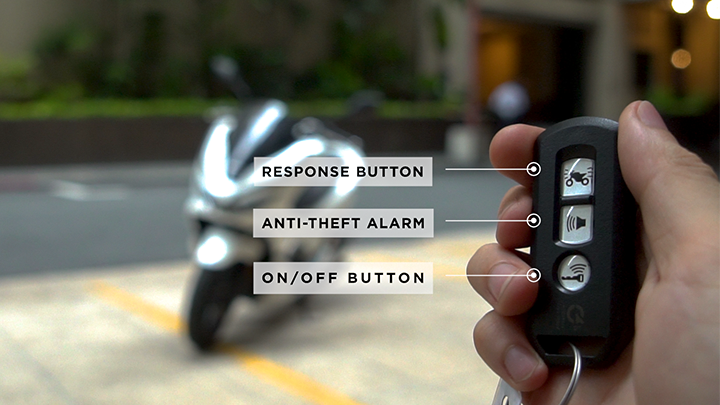 When it comes to appearances, the Honda PCX looks like it’s definitely a head-turner, and rightly so. The maxi-scooter design makes for a comfortable riding profile but at the same time also shares some sharp contouring giving it a bit of a sporty edge. 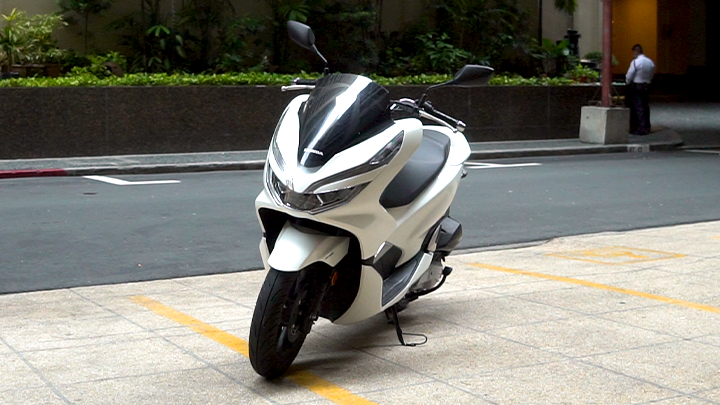 Plus, the white and black colors give off that ‘Stormtrooper‘ look, which I think is more eye-catching than its darker counterpart. The PCX 150’s headlight assembly is also quite huge, coupled with a sporty looking tail light, both of which are LED. 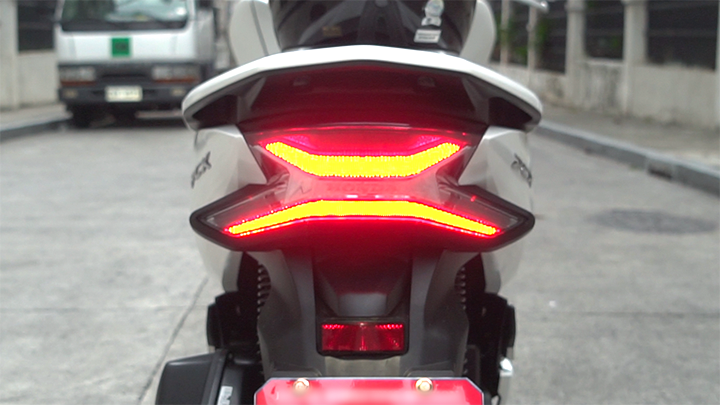 Right in the middle of the handlebars sits the dashboard, paired with a digital instrument panel that displays your speedometer, fuel gauge, average fuel consumption, trip meter, and of course an onboard clock, while at the sides are backlit indicators for things like your signal lights, Hi-Beam, and check engine light. 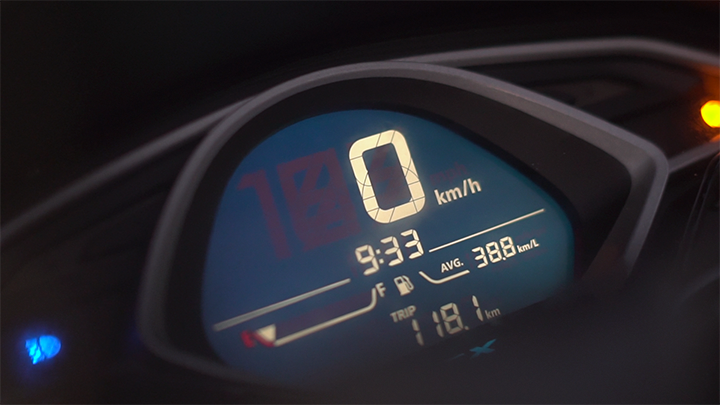 Controls are pretty standard on the left side, while on the right we have your engine start, hazard lights, and an idle on or off switch, which helps keep fuel consumption efficient especially in stop and go traffic situations. 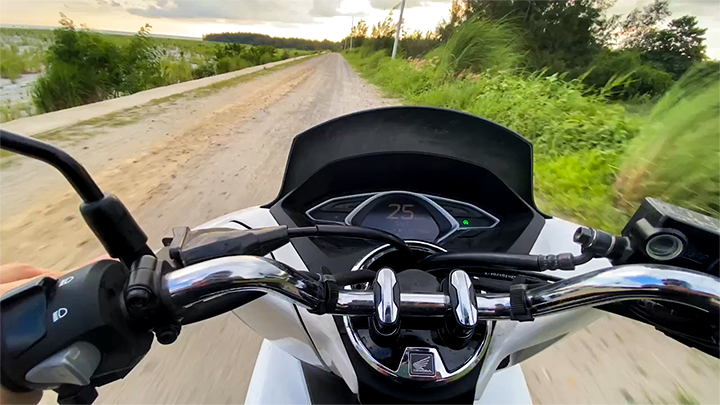 The handlebars are exposed with no form of plastic cover which sort of reminds me of those old scooters back in the day like the Honda Joker, which I think is a nice retro touch. I’m sure a lot of people will be 50-50 in this department, but I have grown to like them a lot. The PCX is also conveniently equipped with a split-step board that sits at the bottom, with a removable rubber lining for easy cleaning, while the gas tank is fully accessible in between your legs for easy refueling during pit stops. 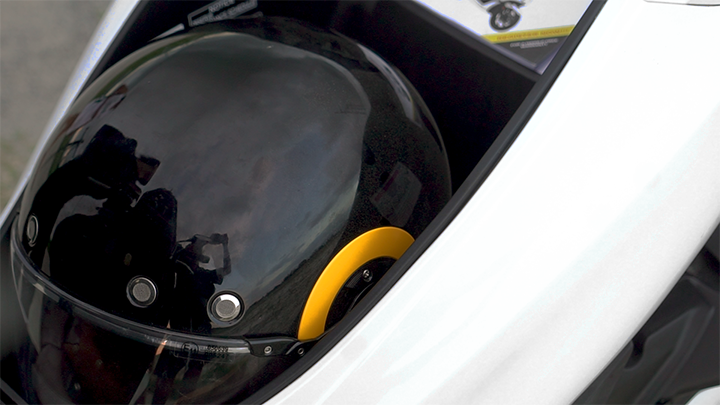 As for storage, the Honda PCX has an enormous 28L capacity, that can easily fit either a full or half faced helmet and even a few other knick-knacks like gloves and important documents. We also get a push activated panel on the left side, exposing the hidden compartment which comes with a built-in 12v power socket for charging your device on the go. 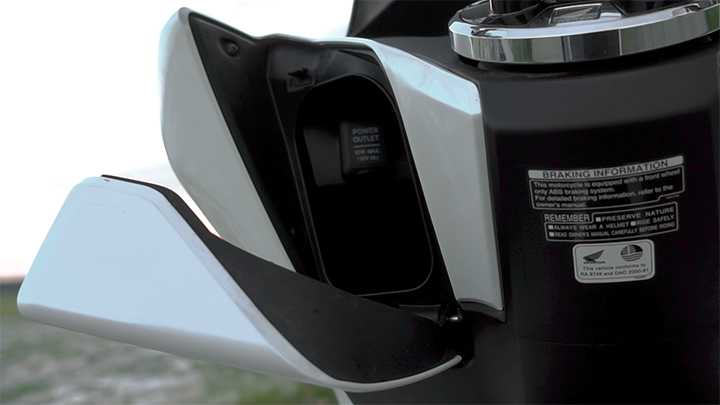 Being one Honda’s premium commuters, it’s quite a beefy ride compared to something like the Honda Click. But don’t be fooled as maneuvering this two-wheeler isn’t any different from the smaller scooters you might be more used to. It’s light, handling is quite easy, and zipping around the metro is more effortless than you might think. 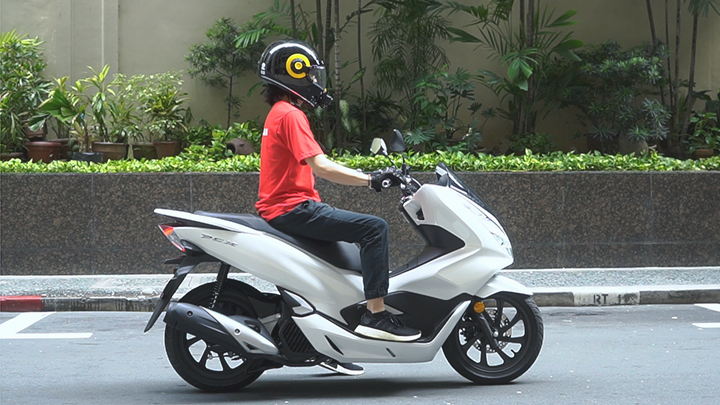 The Honda PCX 150 has a comfortable seating position and is easy to balance.

Size-wise, it’s definitely on the larger side of things, but with a low center of gravity, I found that weaving in and out of traffic is still a no brainer for this machine. And for a person who has a height of 5 feet and 7 inches, not only was my butt sitting nice and snug, but I was able to reach the floor with no problem and didn’t have to tiptoe to keep the bike upright–a pretty important factor in stop and go situations. 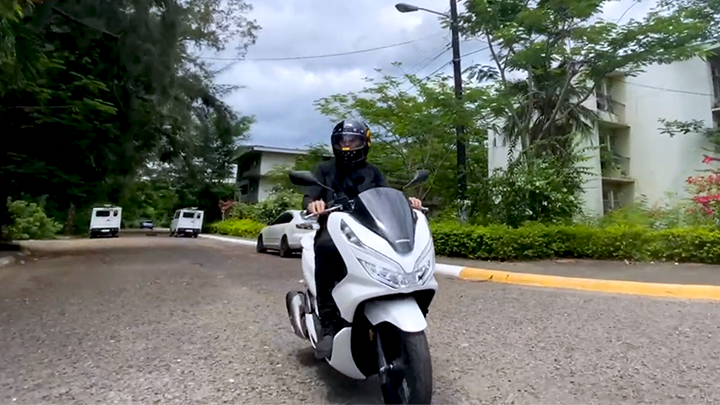 When it comes to performance, the PCX delivers the job both in the city and outside the metro. Acceleration is smooth and quick, being able to go from 0-60kph in just a few seconds, while I was able to reach a top speed of 108km/h, which should be plenty enough for getting around the city. As for fuel economy, the best fuel consumption I got was 50.2 km/L, while using the throttle aggressively still gave me a pretty respectable 40.7 km/L.

The PCX comes with 14-inch alloy wheels and is equipped with a disc brake at the front and a drum brake on the rear. Braking on the PCX is nice and responsive, while ABS helps prevent the wheels from locking even if you squeeze as hard as you can. The dual rear-mounted suspension has some good play, especially with a heavier load like when you have a passenger riding with you. Overall despite going through some cracks and bumps along the road, the ride was still pretty smooth so I’m gonna have to give a kudos to Honda for that.

All in all, the PCX 150 is undoubtedly an enjoyable daily driver. The wide seats paired with an upright seating position make this one of the most comfortable small-displacement scooters you can currently get your hands on. And with some nice features like ABS, a Smart key remote, and a built-in 12v charging socket, this two-wheeled automatic is going to be ready to meet the demands of any modern rider. 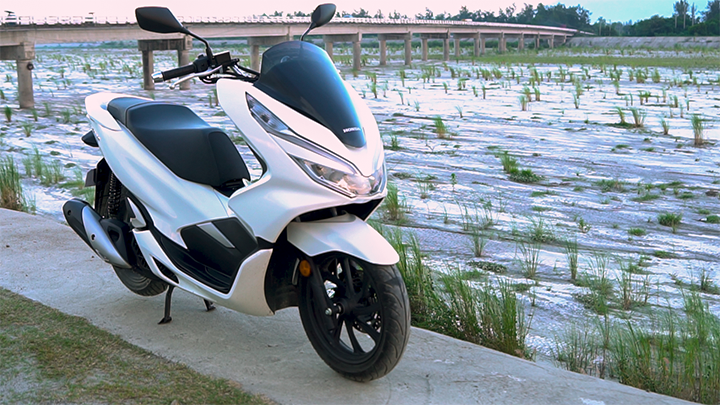 The Honda PCX 150 comes in at a price of Php 133,900 and is available in Pearl Jasmine White or Poseidon Black Metallic in Honda dealerships nationwide. It has premium features, nice seats, and a reliable engine. What more can you ask for?