I’ve always been a fan of the Honda City. Imagine my glee when Honda Cars Philippines brought the City RS in. “Wow, RS, top-spec, all the bells and whistles, yo!”, was one of many thoughts in my head. We recently got our hands on it and I got to experience it firsthand. Is it as enjoyable as I always thought it was? Did it come with everything including the kitchen sink? Will it live up to the “RS” expectations of all the other models with the same badge? Let’s find out.

The Honda City RS Sedan is quite far from its predecessor, but is it a good thing? 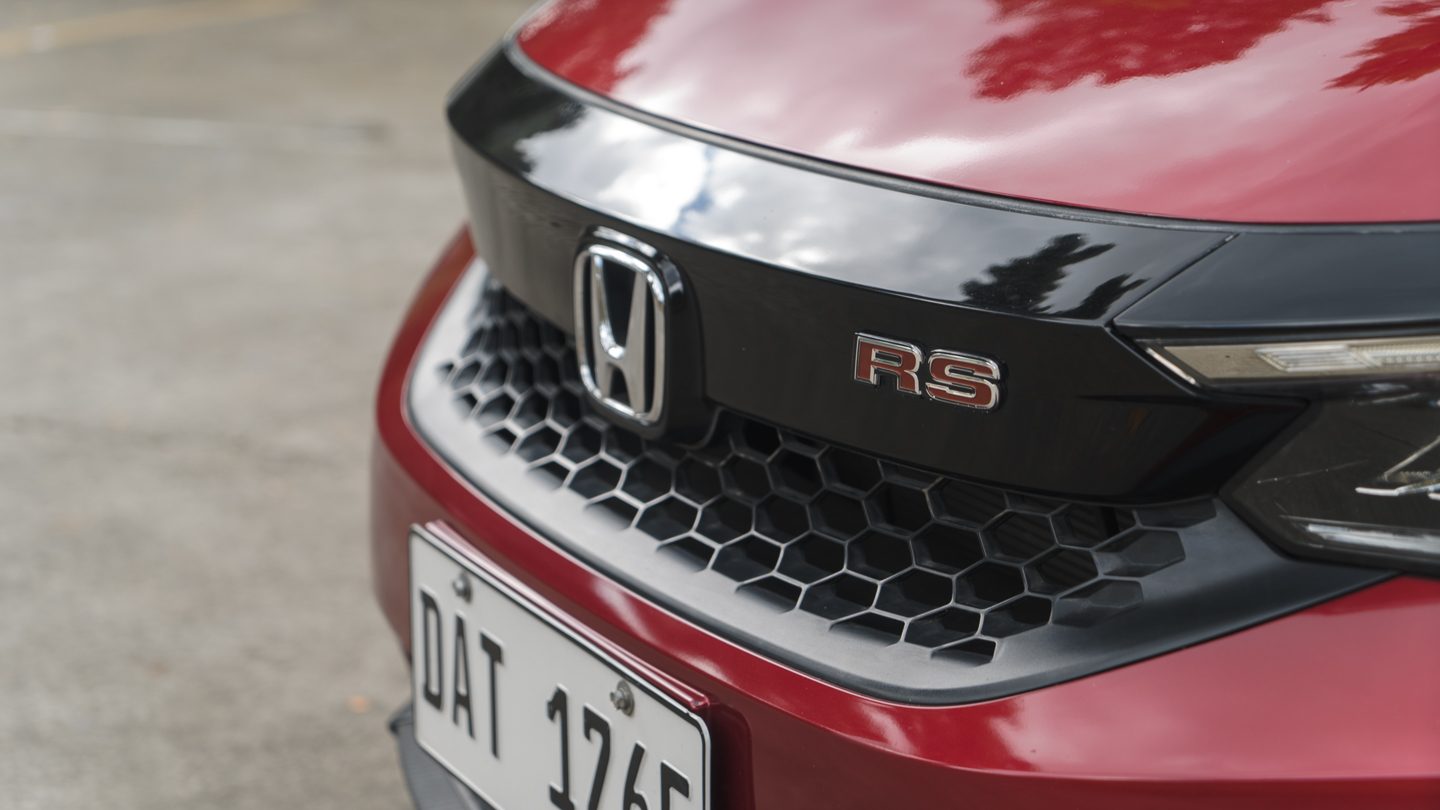 As far as the looks go, I really liked the previous model better, but only just. The more streamlined design of the older model was, to me, more cutting edge as far as the City’s evolution goes. But as it has come for almost all cars in the Honda lineup, this one has a good mix of smooth edges and an overall “rounder” appearance. It’s still a pretty thing, though, don’t get me wrong. As I said, the older model is better looking for me, but only by a slight margin.

The 2021 City RS (this specific model is a 2021 release, but the test unit we got is a 2022. No difference, so don’t worry) looks strangely like a Civic mini-me. Up front, you’ll find a clamshell hood bordered by a glossy black trim piece. This said piece incorporates neatly into a thicker “plate” that sports the RS and [H] badges. It also tops off the winged headlight assemblies and makes the thin DRL strip stand out more.

Honda again opted to give this top-spec model a honeycomb-patterned upper and lower grill, as is expected of the “sportier” RS variant. There isn’t any body kit that comes standard, but that little bit of aggression is provided by the foglight housings and its accompanying bulge on the bumper. Not an air dam, but sporty nonetheless. On the side, you’ll see the similarity with the Civic. The headlights are raked back, the greenhouse, beltline, and character line are pretty high up, and the lower accent line juts out just a little bit to give the City RS a good mix of elegance and a more youthful vibe. The side mirrors are also finished in glossy black, so that keeps up with the overall theme. The only odd thing here is how the wheelbase looks a bit short from this angle. It handles pretty well, and we’ll get to that later, but hey, this is a sub-compact sedan, so we can’t expect a long(er) wheelbase. Still, it’s a good look. 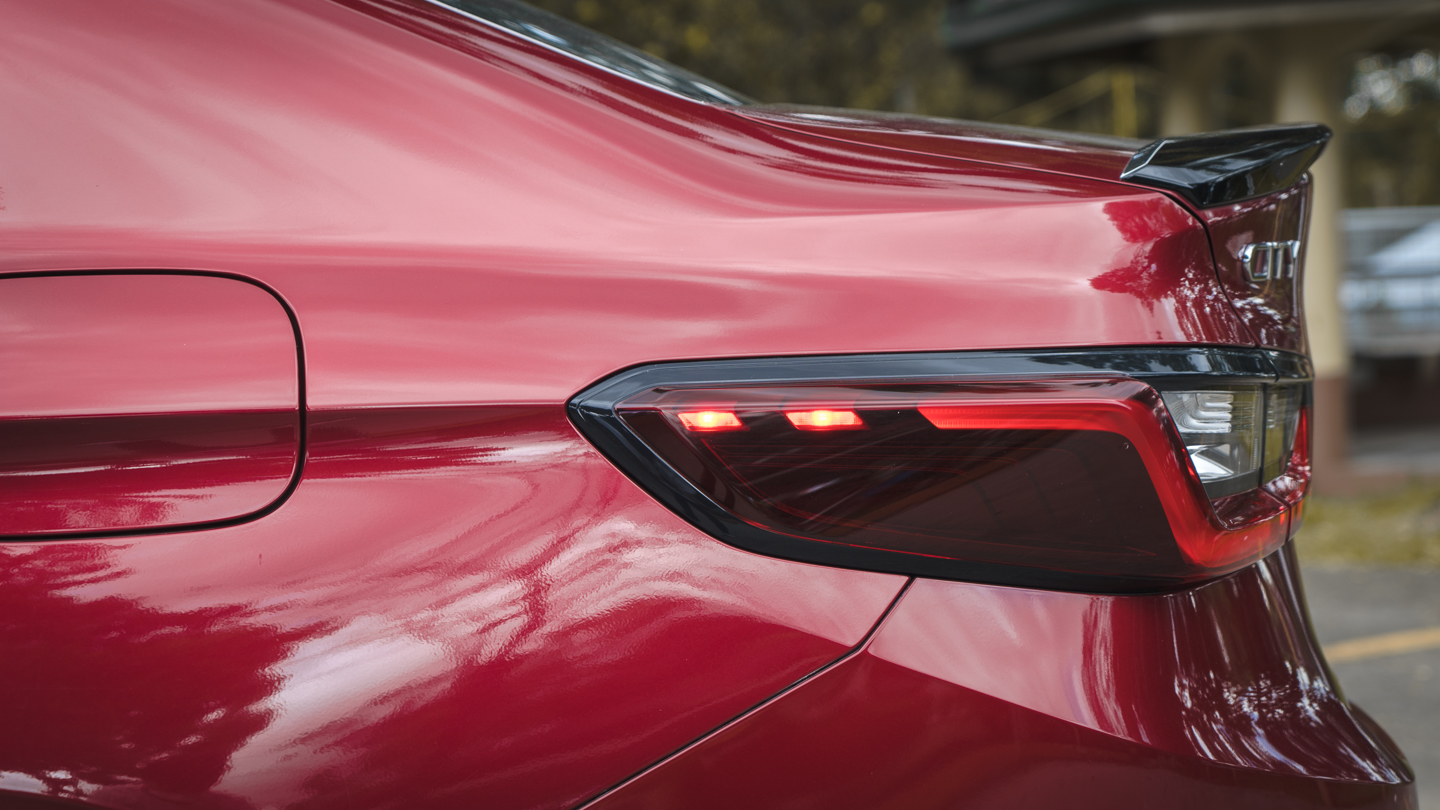 As for the rear, you get a good mix of the aforementioned sharp and rounded corners. All that edge is provided by the handsome taillight units. They’re blacked out, too, and that’s something that looks sporty on any vehicle; Honda just does it best, in my opinion. The same bulge on the front bumper care of the foglight housings is also found in the rear, this time housing two vertical reflector pieces. Aside from the badge, a glossy black ducktail on the trunk lid plus a rear bumper diffuser gives the go-fast look of the City RS. Overall, it’s a cohesive design outside and though it might take some getting used to, it’s a look that simply works. 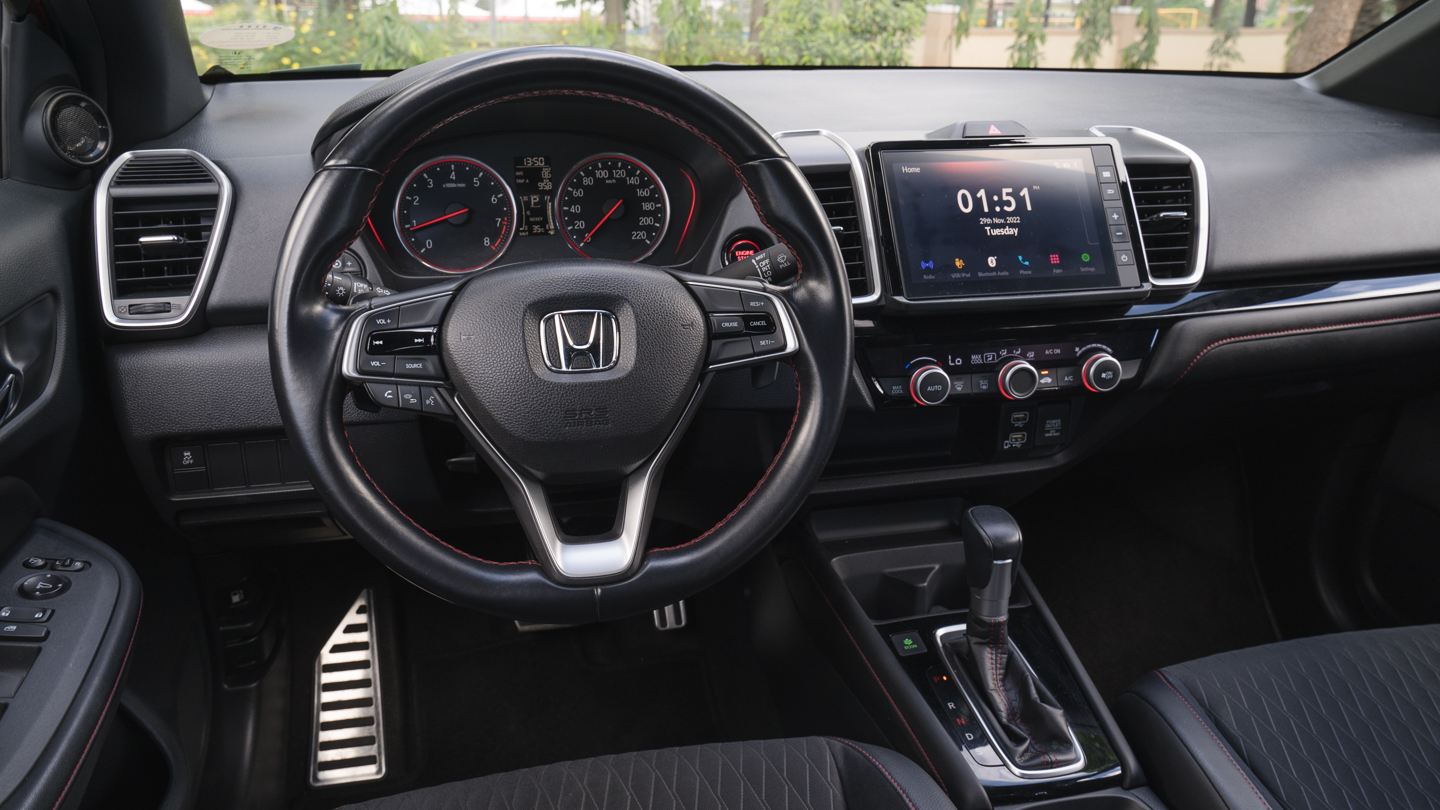 Inside the City RS it’s a whole different story. A new design is to be expected, and that makes up much of what’s different. The dashboard is still a massive piece that stretches a lot toward the driver, but surprisingly, visibility from the hood and farther is not compromised. Gone are the horizontal aircon vents that are replaced with vertical ones. The center vents in the City RS border the new infotainment system, which is neat, literally and figuratively. And the silver frames on the vents are quite elegant. 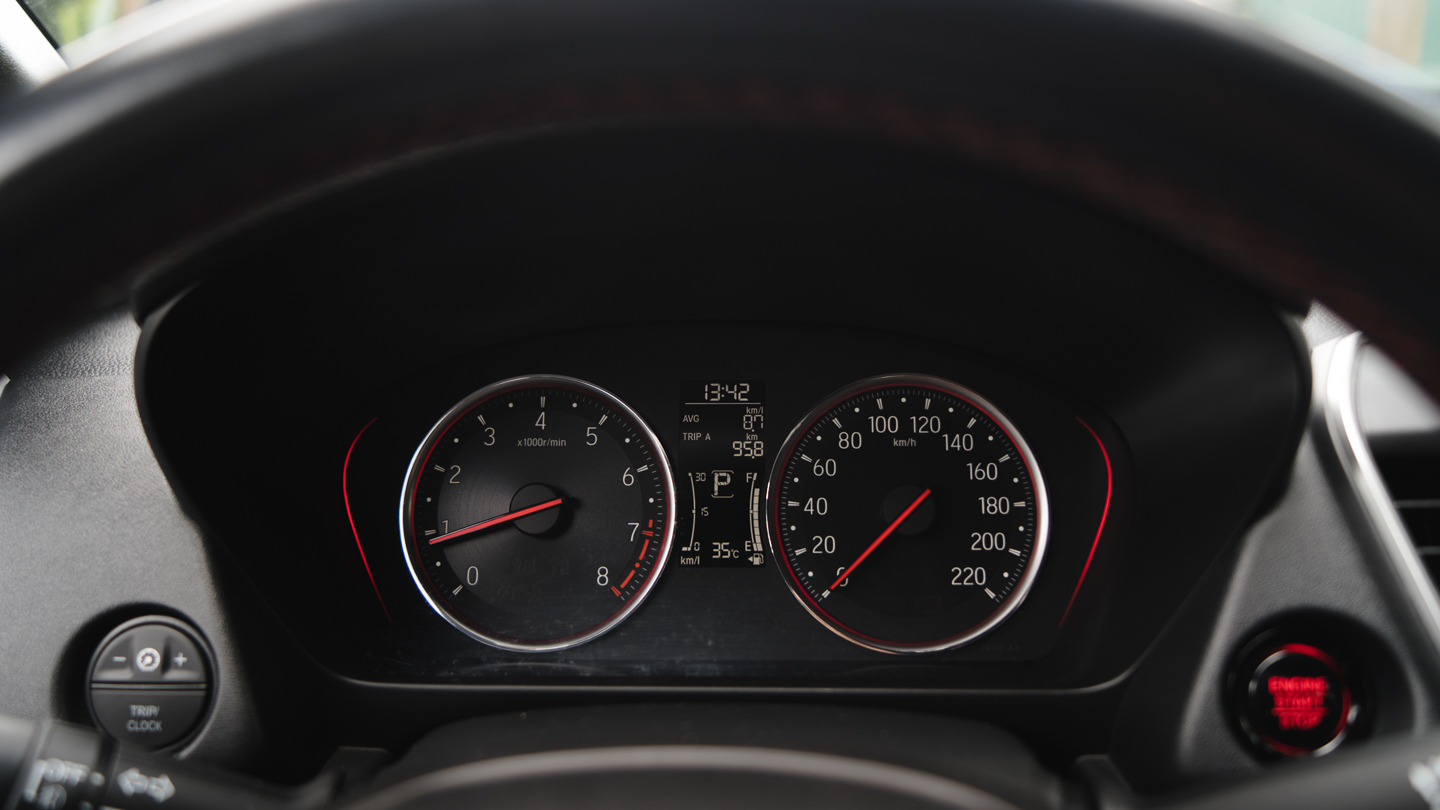 A new gauge cluster has also been fitted into the City RS. It has a small multi-information display that’s very minimalist in that it just displays your trip meter, your fuel economy, and the estimated range left. Being a City RS, I was expecting a bit more, but at least the dials look good and are very much legible. Good save there, in my opinion. 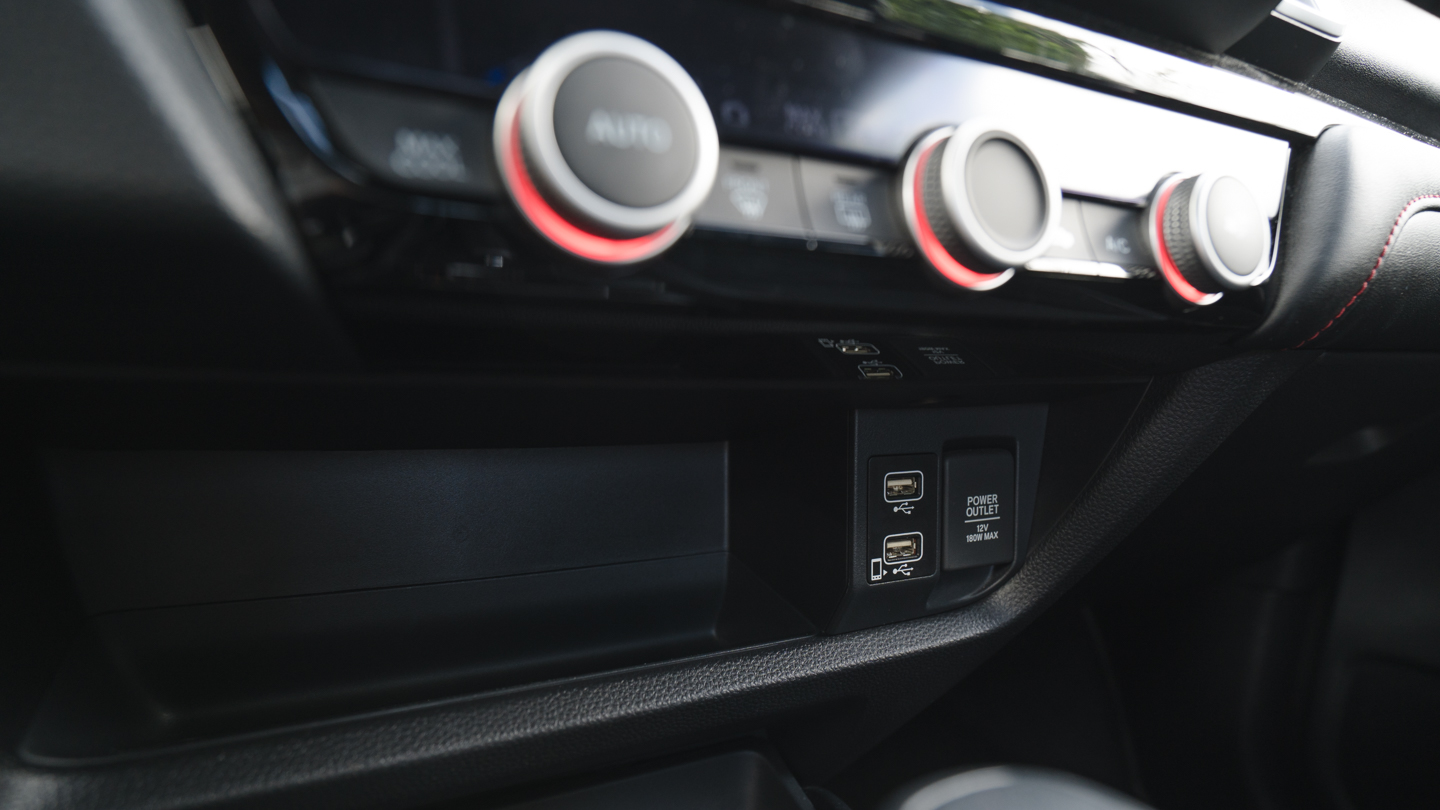 There’s also an abundance of spaces and cubby holes that you can stow your things into. There’s a bi-level “shelf” right under the A/C controls that are now tactile dials, by the way, plus a slim but deep dual cupholder further down the center stack. There’s a shallow recess under the handbrake lever, too, which you can use for smaller stuff like RFID cards. 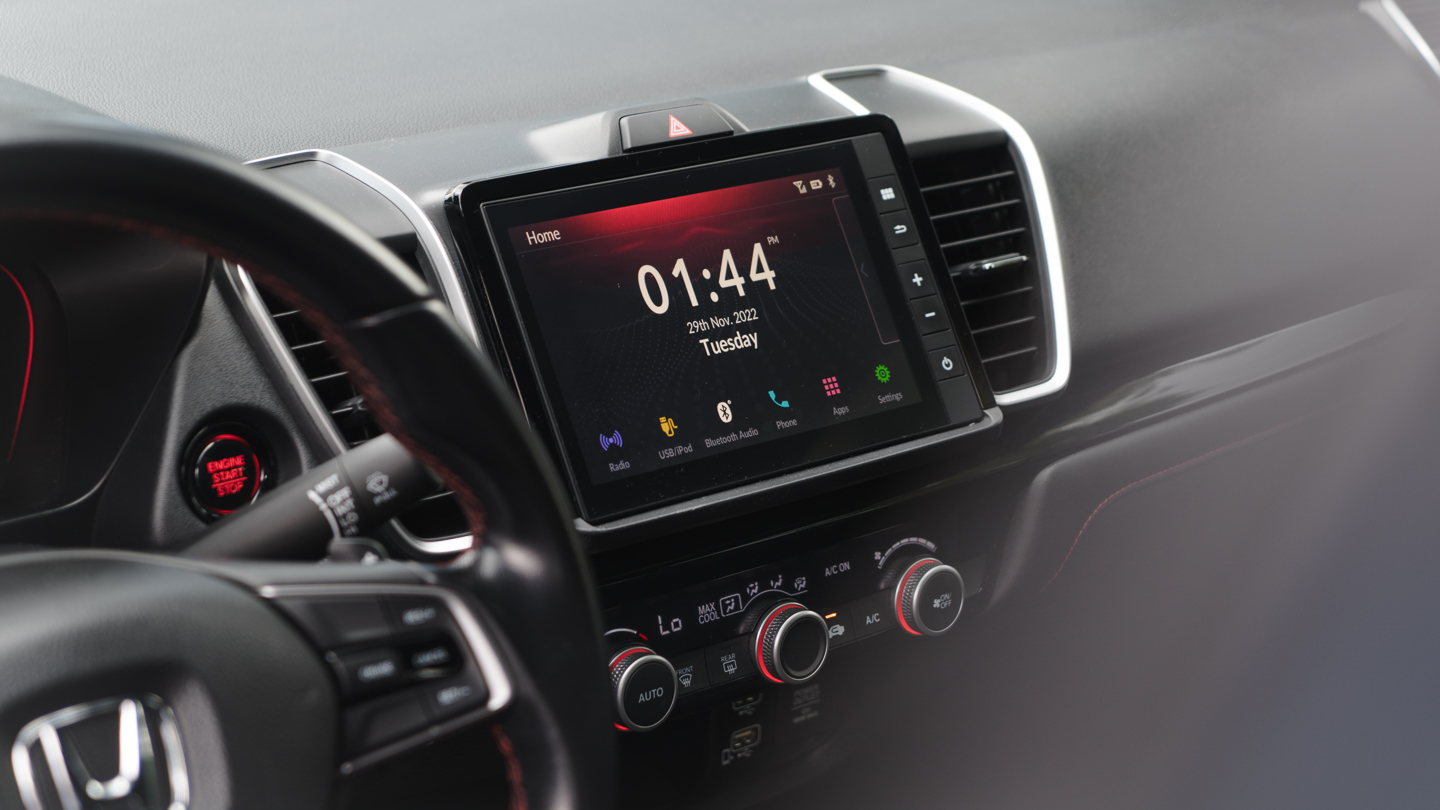 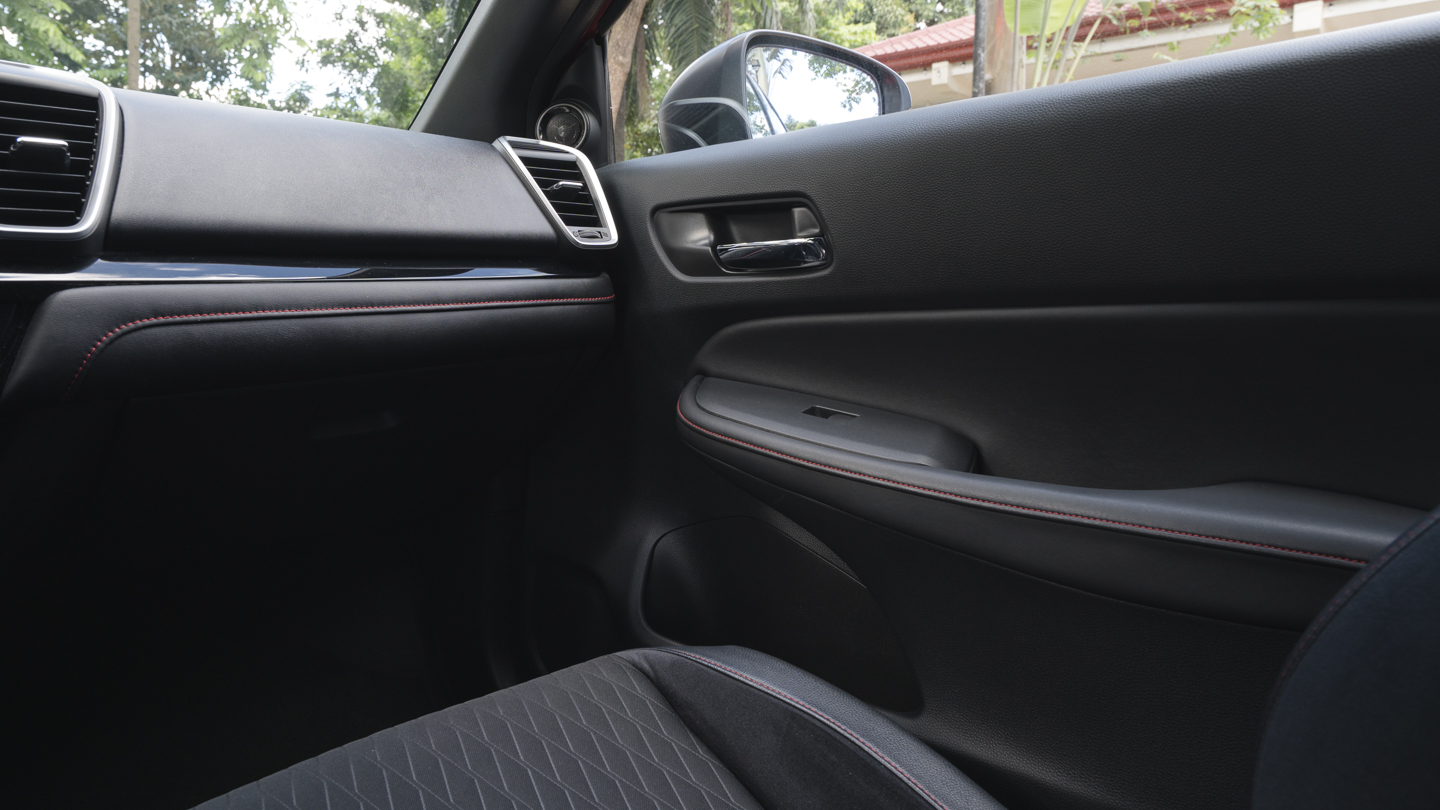 The cabin is mostly black with a few pieces of leather spread out from the steering wheel, the shifter boot, door sidings, and seat bolsters. Otherwise, it’s all a plasticky affair. This is one thing about the City RS that confused me. Again, “RS”, “top-spec”, but there’s just so much plastic and barely (if any at all) any soft touch points on the dash and door cards. Sure, the piano black accent pieces are classy and the red accent stitch sporty, but you’ll see, feel, and know that something is missing with the scarcity of hide in this model. Cost consideration, perhaps? Let’s look into that later. 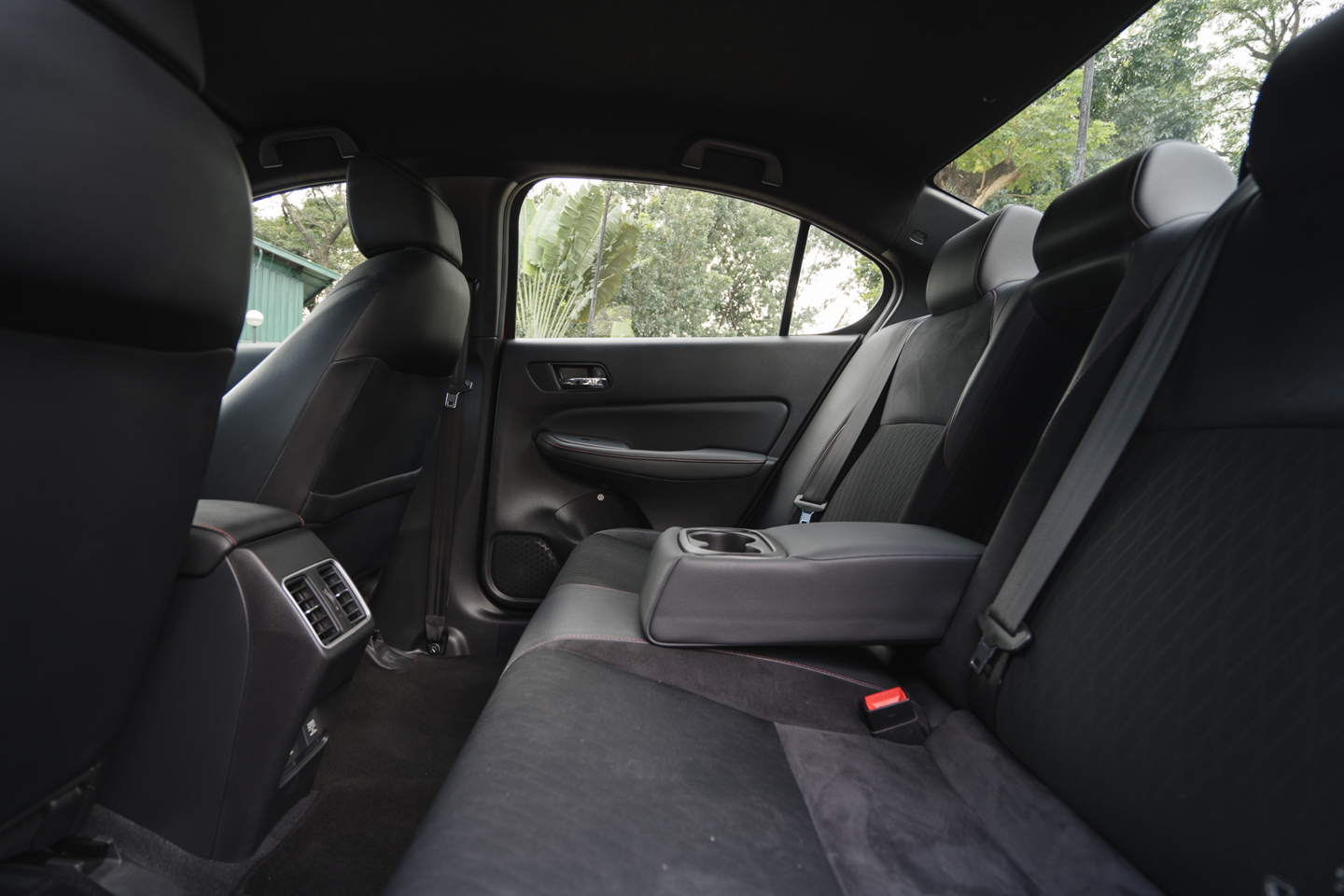 Another thing that is noticeably different, particularly with its hatchback brethren is the absence of the ULTR system. In a nutshell, it’s interior/cabin flexibility by way of folding and tumbling seats and seatbacks, and the sedan doesn’t have it. Granted, it’ll be hard to “adapt” it into the 4-door City RS, but it’s one point of compromise that a lot will look into when choosing between this and the hatchback. Not a dealbreaker, but something similar apart from just a 60:40 folding rear seatback would’ve been nice. No, the City RS doesn’t have folding rear seatbacks either.

Don’t get me wrong, the City RS (and its older sibling the Jazz) were always “crazy” when it comes to luggage space. This City still has the same impressive trunk space, and we can’t find anything to fault there. A good amount of groceries and luggage will still fit, so yes, despite not having the ULTR, the City RS can handle its own, and your cargo as well. 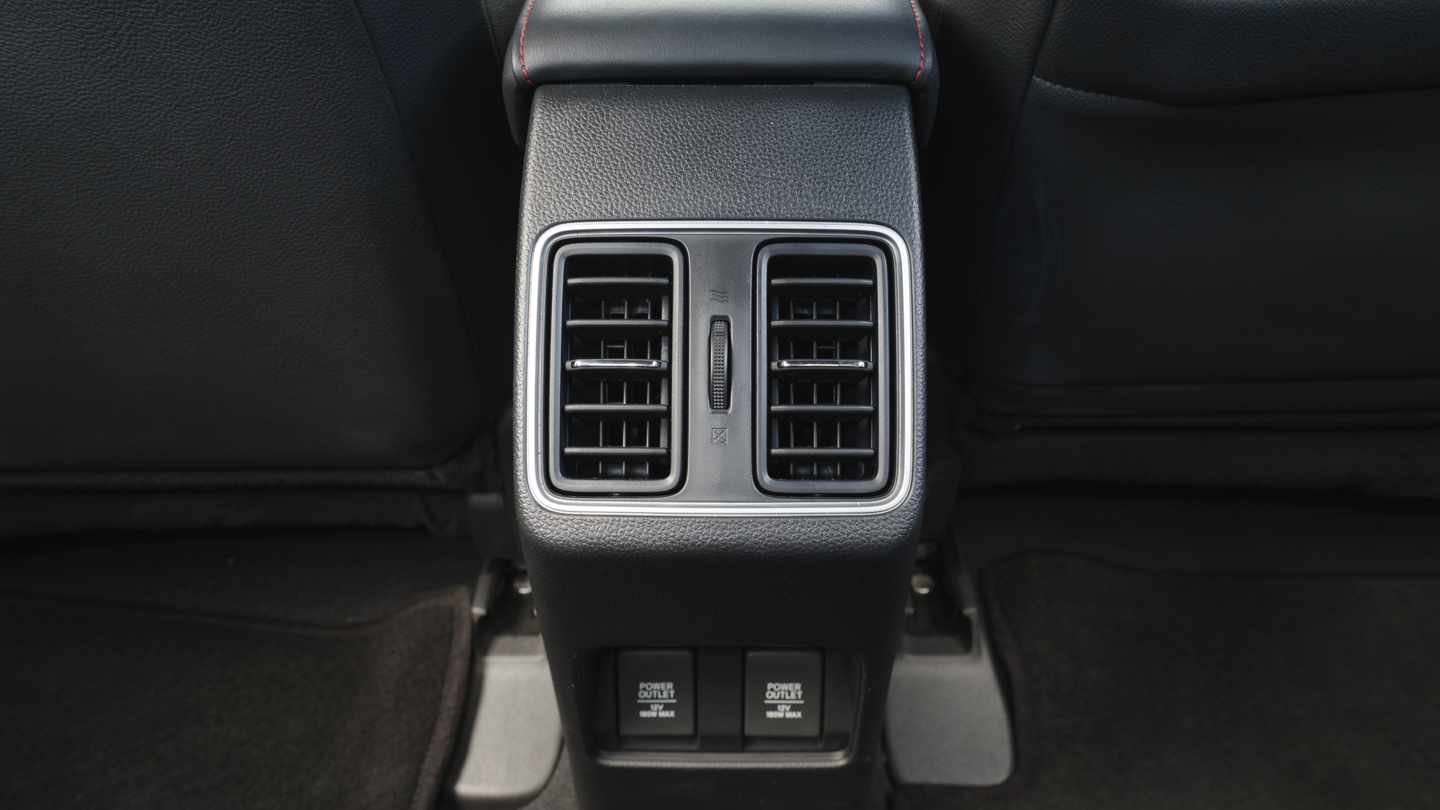 If we were to talk about cabin comfort, this City RS is top-notch. Overall headroom, legroom, and shoulder room are good in front and at the back, but if there’s something to nitpick about, it’s the tub on the front floor. What’s usually a flat sheet for your feet to rest on has a bulging border under the seats, and depending on how far you set your seat, you can find that it can hit the back of your shoes. We can surmise that this has something to do with Honda’s platform, but while it’s not a bad thing, it’s certainly noticeable. Again, we’re just nitpicking about it. 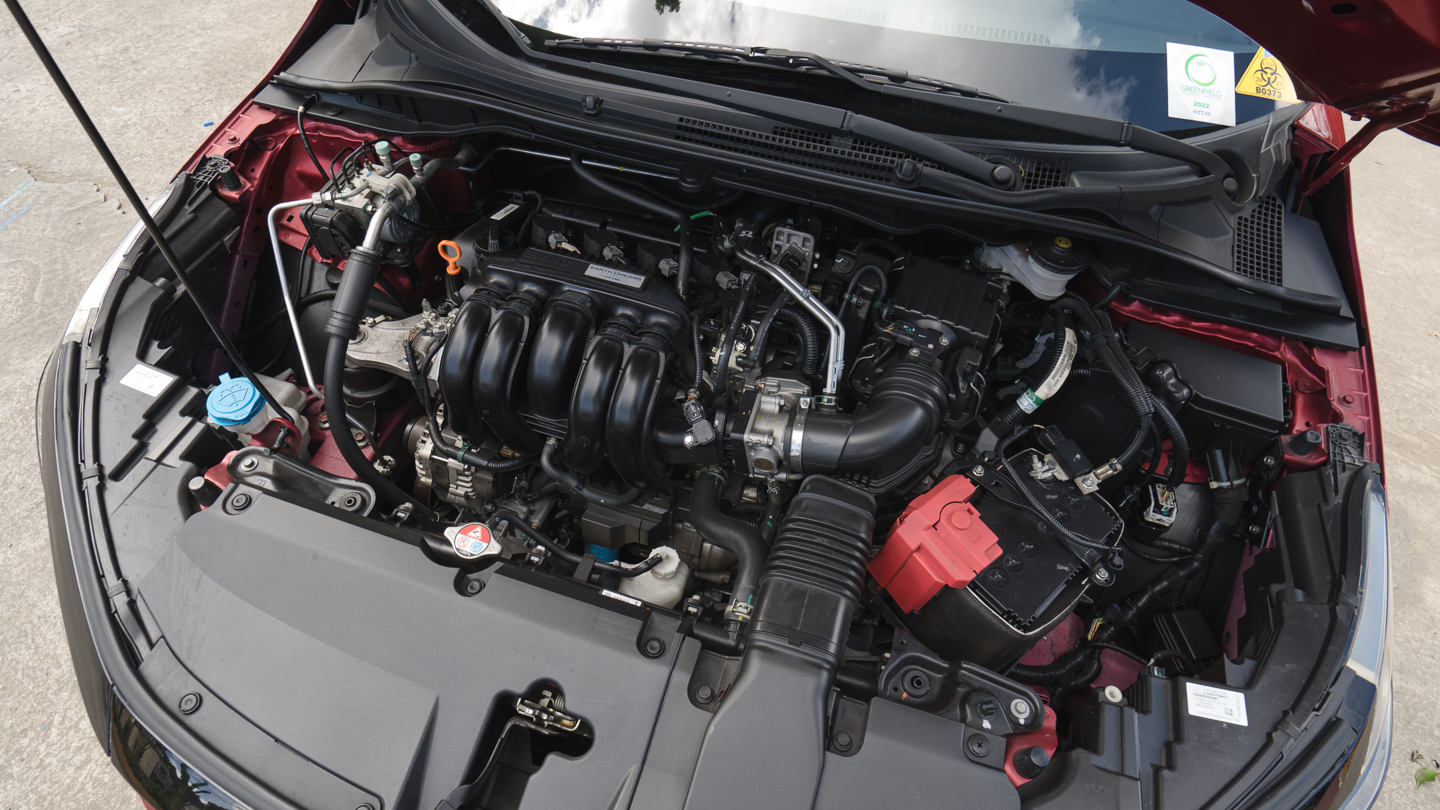 Moving on to the City RS’ performance, it’s powered by a 1.5-liter i-VTEC engine that’s paired with a 7-“speed” CVT. The torque is similar to that of the previous model at 145 Nm, but it did get the slightest of power bumps with 1 more PS, a grand total of 121 PS. Perhaps the big difference here is that it’s now a DOHC engine, no longer a single-cam. That makes for better power delivery and a better economy. We’ll get to that shortly. 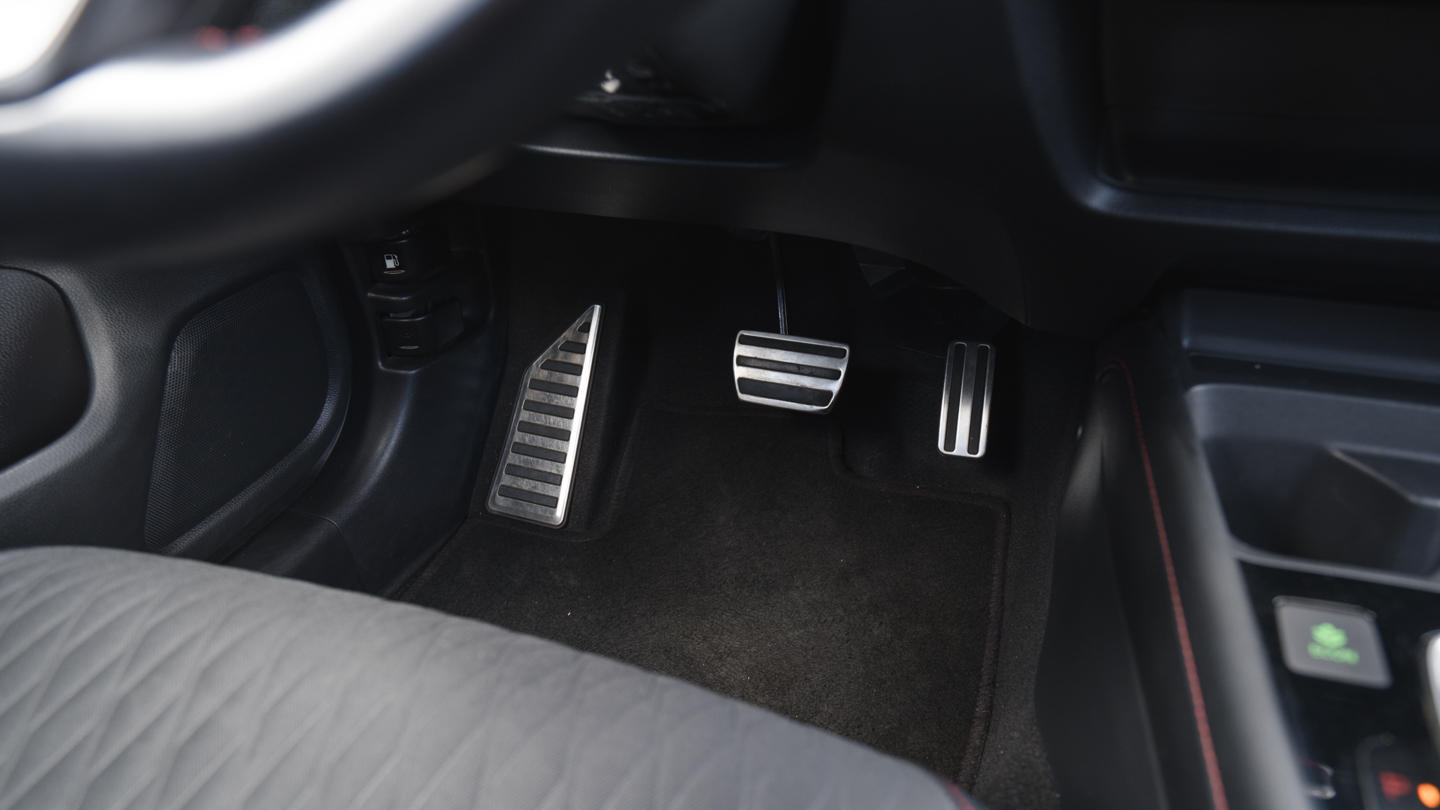 In Drive, you’ll notice a bit of a lurch and an audible, “labored” grunt when you step on the gas. It’s not meant to be quick, but the City RS can still go fast. If that’s what you want to do, just pop the shifter into S (Sport) and you get yourself a better power curve. With paddle shifters standard on the City RS, you can shift up and down faster, and that makes for a fun, spirited burst.

Earlier we mentioned that visually, the City RS looks to have a rather short wheelbase. Looks can be deceiving. This model is actually longer by 20mm, and we can attribute this shorter look to its longer bumpers at both the front and rear. That’s where we think it gets its comfortable ride from. It’s a bit on the harder side as far as the suspension goes, but really, it’s not jarring at all, nor is it a wallowy ride.

Overall the ride feels planted, stable. We can do with a little bit more feedback from the steering wheel, but it’s negligible. Don’t expect the City RS to carve corners, but it can certainly do so (if needed) without you having to worry about rolling over like Michelangelo in a pizza coma. 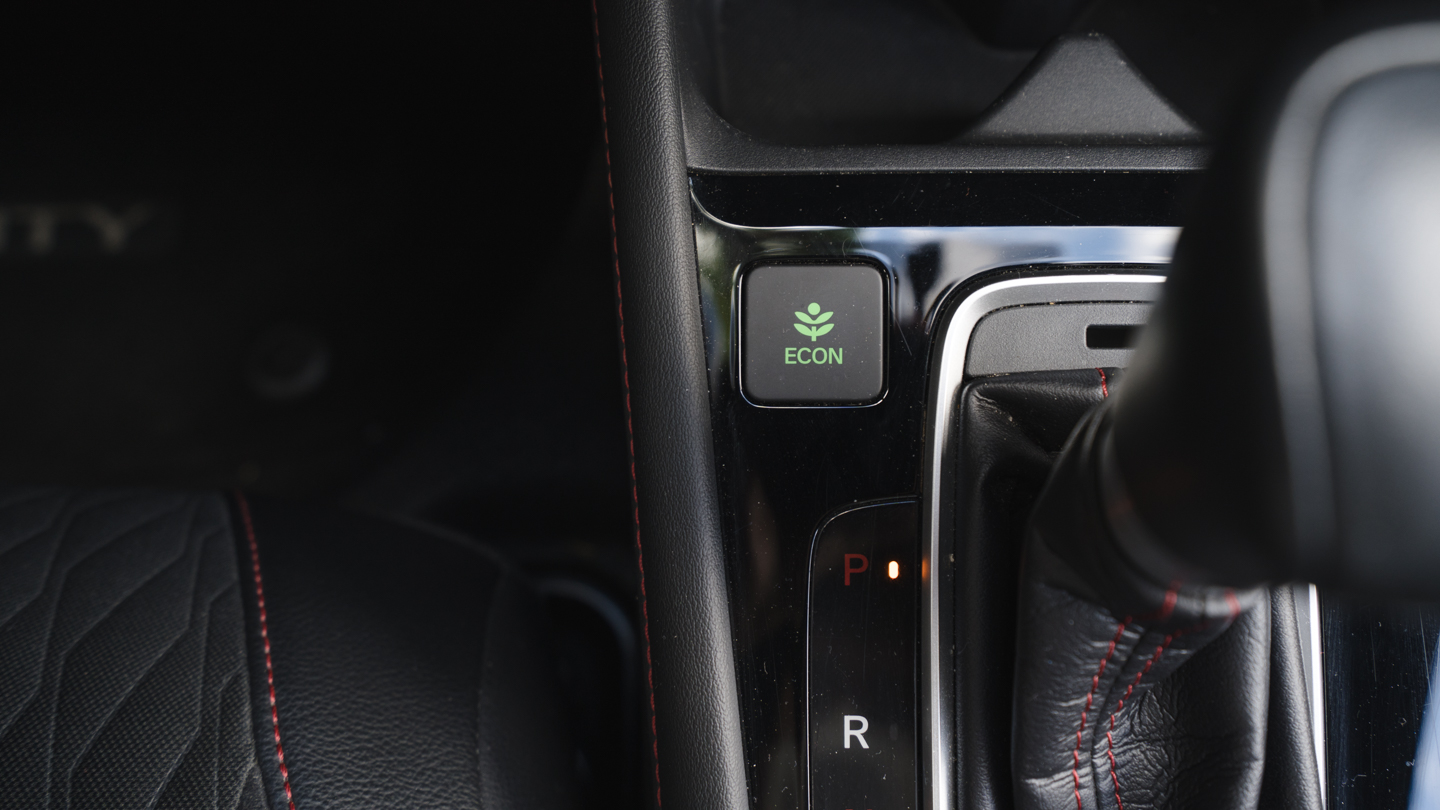 Now, on to fuel economy. I think this is where the City RS really shines. Living in Commonwealth, I’m subjected to the daily rigors of bumper-to-bumper traffic. Despite that, I’m still able to manage 9.5 kilometers per liter. With enough time and open stretches – both city and the highway – we can do 13.4 kilometers per liter easily. Long drives will be a cinch for the City RS, and our only regret is that we weren’t able to really test that. Perhaps on our next outing with this car, we will.

So thus far we’ve written about the things we noticed and liked. But now let’s get to those that we feel need improving upon. First, the rear camera module. Much like my review of the Honda HR-V S, it’s not the fault of the infotainment display that it shows you an immensely grainy video quality when popping into reverse. Honda Cars Philippines, we really need to change this, please?

Another and more important thing that we would like to be improved are the brakes. Not so much the brake assembly, but that of the brake pedal and its feel. See, the travel of the brake pedal is pretty deep. Once it bites, it bites, but there’s a noticeable delay before it does. The brakes are not linear in that the City RS does not slow down as gradually as you step on the brakes. Whether this is a fluke or just with this test unit, this is my biggest point of concern, and I hope it really is just an isolated case. 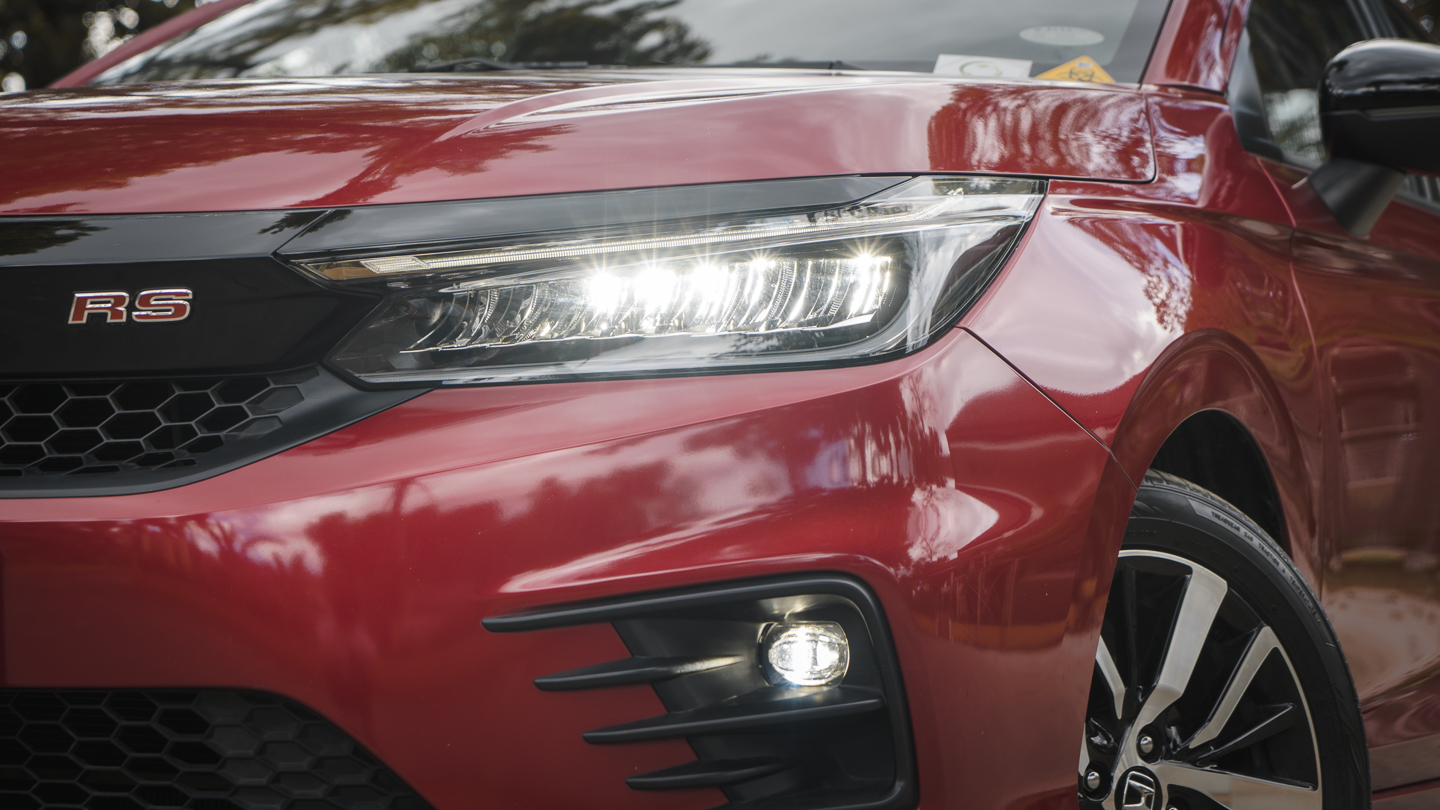 So with all these said, does the Honda City RS really live up to being the top-spec variant, or is it a compromise should you decide to give up the coin for it? At PHP 1,078,000, it is vastly different from the past City models, and it does have its lacks and points for improvement. However, it does give you a new and great-looking package with more modern amenities and features. My answer, then, is that this Honda City RS shouldn’t be compared to what we used to have.

Being all-new means it should make a statement for itself without having to bump heads with the older models.”It’s a Honda”, and a lot of people are familiar with this saying. As is expected of any Honda vehicle, the City RS can hold its own, not just “against” its predecessor, but more importantly, with its rivals in the market. Yes, it does bear the RS badge, and for what it offers alongside the rest of the Honda PH lineup, it’s definitely good for it.