Honda has really been building the hype for the CR-V. From its teaser images first shown in May to a quick look at its dashboard at the end of June, bits and pieces of their all-new crossover were seen, but none showed it in its full glory. But now we can finally see it, look at it, and man, does it look good. When it was first announced, the 2023 CR-V was touted to be sophisticated, rugged, and more advanced. By the looks of it, we think Honda wasn’t playing around. Aside from getting a radically redesigned front end, it’s become longer and wider, too. Add to the fact that there will be four variants and the top-end choices getting hybrid power, and everyone’s wait should be worth it.

Let’s have a look at the exterior first. The photos you see here are from the Sport and Sport Touring variants. Top-of-the-line, yo. Yes, it has grown in proportions, and it’s now 68mm longer and 10mm wider. The wheelbase of the all-new V has likewise been lengthened by a little more than 40mm. That translates to its more rugged looks, its wider stance, and better driving dynamics compared to before. We’ve yet to see the two lower variants, but the showcase here is for the Sport and Sport Touring models.

These two top-tier variants get high-gloss black accent pieces replacing the bling of chrome on the grill. They also get a different set of 18″ or 19″ alloy wheels in either five- or ten-spoke designs. At the rear, you’ll find the familiar vertical taillight units, a spoiler, plus sporty tailpipe frames (finishers, maybe?) on either side of the rear bumper.

It gets better inside. 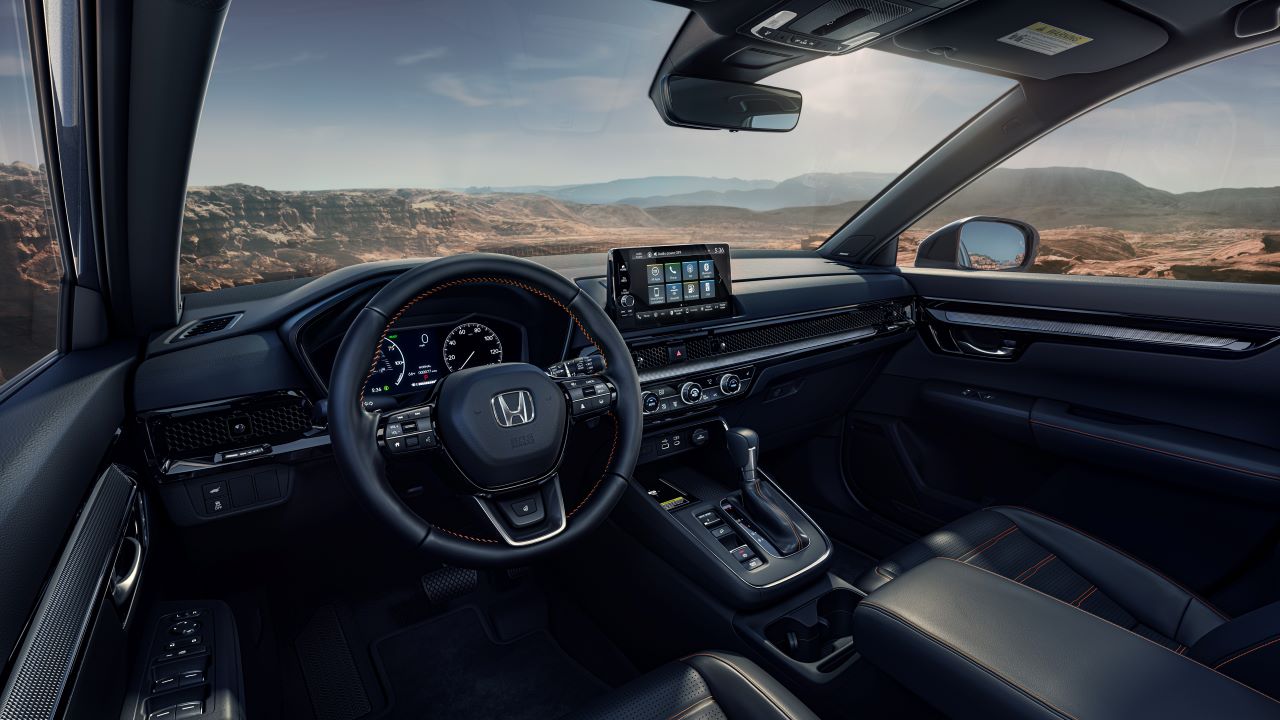 We’ve already published an item about the upcoming CR-V’s dashboard. Yes, it looks familiar because it is effectively the same one they’ve slapped onto all vehicles in this generation. The HR-V, Civic, and CR-V all share a common dashboard, but still, have differences that set them apart from each other.

In this crossover’s case, the center stack going down to the shifter console was designed differently. It loses the cupholder that the Civic gets, but there are other places to stow your drinks in, for sure. That and the drive mode and brake toggles are found on the left nearer the driver while the shifter lever is placed on the right. Similar, yes. Same, no, not really. The CR-V’s high-end variants get black leather with orange contrast stitching as the upholstery of choice. Blacked-out door cards and what looks to be a dark gray headliner were put in for good measure, and a touch of class to go with the splash of the sportiness of the exterior.

Inside you’ll also find a fully digital gauge cluster to show you all you need to know about the V. Depending on the variant that buyers choose, the infotainment will either come as a 9- or 11-inch touchscreen that comes with Android Auto, Apple CarPlay, and 12 speakers care of Bose that pump the sound out.

One thing worth taking note of is that this generation of the CR-V will supposedly have over 1,000 liters of cargo space. Or so Honda declared. It’s supposed to be the most versatile among its previous iterations when it comes to cargo handling, so we won’t be surprised if it can take on any of the ULTR (Utility, Long, Tall, Refresh) configurations. That idea might be a long shot, but hey, one can dream. There will be two different engines to choose from with the all-new CR-V. First is a traditional petrol engine. This 1.5-liter turbocharged gasoline engine puts out 109 HP and 243 Nm of torque. The biggest change to the V comes with its second engine option. With the hybrid setup, you get a 2.0-liter Atkinson-cycle 4-cylinder engine with a pair of electric motors. The output? 204 HP and a significantly larger 335 Nm torque figure. Both engines are mated to a continuously variable transmission (CVT).

After its USA summer debut, we can’t help but think about when we will get the 2023 CR-V here in the PH. And if we do, will the same four variants come in, and will the hybrids be priced competitively enough to go against the competition.

Honda is looking at going green and environment-friendly in the next few years, so if they want to make the CR-V a gateway into their more sustainable plans, then we’d be more than happy to partake of that plan. This, of course, is if Honda Cars Philippines packages the PHDM spec V properly enough.

Who’s excited? We definitely are.

Special plate for your brand new vehicle? Yes, you can get that… at a price