In light of the Holy Week, the MMDA has suspended the vehicle Coding scheme starting tomorrow, April 12 until Friday, April 15. For four days, vehicles plying routes within Metro Manila may freely travel between cities without having to worry about being apprehended for “Coding”. 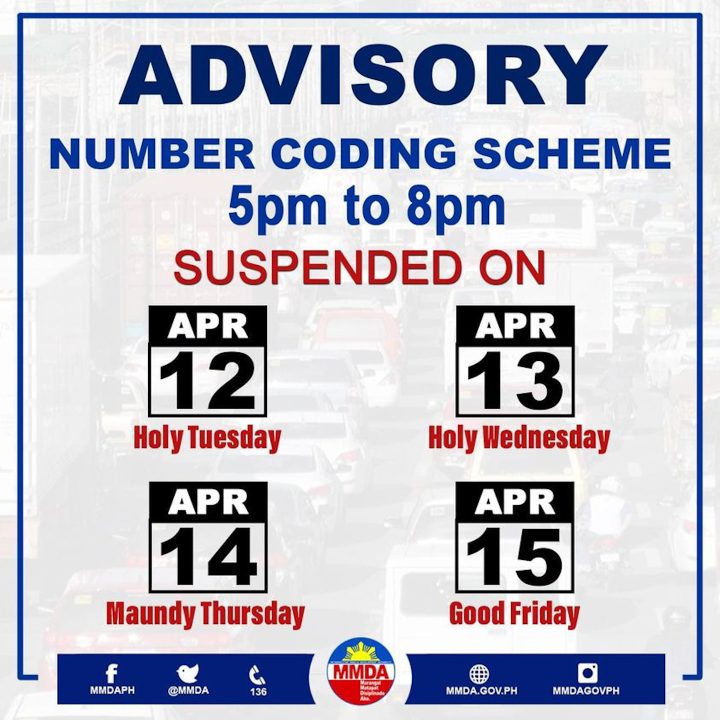 Concurrently, a massive influx of vehicles is being anticipated by Metro Pacific Tollways Corporation (MPTC) during this entire week. “As we return to some normalcy as compared to recent years, we have anticipated this increase in volume by fielding additional personnel and offering special roadside services,” said MPTC President and Chief Executive Officer Rodrigo E. Franco.

To ensure safety, the MPTC also added that they will be implementing their “Safe Trip Mo Sagot Ko” program on NLEX, CAVITEX, CALAX, CAVITEX C5 Link, and Subic-Clark-Tarlac Expressway (SCTEX) from April 8 to 18.

“Included in this program are the increased deployment of patrol crews, traffic marshals, security teams, and toll plaza personnel to ensure safety, and provide immediate assistance to motorists,” the company said. “As in the past, emergency medical services and incident response teams will also be augmented and will be stationed at strategic areas of the expressways,” it further added.

Lastly, the suspension for coding currently only encompasses cities that don’t have their own number coding scheme, such as Makati. Makati City has yet to announce if they will follow the MMDA announcement or have their own scheme.

Do plan your trips ahead, everyone. And drive safely out there.