I was not a fan of the previous Nissan Almera, at the time it was for me quite an odd-looking vehicle. Also, the interior and other aspects of it were less than inspiring. It seems I wasn’t alone too, the Almera (as far as I could tell) wasn’t as popular as its chief rivals; the Toyota Vios and Honda City.

The good thing is the Nissan Almera had been due for a much-needed update and even better was the fact that Nissan put their heads together to come out with a better product.

Enter the 2022 Nissan Almera VL Turbo N-Sport, can it finally step out of the shadows cast by its rivals? 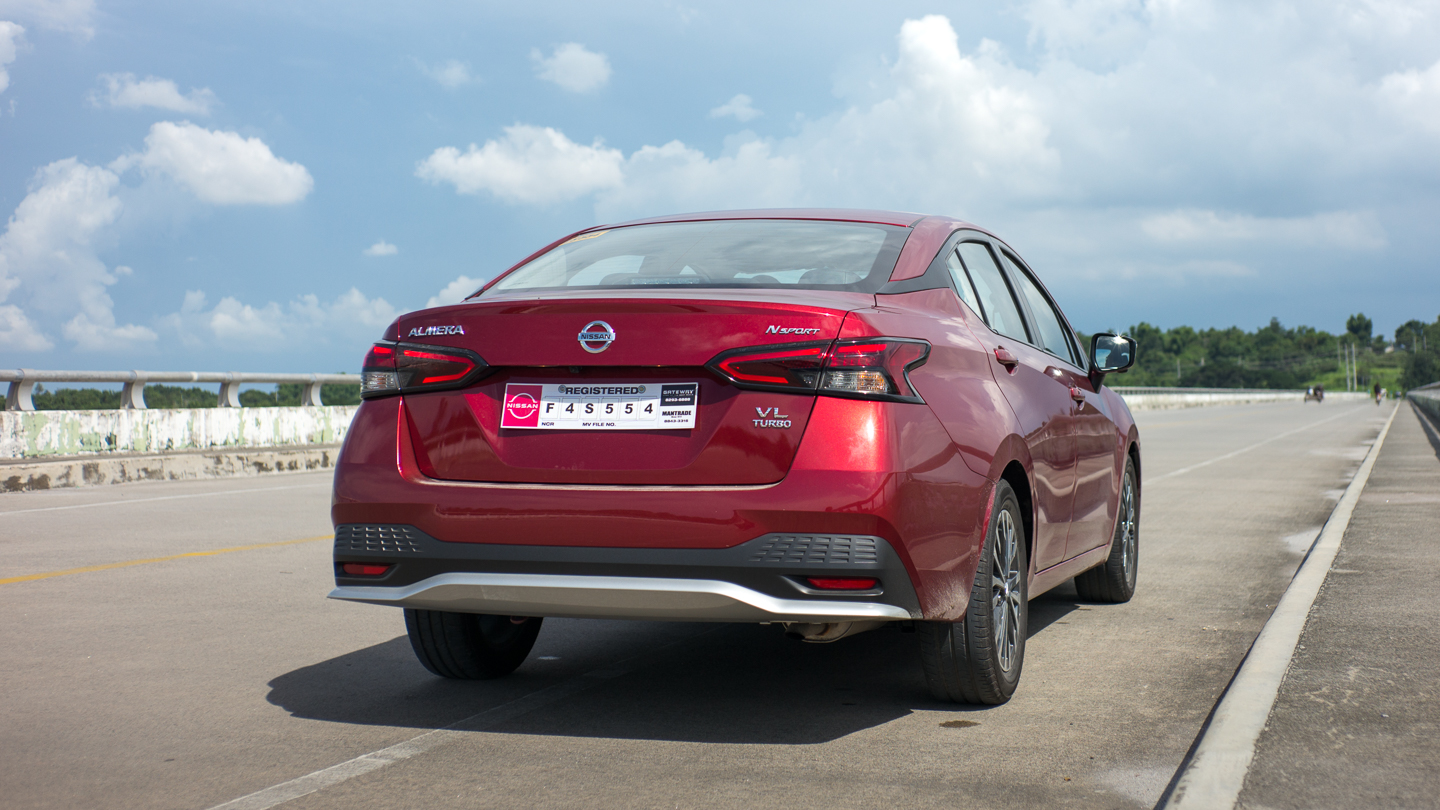 Let’s start with its looks, and right off the bat, I’m glad to report that it looks nothing like the previous generation. Gone is the odd rounded design motif that made the old Almera look almost alien-like. The new Nissan Almera now features a more wedge-type design with sharper and more modern angles. The new face incorporates the “V-motion” grille with LED headlights, Daytime running lamps, and foglamps. Since the vehicle I had was the N-Sport variant, its front and rear bumpers get the sportier N-Sport treatment. In reality, the N-Sport pack gives it contrasting silver-colored panels such as the front bumper lip, rear bumper lip, and side mirrors. The Nissan Almera VL N-Sport also gets different 16-inch alloy wheels that round out the exterior further. 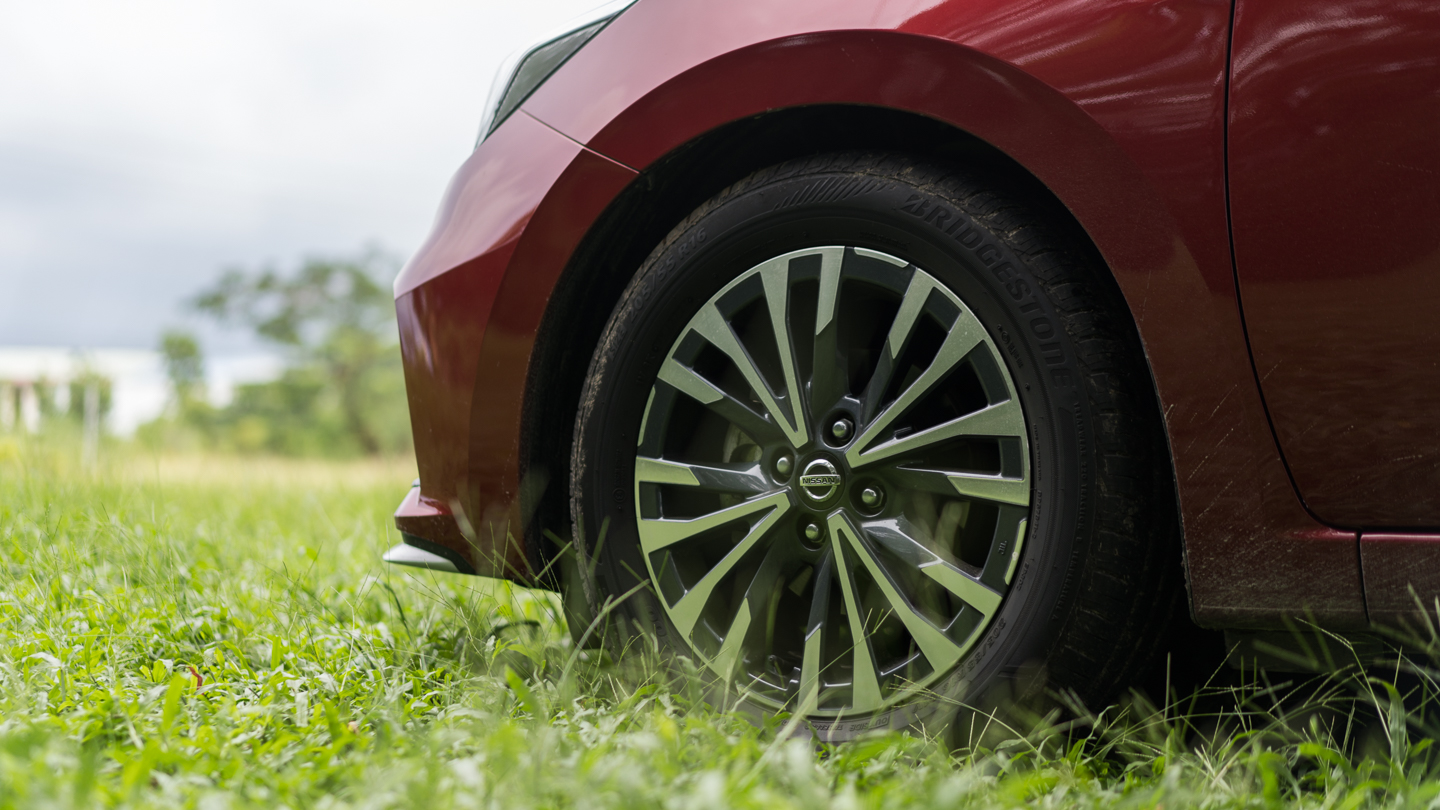 Lastly, I don’t usually like the color red on vehicles but in this case, the Cayenne Red of the Nissan Almera VL N-Sport made it stand out in the right way.

Based on the exterior update alone the Nissan Almera VL N-Sport is leaps and bounds better than ever. Sleek wouldn’t be the right word to describe it, Nissan has properly made the Almera look sporty without trying too hard. 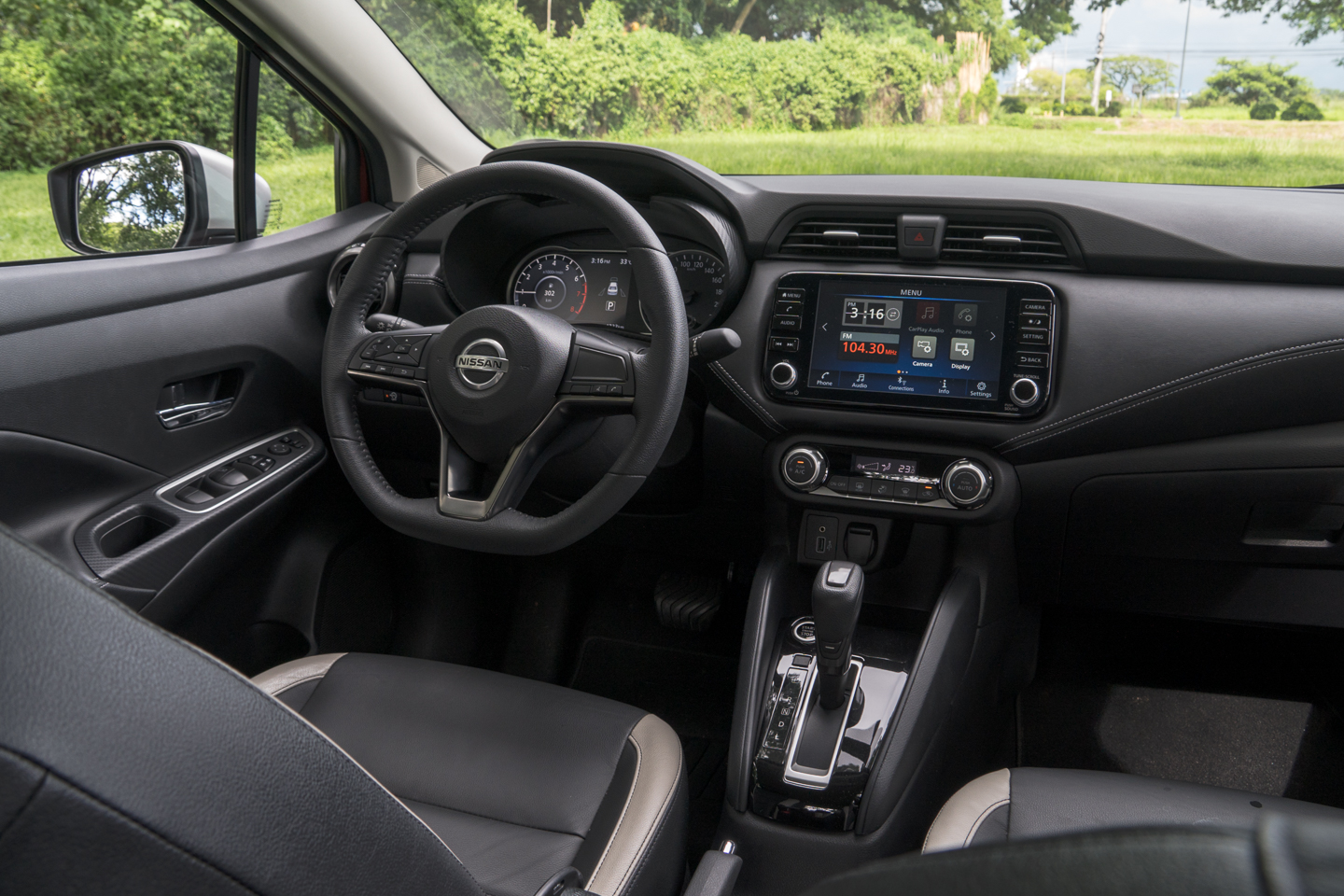 Nissan has always been good at making comfortable and premium interiors, the new Nissan Almera VL N-Sport is no exception. 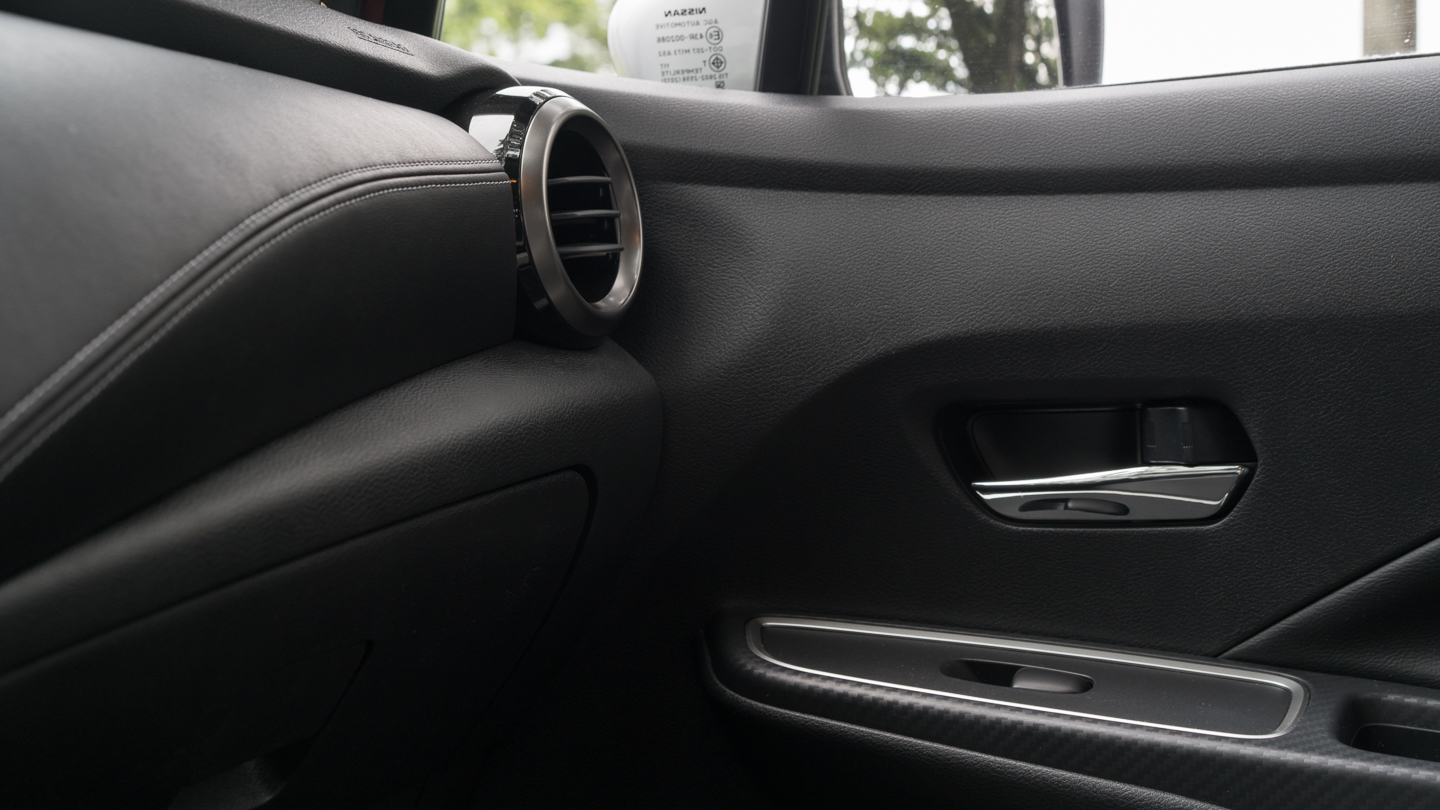 The interior is awash with nice soft-touch panels, while the seats and steering wheel are wrapped in supple premium leather. I also like the fact that the 8-inch touchscreen infotainment system looks like it was installed in the factory and not just some cheap-looking aftermarket unit slapped on locally. 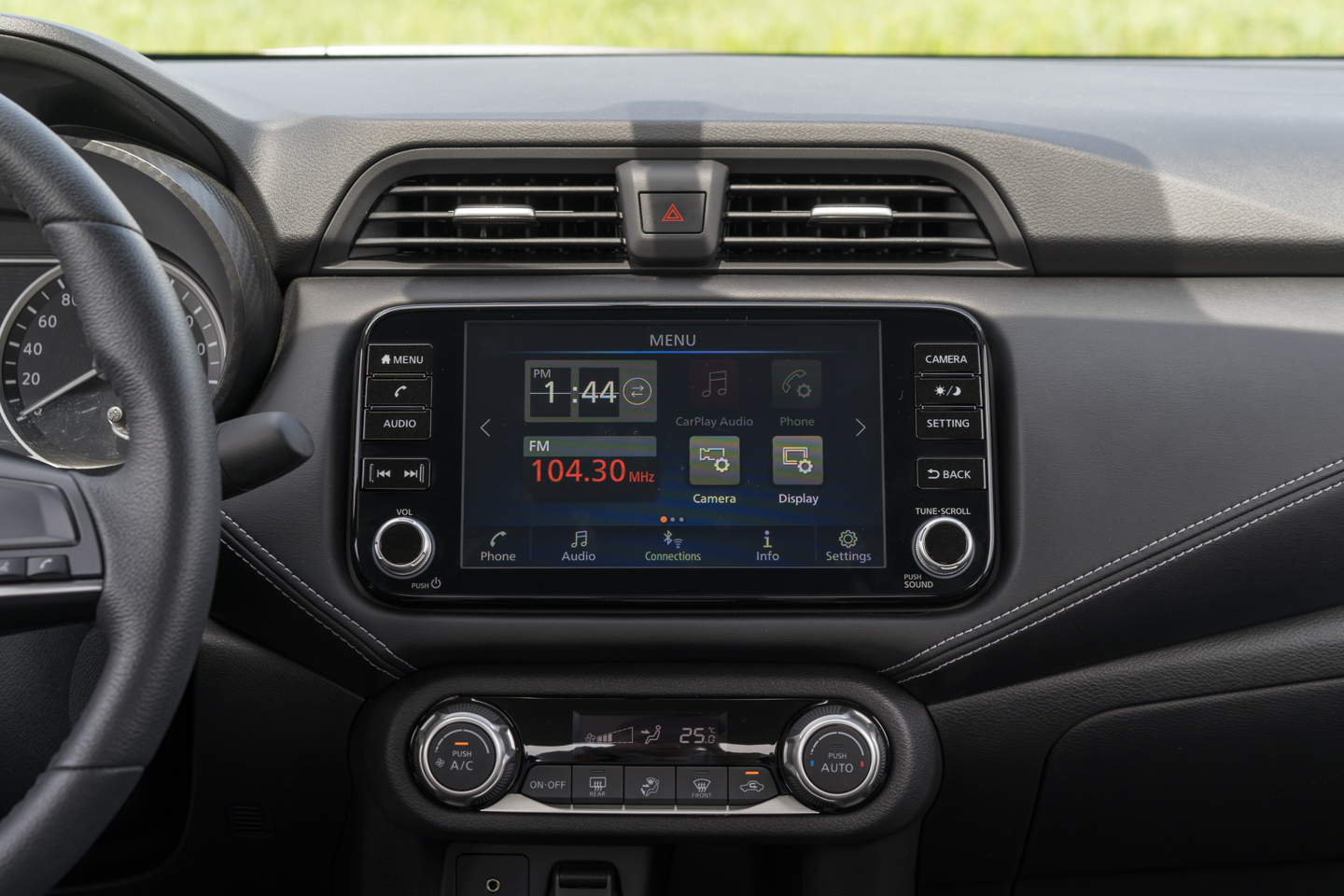 While it does have the standard connectivity options such as Bluetooth and USB, unfortunately, it only has Apple CarPlay and no Android Auto. Which I found to be quite a sore point because I use an Android-operated phone thus, I couldn’t use the screen for Waze and other apps. Hopefully, Nissan adds this feature soon. 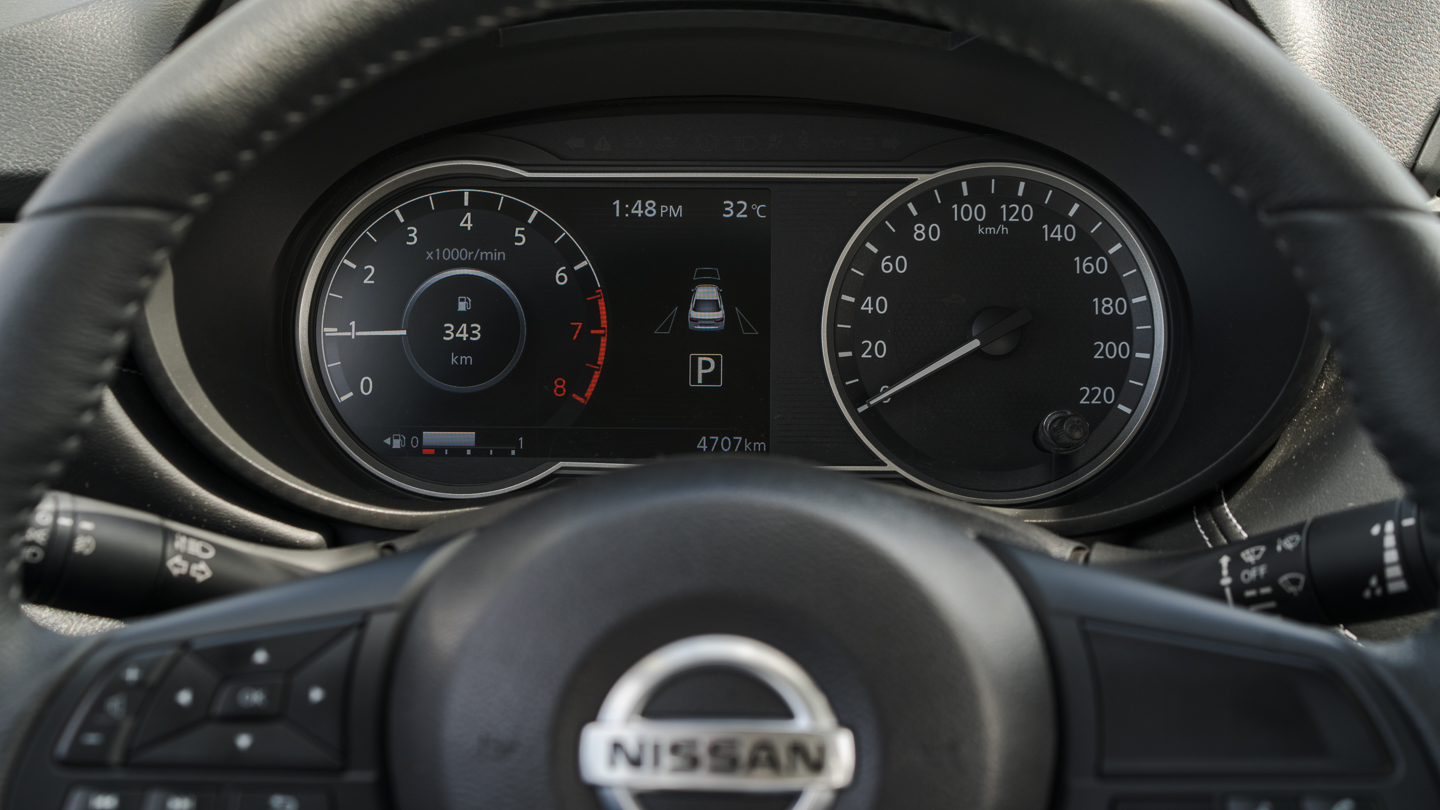 What I also liked was that the Almera has a split gauge cluster, by split I mean half is a 7-inch digital display and the other half is an analog gauge. The digital cluster is customizable to what vehicle information you want to be displayed in front of you. The information ranges from fuel economy and range, a tachometer, vehicle information, and media screen (radio station, songs, etc). The instrument cluster is a true plus point, as most of its competitors don’t have the feature even at top-level trims. 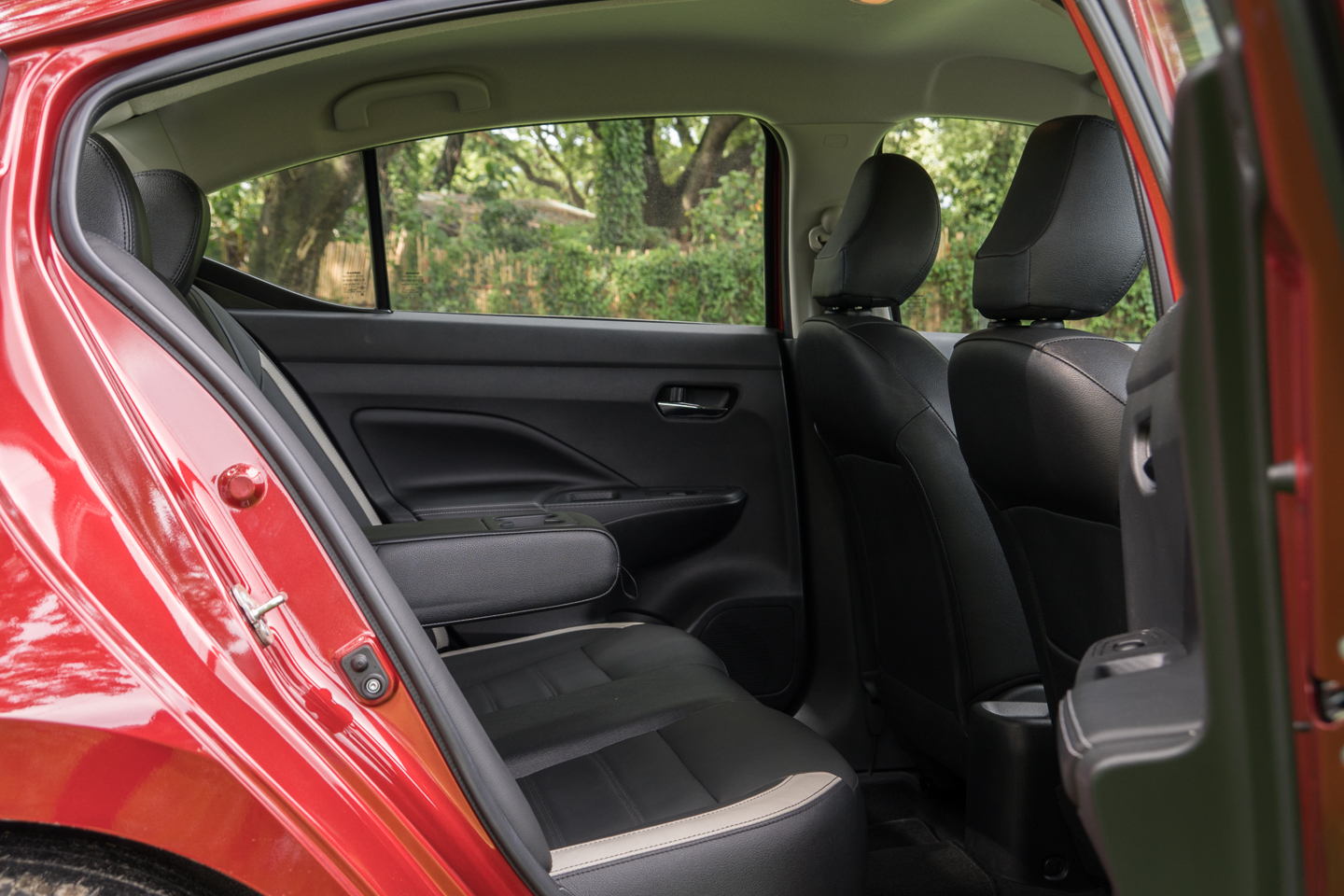 Lastly, the space in the interior is massive. The fact that the Nissan Almera is a sub-compact sedan, it truly felt bigger than that inside. Even the trunk space at one glance looks much bigger than what the others offer. Rather than try and compete with the other sup-compacts, Nissan decided to make the Almera a more fuel economy-driven vehicle. The engine is a 1.0-liter 3-cylinder turbocharged gasoline engine that pumps out a decent 100 PS and 152 Nm of torque. Power is then sent to the front wheels via the Xtronic CVT unit. 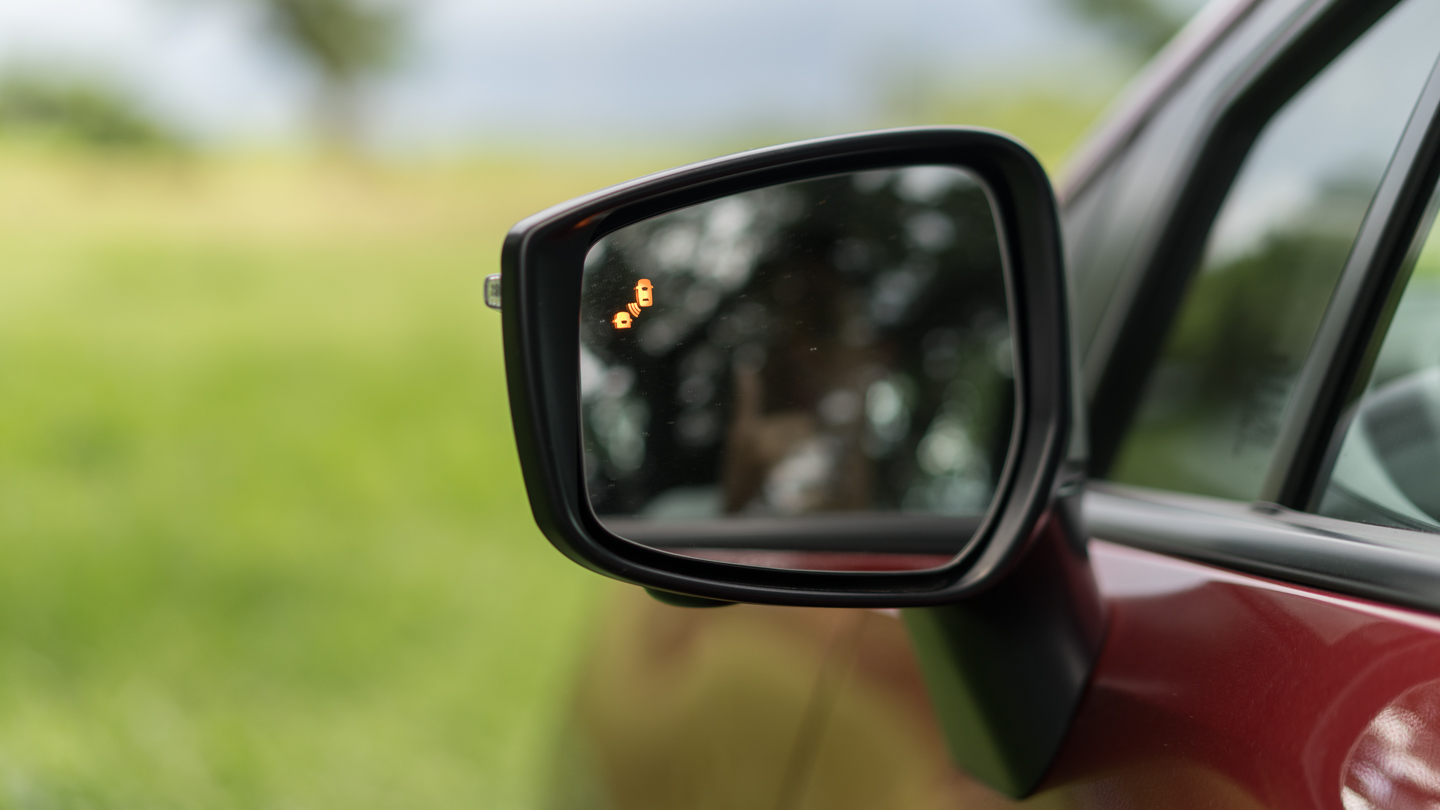 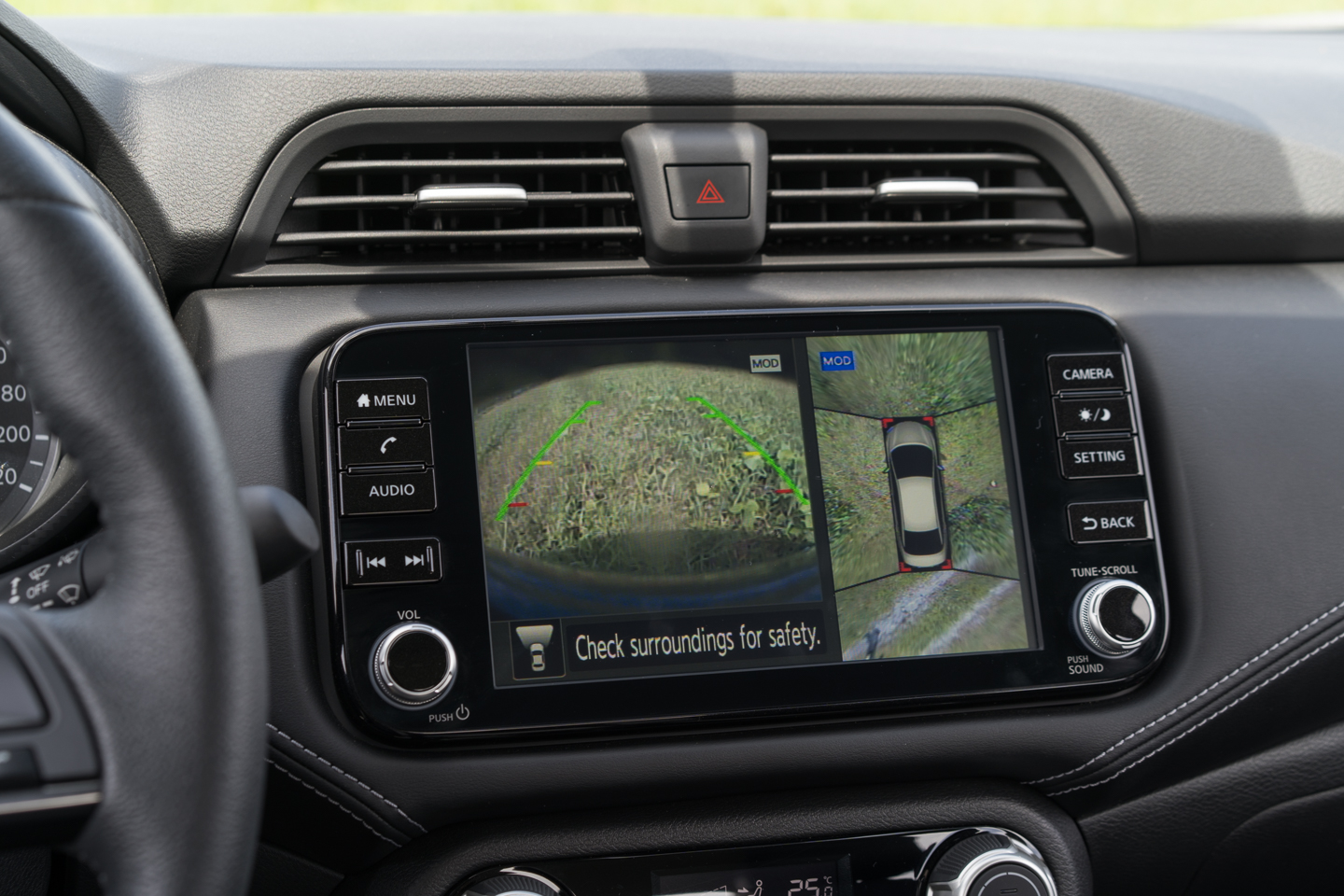 As if those weren’t enough, the Nissan Almera also has 6 airbags, antilock brakes, and electronic brake distribution.

Again, in terms of safety, the Almera has its closest competitors beat by a wide margin. 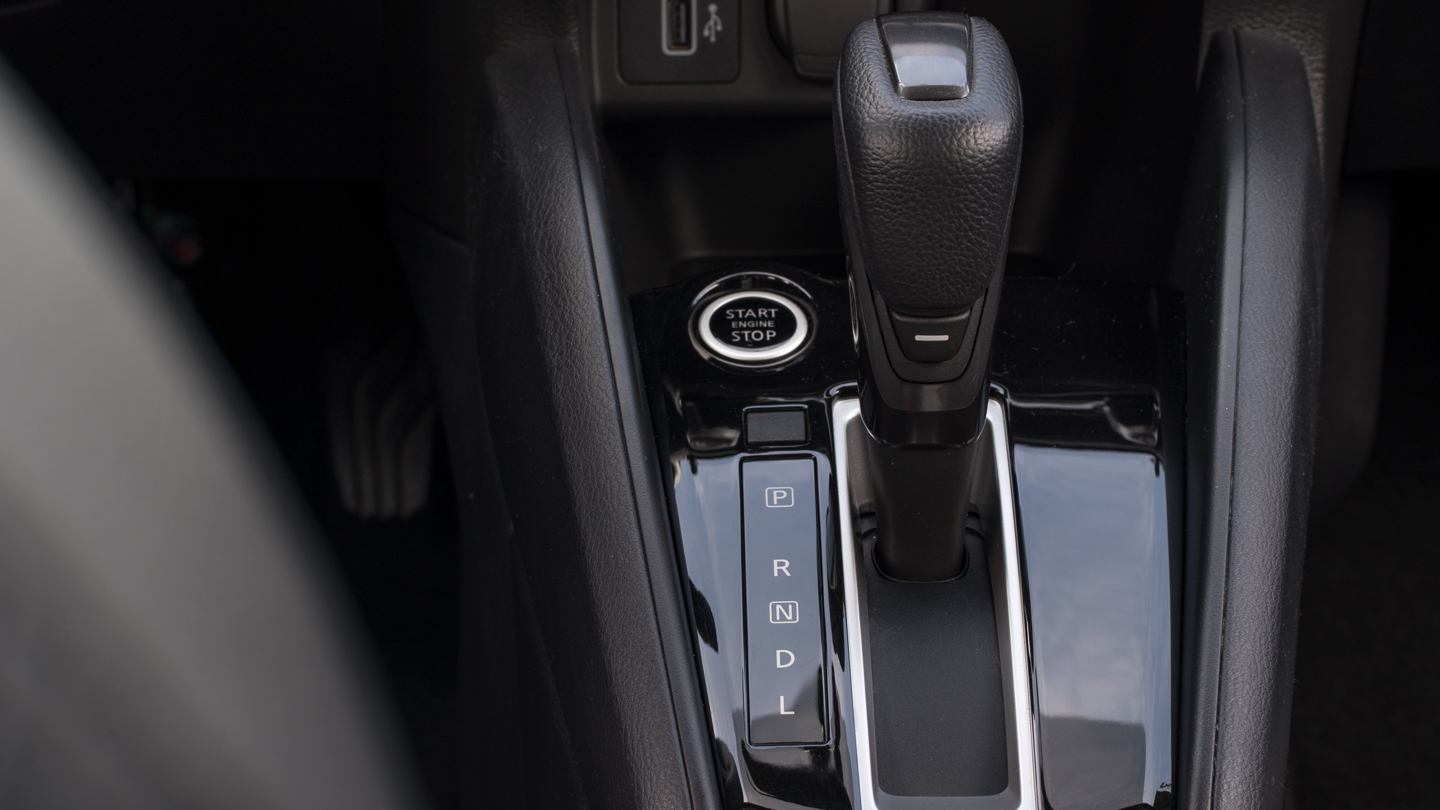 As mentioned earlier the Nissan Almera has been geared up with fuel efficiency in mind, so let’s start there. In the city alone, I was able to get 11.5 km/l and on the highway, I was able to go as high as 25 km/l. That is an astonishingly good number despite the fact that I was keeping up on the highway at a steady 100 kph.

Also, the seemingly paltry 100 Ps of power is actually more than enough. This is because the Nissan Almera is such a light car to drive, light in almost every aspect. It doesn’t struggle from a standstill and acceleration is more than decent, I didn’t even have to use the “sport” button. The steering also manages to be light and direct at the same time allowing me to drive with confidence both at high and low speeds. 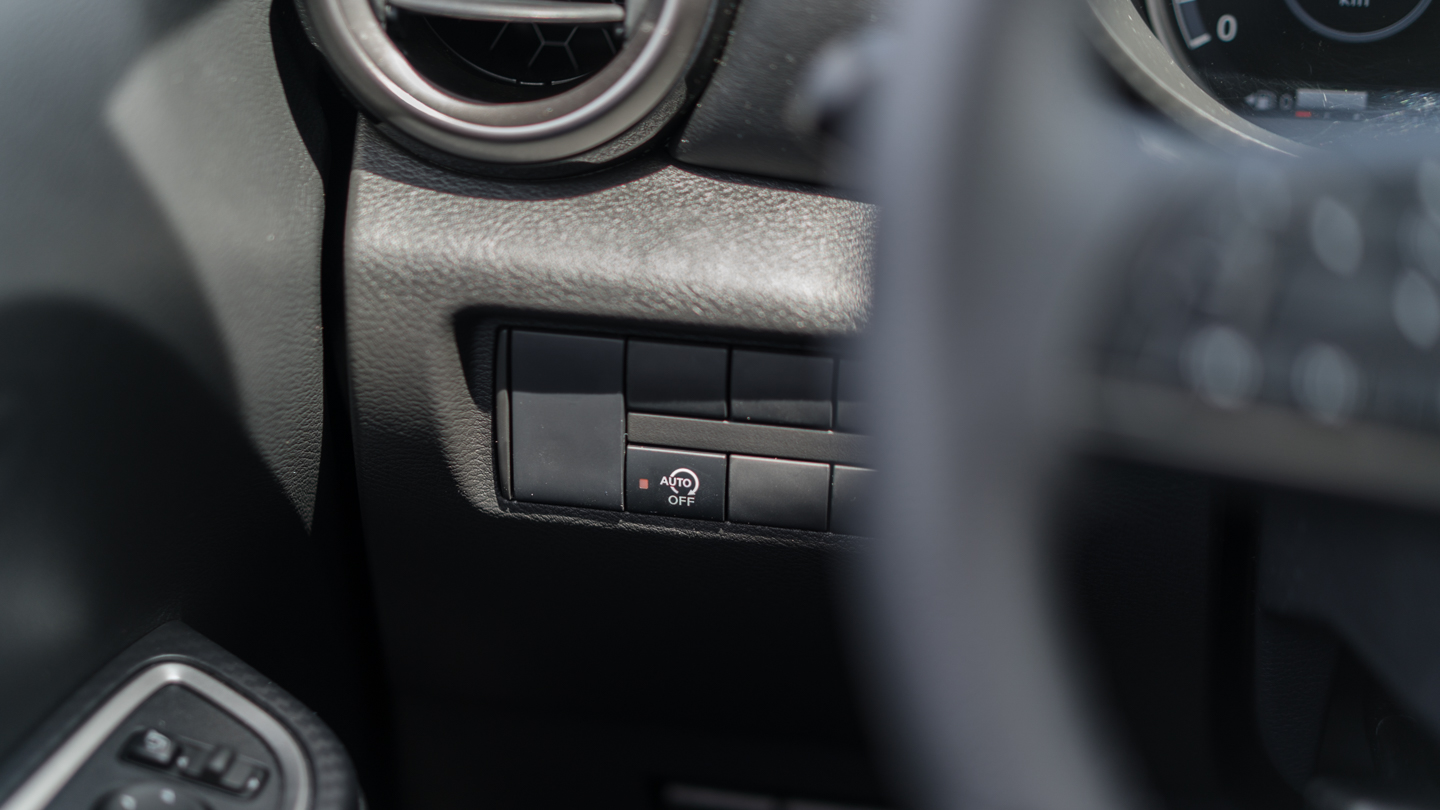 Next up is the ride, I am accustomed to expecting stiff rides from sub-compact sedans. In the Nissan Almera however, I was pleasantly surprised at how comfortable the ride is. I don’t just mean for a sub-compact but its comfortability can be compared to sedans above its class. 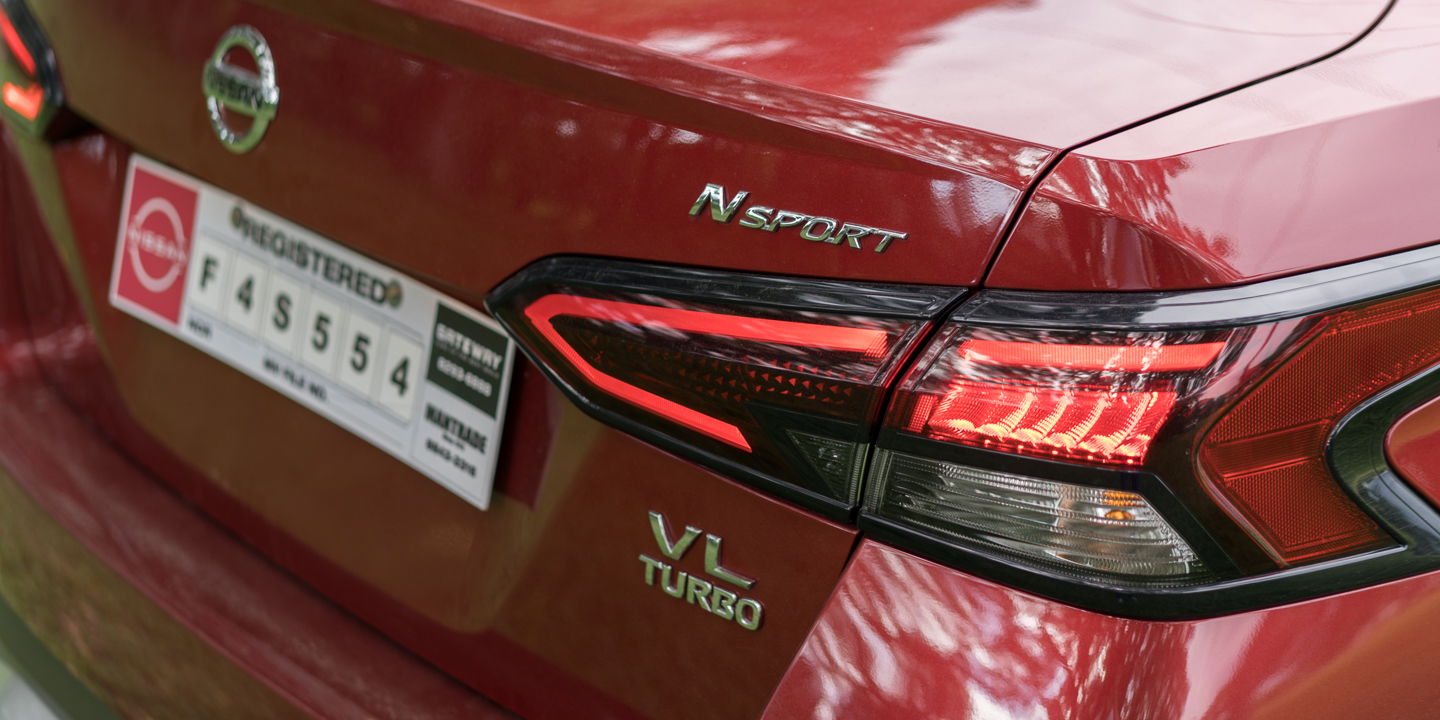 It’s apparent that I have praises for the Almeras driving dynamics because it is that good to drive. I’ll go on further to say that it drives so much better than my personal (2017) Toyota Vios in all aspects. That’s high praise considering the latest generation Toyota Vios still shares the same platform and powertrain as my (older) personal car. As much as I like the Almera I do have some things that I wish were better. First is the NVH level, A lot of the outside noise seeps into the cabin which can be a little distracting. Next is the lack of cruise control, while it’s nice that Nissan put some of their intelligent safety features it would have been more complete with the adaptive cruise control option. Yes the price may go up by adding it, but it would’ve made (an already comfortable and safe) car even better. Here’s where it gets a little tricky, the top-end Nissan Almera VL N-Sport costs PHP 1,098,000. Which makes it the most expensive option in its class by some margin. As a reference, the Toyota Vios GR-S costs only PHP 1,020,000 while the most powerful Honda City RS comes in at PHP 1,078,000.

However, as much as I respect the bullet-proof Vios and enjoy the dynamic Honda City, I honestly think I would splurge for the Nissan Almera. Why? because as an overall package the Almera is better. It’s more comfortable, it is truly fuel efficient, as safe as safe can be, and it now looks the part too.

So to answer the question, not only does the Nissan Almera (finally) step out of the shadows, it now casts its own as well.