Guide to UVVRP: Number coding in the Philippines

While officially known as the Unified Vehicular Volume Reduction Program (UVVRP), Filipinos still remember them through easier to memorize terms such as “number coding,” or for the previous generation, “color coding.” Then again, how does UVVRP or coding work in the Philippines? 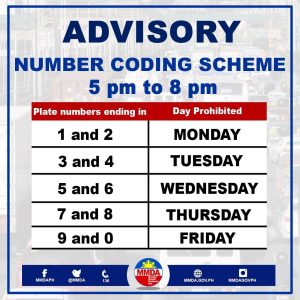 Background: We didn’t always have coding

Among the earliest examples of vehicle coding, also known as road space rationing in other countries, would be Julius Caesar implementing restrictions to private vehicles in Rome for ten hours a day around two thousand years ago. There were exemptions, of course, but one had to imagine the gravity of the traffic problem at the time when people had to deal with wagons and chariots. Today, we have motorized, hybrid, and electric vehicles.

One may think if much has changed since then. The Philippines in particular would be among the first in the world to implement a continuing permanent coding scheme in the modern era. Back in 1995, the Metropolitan Manila Development Authority (MMDA) issued Regulation No. 95-001 to enforce an odd-even scheme. That is, vehicles with plates ending in odd numbers were banned from Metro Manila’s roads on Tuesday, Thursday, and Saturday, while vehicles with plates ending in even numbers were banned on Monday, Wednesday, and Friday.

The scheme was modified over time, and with road users likely affected by ongoing construction of road improvements and new light rail systems in the metro, the perception of its contributions to the traffic situation seemed to have helped extend the implementation of coding until its present form. Eventually, other areas outside Metro Manila also began to implement their own coding schemes, such as those in Cavite and in Cebu.

For a while, the Covid-19 pandemic had arrested traffic volume, particularly in Metro Manila. However, with a recovering economy and the loosening of restrictions, number coding has returned once more. Familiarizing with the coding scheme would help drivers, new ones or veterans alike, ensure smooth trips and compliance with the rules.

As of writing time, the MMDA implements the following coding scheme:

Meanwhile, among those exempted include the following vehicles:

There was a time when the MMDA provided a process to apply for an exemption from UVVRP, particularly for medical personnel and senior citizens (updated as of 2019). However, this is not applicable anymore, apparently, based on the information that the MMDA has provided us. Save for licensed physicians, and per their advice, “the MMDA is not issuing exemption to the number coding scheme as it is only enforced from 5 pm to 8 pm on weekdays…” You can see a screenshot taken today, 22 July 2022, from their official Facebook Messenger account below: 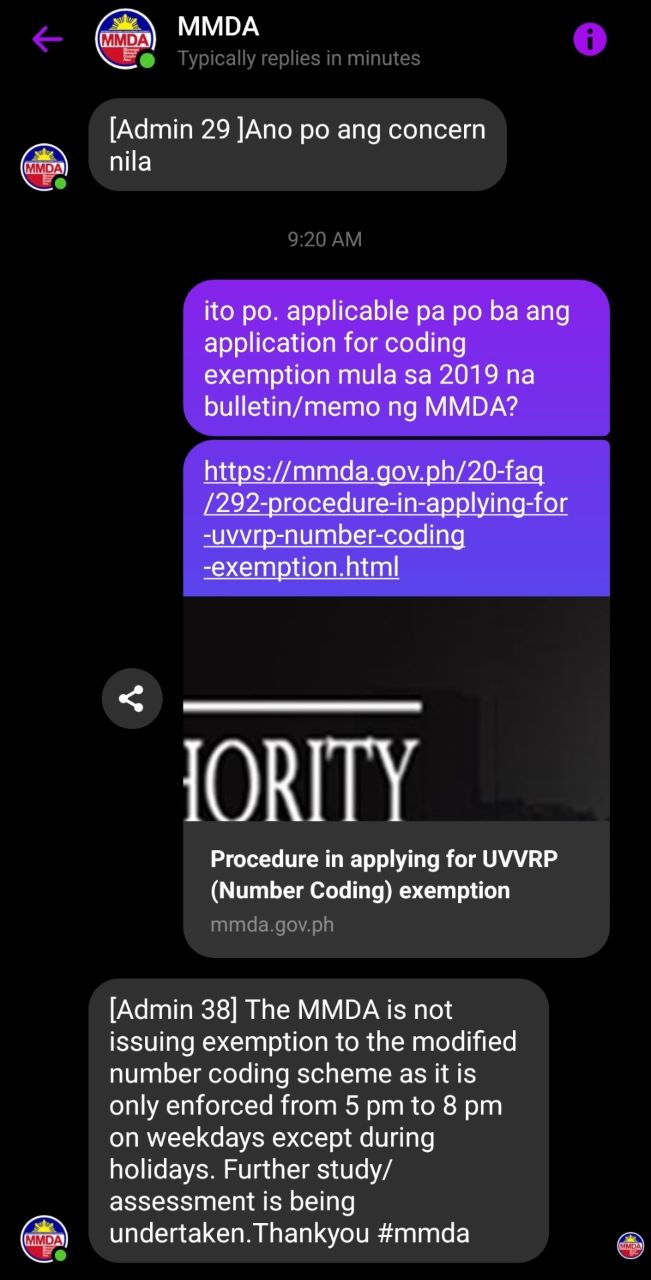 Notably, drivers must also be aware of certain areas which do not fully comply with the MMDA standard. Makati City, for instance, has implemented a modified coding scheme with prohibited hours from 7 AM to 7 PM as of March 2022. Their list of exempted vehicles, meanwhile, includes the following:

Other Metro Manila cities, for their part, do not enforce number coding at the moment. These would include Navotas, Pateros, Marikina (except Marilaque/Marcos Highway), Muntinlupa (except Alabang-Zapote Road), and Taguig (excluding C-5, East Service Road, and Manuel L. Quezon Avenue).

Simply put, if your plate number is covered by the designated coding scheme for the day, your vehicle is not allowed to travel in major roads of Metro Manila within specific hours. If you do violate the coding scheme, the standard fine would be PHP 300. This must be settled within seven (7) days. If it was not issued by the MMDA, you would likely have to settle the violation with the local government unit (LGU) having jurisdiction in the area. Stay safe and check those plate numbers first before you go.

A public servant with a heart for actively supporting technology and futures thinking, responding accordingly to humanity's needs and goals, increasing participation of people in issues concerning them, upholding rights and freedoms, and striving further to achieve more despite our limited capacities. In everything, to God be all the glory.