The 2022 Toyota Veloz has officially been launched in the Philippines. Previously we published an article about the supposed prices, specs, and features of Toyota’s newest 7-seater “SUV”, and now we bring you the official word from its debut. 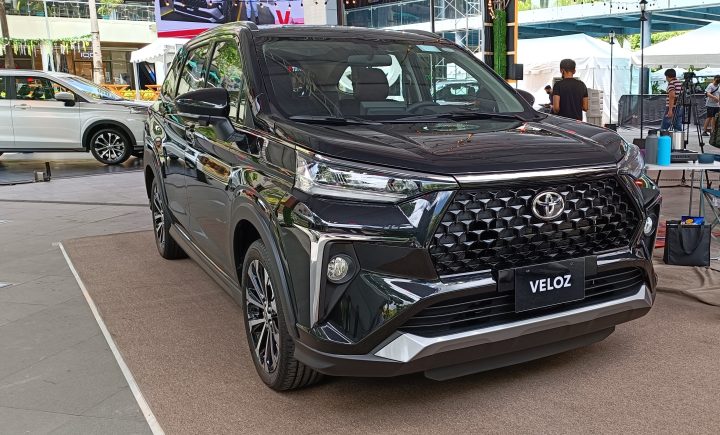 Now its own nameplate, the Veloz is no longer the highest variant of the Avanza. After becoming a brand new model in itself, it comes chockfull of features expected of a Toyota.

On the outside, you’ll see that it has a much meaner look compared to the docile than the 2022 Toyota Avanza. That’s in great part due to the gaping honeycomb grill front and center. The headlight units are similar, but the bi-level chrome piece in between has been changed to a solid piece, with the Toyota badge now housed on the grill. A slatted lower grill remains under the honeycomb to show off more lines on the Veloz’s front end.

Chrome accent pieces border the foglights on the Veloz to add a touch of class. Chrome lower window sills give a nice clean accent on the beltline. On the same token, a wraparound kit with a chin, side, and rear skirt likewise gives it a sporty appeal. The exterior look is rounded up by a set of new 17″ alloy wheels.

The Veloz is also longer, wider, and taller than the Avanza. Measuring 4475mm, 1775mm, and 1700mm, it’s 80mm longer, 45mm wider, and 70mm taller. Strange but expected, though, is the fact that it retains the same wheelbase at 2750mm, and still has the same declared ground clearance at 190mm. It is still pretty much the Avanza’s brother, so we can’t expect a lot of change to the undercarriage. All is well, all is good, though.

As you move to the inside, don’t be surprised to have the same dashboard as well. Though it doesn’t look the same, the shape and ergonomics were also carried over from the Avanza. But of course, you can expect a lot more touches of class and refinement in the Veloz.

Black and white is the color of choice in this vehicle. From the dash to the door cards, to the leather upholstery, it’s all two-colored. The steering wheel is also finished in leather and comes with accent stitching like the seats. Quite subdued but still very attractive no less. The sidings and center stack and console also get brushed aluminum accent pieces. 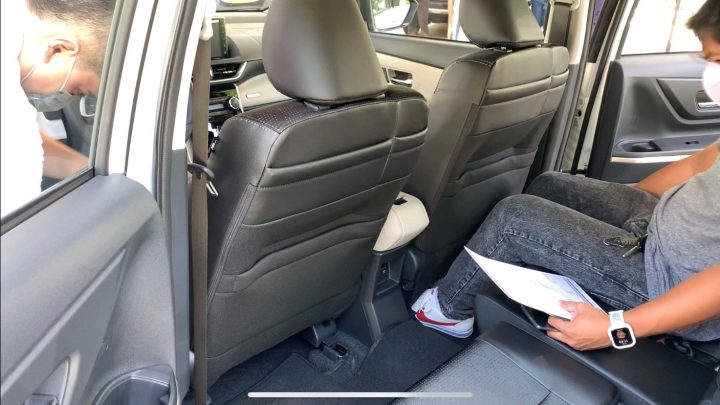 Tech features and amenities in the cabin include either a 9-inch (V variant) or 8-inch (G variant) infotainment display that both come with Apple CarPlay, Android Auto, Bluetooth, AM/FM radio, USB connectivity, and even voice command. For the gadget-heavy family, device charging is provided by way of a wireless charging pad in front, USB sockets in the front and in the middle row, as well as a 12V lighter plug in the third row. 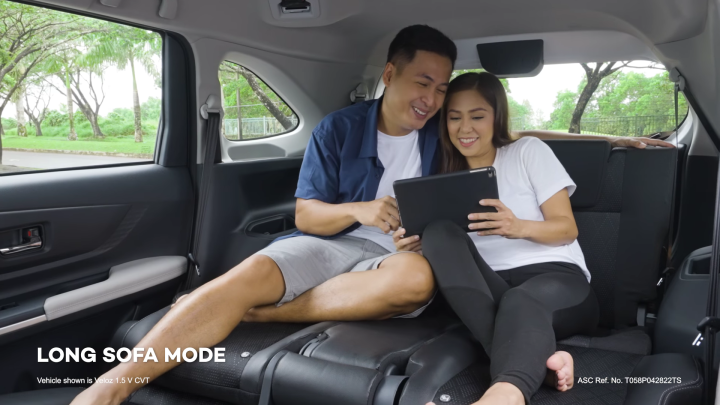 Another nifty feature of the Veloz is the 60:40 folding middle seats and the 50:50 third row. These give way to the Sofa Mode where both rows are folded flat and can be used as a lounge for rear occupants. Good for when you’re stopped over, but please don’t use it while you’re in motion. Safety first, right?

In our previous post, we didn’t get to include its motor, but now we’ve confirmed that the 2022 Toyota Veloz will have a single-engine option. Under the hood is a 1.5-Liter Dual VVTi inline-4 engine that pumps out 106PS and 138Nm of torque. Both V and G variants will have the same mill which is exclusively mated to a CVT; no manual transmission options for the Veloz, ladies, and gentlemen. It does come with three selectable Drive Modes, though: Eco, Normal, and Sport.

The absence of the high-tech suite is a bit of a bummer for those who were looking at the G variant. Considering that almost all features are available in both variants, Safety Sense now falls under a buyer’s penchant for safety. But really, it’s not too big a difference as far as price goes, as you’ll see below.

It’s also been confirmed that the Veloz will have 4 color options: Black Metallic, Dark Red Mica Metallic, Purplish Silver Mica Metallic, and for an extra PHP 15,000 on top of its SRP, Platinum White Pearl Mica.

The 2022 Toyota Veloz retails as follows:

So there we have it, all the official prices, specs, and features of the newly-launched 2022 Toyota Veloz in the Philippines. A lot now wonder why they brought it here, and if it will simply cannibalize the Avanza market, but with the Veloz being billed as an “SUV” (you can check out their website, it’s really not classified as an MPV), Toyota is sticking to their guns and to a different market for this 7-seater.

If it proves to be more crossover/SUV than the Avanza MPV, we’ll make sure to let you know after we come out with our full review of the Veloz. We’ll keep you posted, so stay tuned.

5 signs that it’s time to replace your car battery