The inaugural of the Republic’s 17th President is scheduled for June 30, 2022. In this light, several Manila road closures have been set even before the said date. The closures set as early as June 26 are to prepare for the president-elect Ferdinand “BBM” Marcos, Jr program. There are quite a lot of them, so here’s your quick look at what roads to avoid. 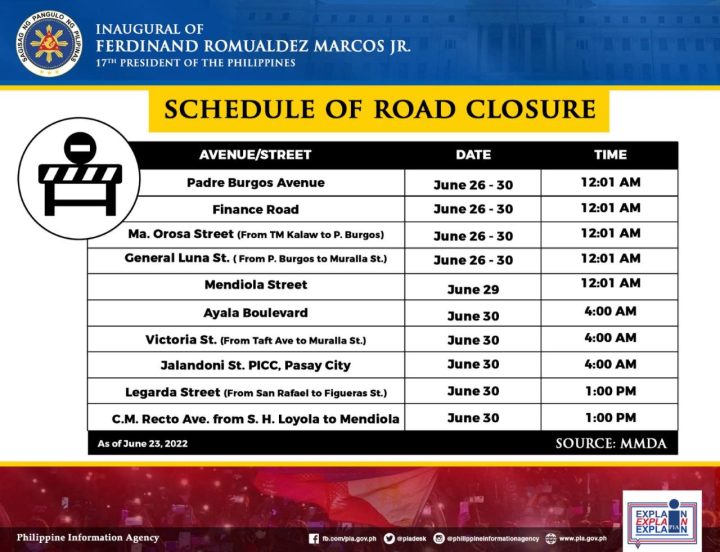 On the inaugural date itself, June 30, Ayala Boulevard, Victoria Street (from Taft to Muralia), and Jalandoni Street PICC, Pasay City will be closed off at 4:00 PM. Also on June 30, Legarda Street (from San Rafael to Figueras) and CM Recto (from SH Loyola to Mendiola) will be cordoned off but at an earlier time scheduled at 1:00 PM.

Manila Mayor Isko Moreno has already declared June 30 a special non-working holiday in the City, so that might reduce the normal traffic volume in and around the concerned areas. To further keep peace and order, the Philippine National Police will deploy 7,000 officers to secure the National Museum of Fine Arts where BBM will be taking his oath.

With vehicles unable to pass through these major roadways following the Manila road closures, expect that areas outside will take the brunt of those traveling on the aforementioned dates. Do try to stay home if you can to save time and money. Besides, fuel prices aren’t being seen to roll back in the next few days, so staying indoors might be a good thing to do.