May has just started, and we already have a bit of a circus in our hands. Last month, a lot of news surrounded the possibility of the MMDA implementing a new 2022 Coding scheme. “Coding”, officially known as the Unified Vehicular Volume Reduction Program (UVVRP), started as a that – a program – and it just became a mainstay ruling in the months after it was first introduced.

A lot of outfits have gathered information about the amended scheme possibly taking effect on May 1, 2022. That was two days ago, and as we speak, no new policy. Later on, other government sources published their take that it will roll out in mid-May. The government report(er) went so far as to say that a decision from the Metro Manila Council was expected to be made after Holy Week.

As of last night, both speculations and more have been quelled by the MMDA. On their official Facebook Page, they announced two major clarifications.

The first of which is about the circulating infographic online, one that indicates a part of the proposals for the new scheme. It’s strange because the said infographic came from the MMDA’s Official Facebook Page; it was lifted out of a live video (now re-watchable as a recorded video) that was streamed on April 11, 2022, at 10:44 PM, and it was part of the presentation of Authority Chairman Romando Artes. The said video can still be found here, and Chairman Artes’ presentation starts at the 1:19:09 mark. 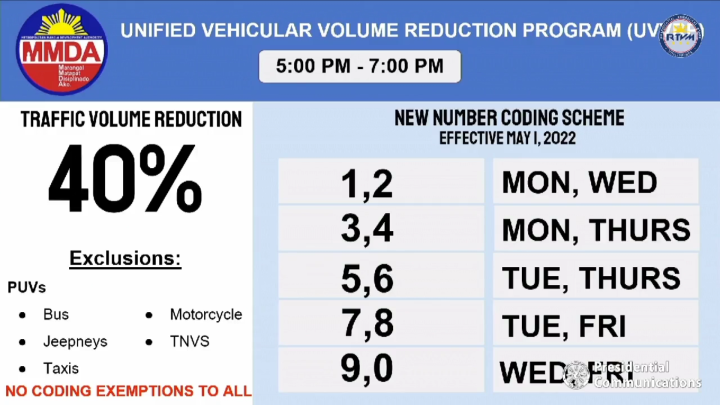 No doubt that this is now confusing, indeed. But, the main takeaway here is the fact that as of this writing, there are still no rules for the new 2022 Coding scheme, and its implementation has no definite date as yet. This much is clear, ladies and gentlemen. While older and various news outfits and items have said the contrary last month, this is where it stands right now.

The second rumor that they wanted to clear out is regarding supposed “Unified Curfew Hours”. The said infographic can be seen below. Flat out, the Agency said that this is fake and that no such announcement came from their end. While they did acknowledge that different LGUs may have their curfew hours, especially for minors, they disavowed any participation in this statement. Again, there is no such thing as “Unified Curfew Hours” in Metro Manila, ladies and gentlemen.

At this point, everyone’s already confused and agitated. What with the national elections, a pandemic in our hands, and all this traffic hullabaloo are we to do? A good rule of thumb is to verify. Keep verifying your sources, and don’t be afraid to ask. If it comes from the proverbial horse’s mouth, then take a screenshot or a photo. A “receipt”, if you will.

No one should be in the business of spreading fake news, more so at a time like this. We are with you, MMDA! Let’s keep it factual, and let’s keep it all real.