It has been said time and again that the MMDA’s job is tough. Very tough. It takes a lot of patience, and intestinal fortitude for law enforcers to put their foot down on erring motorists especially if they are met with resistance, or worse, arrogance borne of ignorance. No, we do not mean to say that in a derogatory way, but we are pertaining to not knowing the law which leads to real or feigned ignorance.

At the head of many MMDA operations is Task Force Special Operations Head Col. Edison “Bong” Nebrija. His “exploits” have been well-documented as he and his team go about their daily business and some of those caught on camera are enough to make you cringe, and feel a hint (or a lot) of anger, but mostly frustrated because of blatant audacity in brushing off the law.

Let’s have a look at two examples. Specimen A. Here we see Nebrija’s team asking for the license of a man driving a vehicle that was illegally parked. The said vehicle is to ferry its passengers to the airport. In true Filipino fashion, the vehicle did not park properly because the foreign passenger was already late and needed to speed off to catch his flight. Insert finger-wagging of the MMDA. Nope, that is unacceptable.

Here’s what makes it bad, aside from the traffic violation. In the aforementioned (linked) videos, the driver allegedly did not hand his license over as quickly as he should have. What makes it worse, though, is how the passenger in front started calling the MMDA, its team members, and traffic rules “stupid”. Any normal mortal would’ve flown off the hook, but Nebrija did his best to keep his cool, but you can tell with his voice’s tone and volume that he was having none of it.

“We are not stupid. We are enforcers of the law. You do not call us stupid. You are in our country, we are enforcing the law, so you do not call us stupid,”, Nebrija said. The foreign passenger quickly backpedaled and said “sorry” a couple of times but clearly, the damage has been done. It may not show, but hurling any expletives at the MMDA’s law enforcers who are properly doing their jobs will always take a toll both mentally and emotionally.

Eventually, it seems the driver relented (he had to!) and gave his license to the enforcers. But this was not before the passenger in the back of the vehicle said that the foreign visitor’s experience “was ruined because of this”; the passenger seemed to be a fellow countrywoman, but we cannot say so for certain. Regardless, we’ll touch more on such statements later. 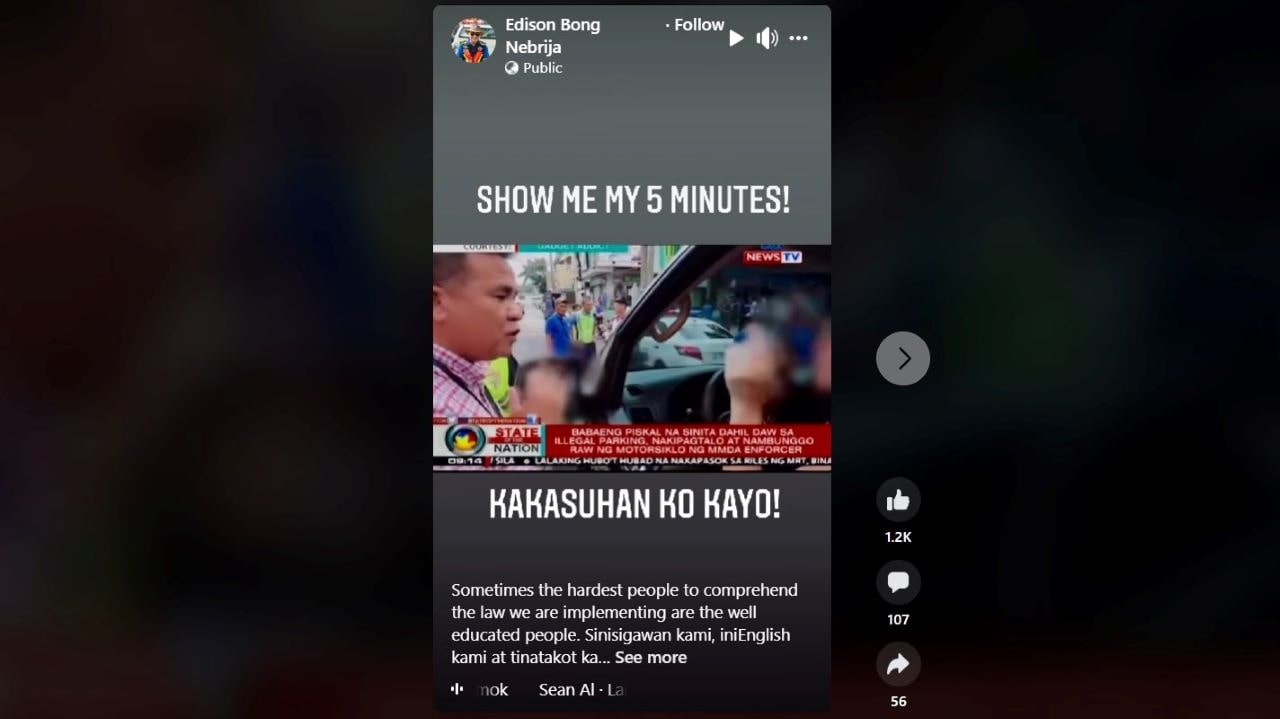 Specimen B. Here we see the Nebrija and his MMDA team getting ready to tow yet another vehicle that is allegedly illegally parked. Curious, though, is that the driver/owner seemed to have been in the vehicle the whole time. This is one detail we again cannot ascertain 100% given that there’s no other video showing what led to this apprehension, though. But let’s move forward.

See, the law states that for any vehicle that is illegally parked, the driver/owner whether he/she is inside or not inside the vehicle will be handed a ticket for the violation. The implementation of towing unattended, illegally parked vehicles entails enforcers blowing their horn 5 times to call the owner’s attention. After 1 minute, another barrage will be sounded. If no one comes down to move the vehicle, then it will be towed.

In the video, we can see the lady inside the vehicle – in full English – arguing with and asking Nebrija to “show me the 5 minutes”. Another thing we should note is how Nebrija said that “you’re not supposed to run away”, to which the lady refuted “your enforcer blocked me”. This is escalating pretty quickly. It’s alleged that the driver had bumped into an MMDA vehicle while trying to “run away”, and when she was finally pulled over, the conversation you see in the video above ensued.

To make this incident worse, the lady proceeded to point at the tow truck personnel while saying (and threatening) “Huwag mo i-tow iyan. Kakasuhan ko kayo [Don’t tow that. I will sue you.].” 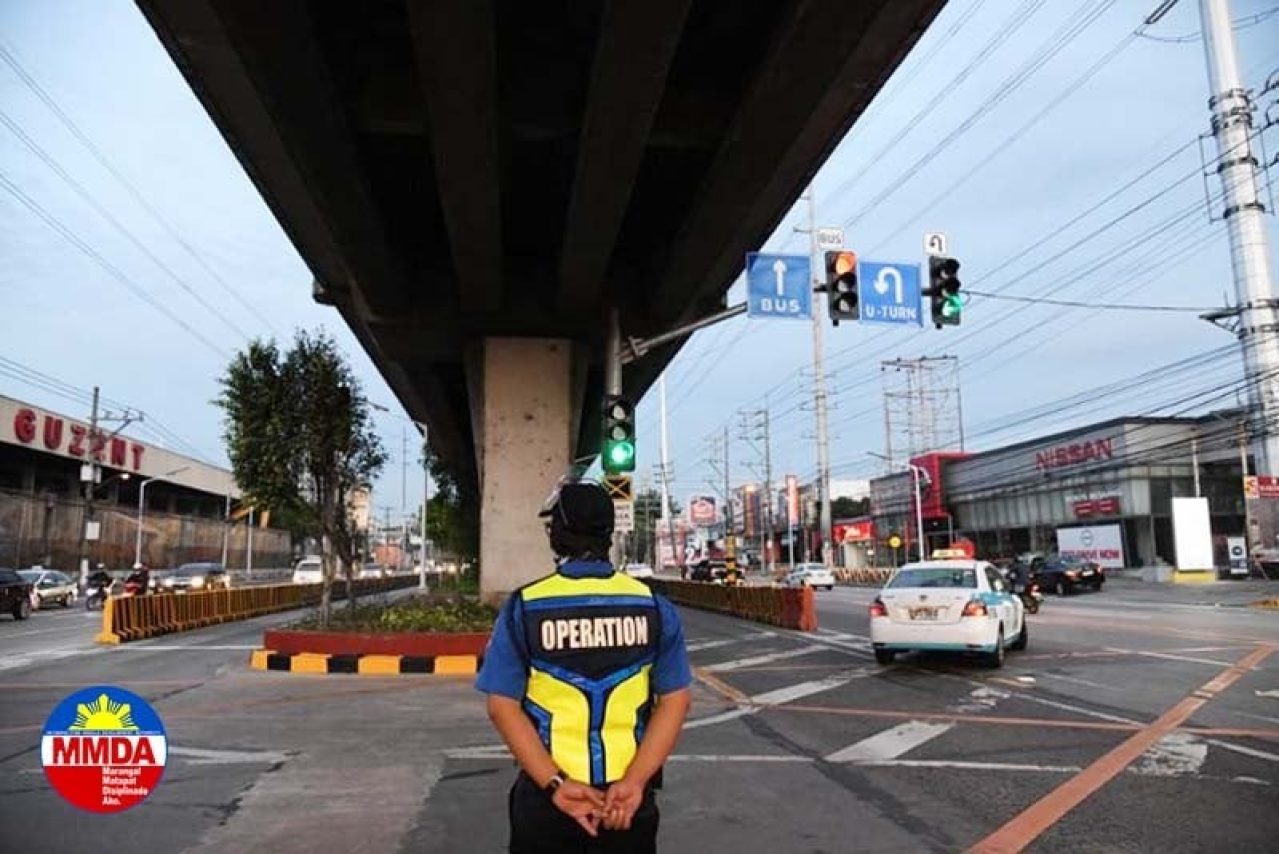 While not every traffic rule violator has an immense stock of courage, ignorance, and arrogance in their pockets, the examples we have seen above show the clear state of obedience and sadly non-obedience to clear-cut laws in the Philippines (as far as motoring goes, of course).

Going back to what we mentioned earlier, do we really think it is relevant and proper to assess someone’s first time in our country as having been “ruined” because his or her driver was caught breaking the law? Does parking in an illegal spot, with full knowledge, warrant us to point fingers and threaten law enforcers with their only weapon – the law – in doing their job effectively? Do such brazen statements and willful acts have that much power to give anyone authority to be above the law?

In this day and age where information for educational purposes is widely available for everyone to see and use, not knowing what is right from wrong is just not an excuse. Ignorance of the law must never serve to fuel arrogance in arguing the (non-) merits of one’s breaking the law. Let that be clear, please.

For motorists, it will serve us well to remind ourselves that having a driver’s license is a privilege and not a right. With such a privilege comes a responsibility to know our land’s traffic rules and abide by them, lest be caught by the long arm of the law. If you’re wrong, then you are wrong. If you are right, then be calm and speak decently and properly to those who represent the MMDA, the law, and perhaps even Lady Justice herself.

The MMDA already has its hands full, let’s not add to their burden by being habitual lawbreakers. Or ignorant, arrogant individuals, generally speaking, of course.