From dreamer to winner; My Vios Cup Autocross 2022 Round 1 Recap – Feature

Growing up I wanted nothing more than to race cars for a living, as far back as I can remember I was enthralled by anything that had 4 wheels on it. Even more so when I started watching races on TV, I would be glued to the screen imagining that one day I would be doing the same and in the end besting the competition.

Alas, it was not meant to be, the costs to further my dream were just too high. The feeling of competition, frustration, and glory on the track would remain a dream – until recently. The chance to “live the dream” came about in the form of an invite. The kind people at Toyota Motor Philippines invited me to take part in the upcoming Vios Cup Autocross Challenge, of course, I grabbed the opportunity with the same enthusiasm as a dog with a bone.

Just to give a little background, the autocross challenge is a slalom type of race, where a driver navigates a “made up” layout between cones and barriers. The main idea is to race around the course without hitting any of the obstacles, sounds easy, right? nope. Apart from the obstacles, drivers are racing against the clock.

Those who clock in the fastest time are considered the winners, and to add further difficulty, every cone hit adds an additional 2 seconds to the overall time, and if you do happen to run over a cone and take it with you, it would correspond to automatic disqualification. Also, this isn’t just a one-off event or publicity stunt, the autocross challenge is split into 3 rounds throughout the whole 2022 Vios Cup season. Points will be awarded per event, and an eventual champion will be crowned at the end of the season.

I was lumped into the media class, which was then further divided into 2 sub-classes; Sporting and Promotional. I was put in the Promotional class, which consisted of a mix of first-timers and some returnees of the competition.

As I digested all of the information given to me, apart from the apparent excitement, I’d be lying if an onset sense of nerves weren’t creeping in as well. The first round of the event was slated to take place on July 2, 2022 (Saturday), but as a competitor in the Vios Cup autocross media class challenge, I along with my fellow media representatives were tasked to be a the Clark International Speedway a day before. This was so we could practice and be given a series of “briefings” to maximize our chances of winning.

I arrived on track on the morning of July 1 and was greeted by the sight of a fully-fledged “race weekend”. Cars being shuffled around by mechanics, drivers milling about the paddock, the smell of burned rubber and petrol wafting through the air, and finally the sound of racing engines being put to the test. I remember having to pinch myself that I was actually here, not just as a spectator but as a competitor as well.

After the mandatory registration, I was given a complimentary race suit for the weekend and almost immediately I was instructed to make my way to the track for the 1st practice session. I walked onto a damp track, the rain had been intermittent throughout the morning. My first “go” around the track was purely sightseeing and familiarization, I needed to first understand the layout so as to not get lost. Easier said than done, as most of the competitors wound up confused by the layout, I was lucky enough to have the presence of mind not to do the same.

After the first practice, we were ushered into a room where the first briefing was set to take place. Knowing the stakes were high and the competition was fierce, a team of dedicated and seasoned instructors from Tuason Racing School (TRS) was on hand the whole weekend to help each driver get the best out of themselves. It must also be said that apart from teaching us how to “race” as fast and as best as possible, the driver briefings were also lessons in how to be safer and more confident drivers on the road. Some of the lessons taught to us were proper seating and hand position, how to apply the brakes properly, and proper car understanding.

The last part I found particularly useful, as any self-respecting racing driver should know how his or her car will behave on track during certain conditions. The first briefing ended, and once again we were told to go back out to the track to commence the second and final practice for the day. With a little more confidence (and a slightly drier) track I pushed myself further and got a decent result in the end.

Following the second practice, we had a final briefing where the rules of the competition were explained. At this point, the reality of the competition started to sink in more, I realized that I was not only racing for myself, but I was also representing my publication, and I sure as heck did not want to embarrass myself at the expense of my publication.

I ended day 1 lying in bed well into the wee hours of the morning praying to all the deities I know. If day 1 was the appetizer, day 2 was the full-on main course. More people, more cars, and more spectators (gulp). I arrived as early as 6:30 am to be able to take part in the final practice. A full night of rain once again coated the track in a sheen of dampness. I for one was not downtrodden by the conditions, I felt that if the track was wet, I would be able to test my limits even more. Which I did, and even learned my lesson after braking late and hard into a damp corner, nearly inducing the feeling of needing to “relieve myself” right then and there. Before I knew it, time was up and all that was left was the competition itself. The morning held the opening ceremonies followed by the actual circuit races. These events breezed by like nothing, and before I knew it we were told to head to track for the qualifying/semi-final round of the autocross challenge.

I remember being belted into the racing seat (snuggly), putting on my helmet, and taking deep breaths as I awaited my turn. 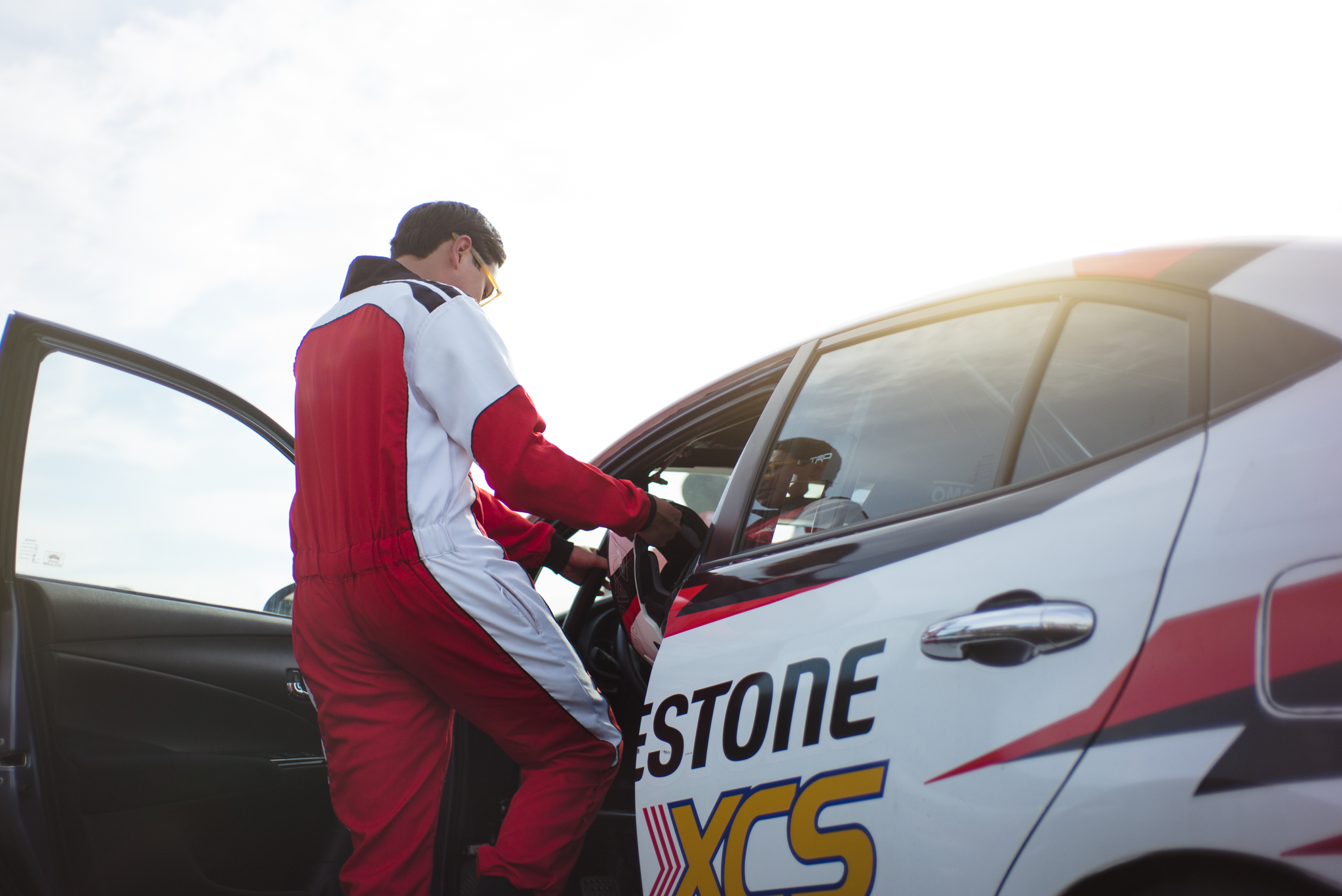 I drove to the start-finish line trying to remember everything I was taught and practiced the day before. The marshal counted me down “Ready? 3, 2, 1, GO!”.

To be able to give you an honest and accurate account of what happened next would be a lie. As soon as I dropped the brake pedal and floored the car I entered a “trance”, it was as if my body and instincts had taken over. I only remember the sound of the revving engine, the squeal of tires, and the frantic steering inputs.

I crossed the line (coming out of my trance) fastest in my class. I had done enough, I was through to the final. Instead of celebrating, I remember telling myself to keep my head in the game, the competition was far from over. Another long “lull” took place between the semi-final and the final, I remember being too nervous to eat lunch and as the adrenaline subsided I felt heavy, without a care in the world I slumped in my seat during lunch and snoozed the “lull” away.

By the time the finals round came, It was late into the afternoon. As the sun began to lower itself, it cast an awe-inspiring light on the track. The stage was set, and it was time to give it my all. For the finals round, the mechanics of the competition were altered, while the fastest time still mattered, it was now a head-to-head. 2 drivers on opposite sides of the track raced each other and the clock, meaning whoever crosses the line first wins. 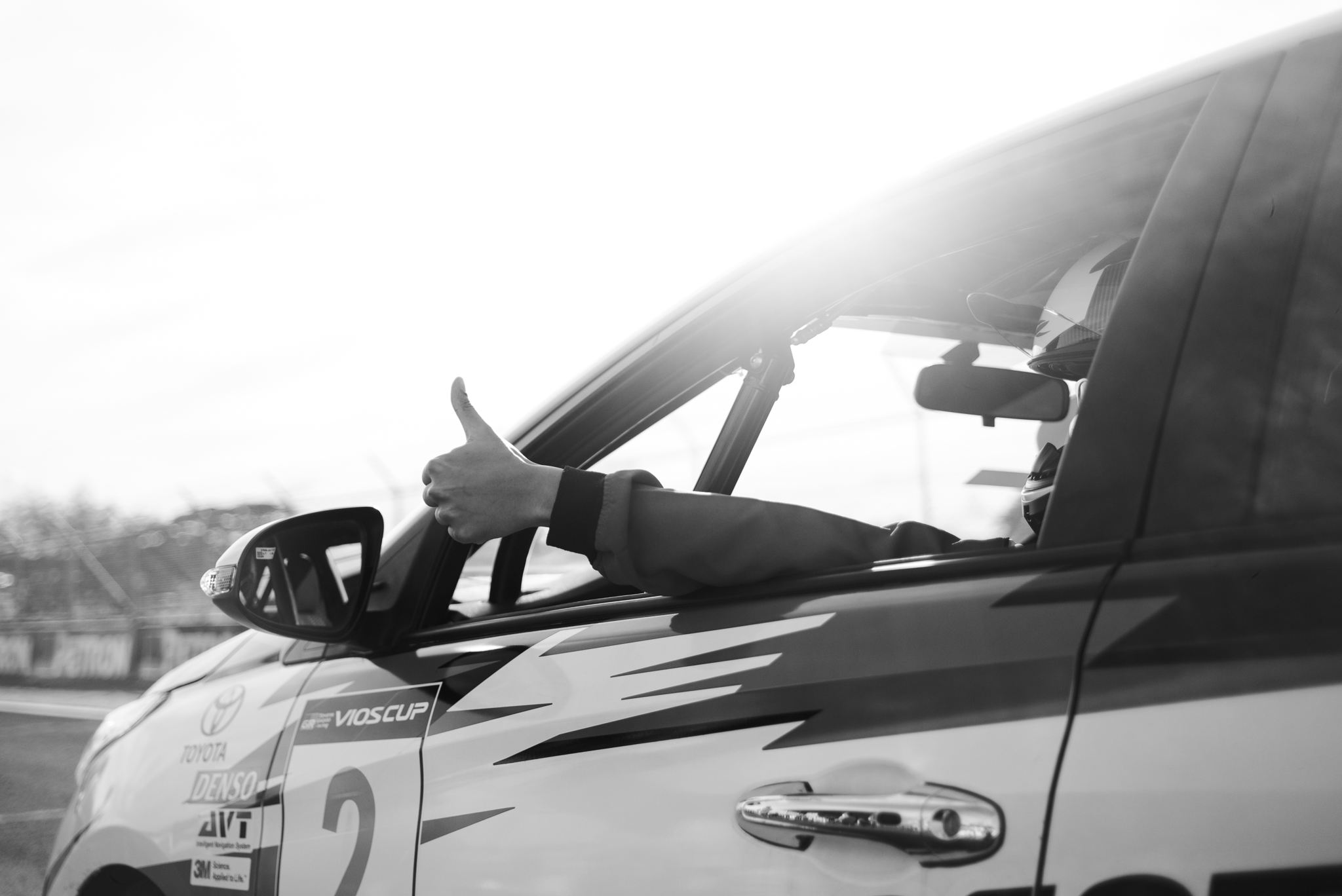 Once more, as I drove to the line to start the finals the “trance” set in. To say I drove my heart out would be an understatement, every fiber of my being was tuned to give me the best reaction times and as much bravery as possible. My final lap went by like a blur, and as I crossed the line, I looked over at my competitor still navigating the final sequence of obstacles, it seemed I had done it.

After the marshalls conferred the final times, I faintly heard “Pablo Salapantan Winner!”. At that instance, I drove back with a sense of euphoria, punching the air and admittedly a little teary-eyed at the fact. After clambering out of the car I remembered the saying “Be magnanimous in victory, and dignified in defeat”, I walked over to my competitor and shook his hand congratulating him for a job well done. I also remembered the unselfishness needed to be a true champion, I had a couple of close friends who drove all the way to Clark to support me. I aptly walked over to them each, thanking them for coming and cheering me on. The win (while mine) was a tribute to those who believed in me and knew that I had it in me to prevail. In the end, after the customary congratulations, I was finally able to revel in what I had just achieved. I had just won a fully sanctioned racing competition, against capable racers, in front of a boatload of spectators. Just to add the final cherry on top of the sundae that was my race weekend, I was also afforded the opportunity to stand on the top step of the podium. Lastly, the competition is far from over. Although I had won the first round, there are 2 more to go, and living the dream continues.