In case we have forgotten, Republic Act 10913 or the Anti-Distracted Driving Act (ADDA) is still very much an existing law. As with all laws, yes, it is still being enforced as we speak. The “relaxed” conditions that the pandemic has brought might have sidelined this fact, but now that more cars are already plying our roads daily, we thought we’d remind you of the law, its guidelines, and how much you have to pay and what penalties await should you get apprehended for violating the Anti-Distracted Driving Act. 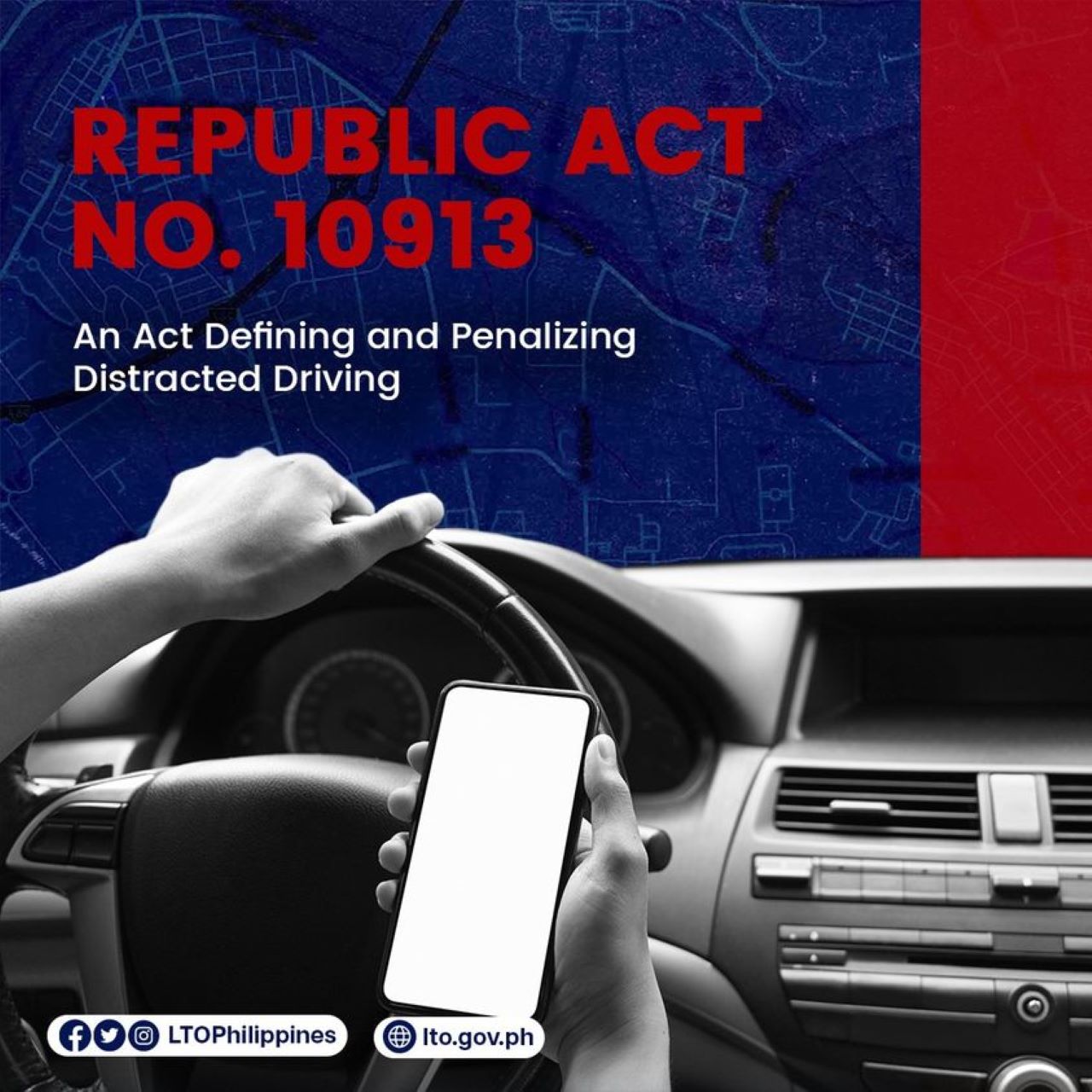 The Anti-Distracted Driving Act or ADDA prohibits the driver of a motor vehicle from holding and using mobile communication devices (so yes, even tablets are included) and electronic entertainment gadgets. The biggest provision of this law is that any form of usage is not allowed whether the vehicle is in motion or even while temporarily stopped at a traffic light or intersection.

Most if not all motorists use stoplights to compose messages or browse through content, but be warned that you can be apprehended for doing so.

What vehicles are covered by the Anti-Distracted Driving Act?

Those caught using any of the modes of transportation in the last bullet point will still be apprehended, issued a ticket, and escorted up to the nearest authorized payment center to settle the fines for the violation.

If the driver does not have the cash to pay for the fine, enforcers will have the authority to take the motorist’s vehicle for safekeeping for six (6) months until the violator finally presents a receipt as proof of payment of the fine.

If after six (6) months the violator fails to settle the fines, then the LTO will have the authority to sell the impounded vehicle in favor of the government.

PUVs are not exempted, and those caught in violation of the Anti-Distracted Driving Act will have the PUV’s operators and owner/s held liable.

Prohibited acts in the Anti-Distracted Driving Act include, but are not limited to the following:

The most curious item in this list involves “making or receiving calls”. To clarify, making or receiving calls can only be done using the hands-free function of mobile communication devices. Normally, vehicles will have such controls mounted on the steering wheel, but other speaker phones, earphones, microphones, or other similar devices that have such a function can be used as long as it is done without holding the mobile device.

Another exemption to this specific rule is when the driver needs “to make or take emergency calls to authorities in cases of a crime, accidents, bomb or terrorist threat, fire or explosion, instances needing immediate medical attention, or when personal safety and security is compromised.”

See also  Most Expensive Production Motorbikes in the Market

Ultimately, “even if a driver is stuck in traffic, as long as he or she is behind the wheel, he or she is still not allowed to hold and use a cellphone and/or gadget to make or receive calls; write, send or read text-based communications; play games; watch movies; perform calculations; read e-books; compose messages; surf or browse the internet; or other similar acts. *when setting destinations on GPS devices or navigation apps, the driver must pull over at a safe place before doing so

Remember that only mobile communication devices and other electronic gadgets are covered by the Anti-Distracted Driving Act. Should a vehicle owner decide to “adorn” the vehicle’s dashboard with accessories such as rosaries, tachometers, figurines, dashboard toys, crucifix, and stickers, among others, that is allowed.

Acts such as putting on make-up, drinking coffee, and other similar acts are likewise not covered by the Anti-Distracted Driving Act so these are also allowed.

Who is authorized to apprehend motorists for violating the Anti-Distracted Driving Act?

Only individuals from the following government agencies can apprehend motorists for ADDA violations:

Penalties for violation of the Anti-Distracted Driving Act

Where to settle violations of the Anti-Distracted Driving Act

Motorists apprehended by the LTO and/or PNP-HPG enforcers may settle their violations in the nearest LTO Office covering the area where they were apprehended.

Those apprehended by MMDA enforcers may either settle their violations thru select Bayad Centers within 7 days after they were issued a ticket. Violators may also pay their fines at the MMDA main office in Guadalupe, Makati City.

In the interest of fairness, people would ask how apprehending officers will know what drivers are doing behind heavily-tinted vehicles. The MMDA replied that “Aside from high-definition cameras that can monitor lights from devices inside heavily-tinted vehicles, the law will also be strictly enforced by enforcers on the ground who are trained to determine from the movement of the vehicle whether or not a driver commits distracted driving. A Memorandum Circular setting specifications on the regulation of tints shall also be released by LTO soon.”

So there you have it, ladies and gentlemen, a condensed list of what you cannot do, what are allowed, who can apprehend you, the penalties, and how you can settle your violations of the Anti-Distracted Driving Act. With the MMDA and other government agencies and LGUs kicking No-Contact Apprehension into high gear (despite some resistance), we can expect that they’ll be keeping their law enforcement entities’ eyes peeled, more so after this reminder.

The Anti-Distracted Driving Act is there for a reason: safety. Fundamentally it is very sound law. Yes, we may all have more questions or complaints but for as long as these rules are in place, our responsibility is to follow them until a new course or guidelines are set. After all, we wouldn’t want to cause an accident just because we’re checking our Likes and Follows on social media, right?