The 2023 Lexus RZ has finally been unveiled, and wow does it look good! Of course, there’s more to Lexus’ first pure battery EV aside from its looks, and those are all that we’ll be looking into today. It was only yesterday that official news about its release was included on the local Lexus website. There’s a whole lot of information, but we’ll tell you all you’ll need to know about the RZ. Starting off with its exterior, you’ll immediately notice a new spindle grill. It’s always been a honeycomb design, but for the 2023 Lexus RZ, they described the new look as “a three-dimensional mass that has evolved into a new expression called the spindle body”. This along with three-dimensional fenders that flank both sides of the spindle grill help the RZ show a much sportier and assertive stance.

From the side, the illusion of the fenders wrapped around the tires is achieved by blacked-out flares. More three-dimensional cues flow back to the rear fenders and show off the width of the RZ a lot better. The rear likewise makes the RZ look wide. The familiar Lexus badge has been replaced with each letter of LEXUS smack in the middle of the rear hatch, which is flanked by horizontal rear combination lamps. 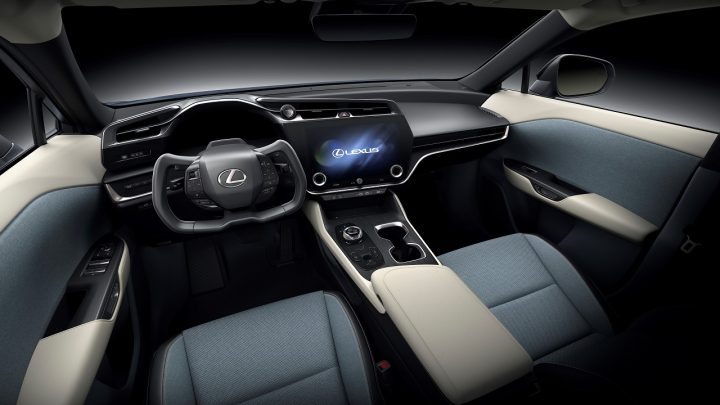 In earlier teasers, the futuristic interior of the 2023 Lexus RZ was shown, albeit just from outside the driver’s window. Now we get to see it in its full glory. Modern and futuristic are an understatement if you ask us. Just look at that steering wheel; if it’s even still a wheel at all. But more than the novel appearance, the dash was inspired by what Lexus calls the Tazuna concept.

Basically, it’s Lexus’ human-centered philosophy that creates driver-centric ergonomics. From the appearance to the size of the digital gauge cluster, the infotainment system, and even the location of toggles and switches, the driver need not reach or look far. This is what keeps him or her in tune with the full driving experience.

That is so Lexus. And we’re not complaining. The 2023 Lexus RZ is meant to be a five-seater. If it’s people you’re riding with, the long wheelbase provides a lot of room in the second row. Despite the raked roof design, the RZ still boasts ample headroom in the back. Couple this with premium materials for the seats, ambient lighting, and a massive panoramic sunroof, you know that the RZ is all about sporty and luxury.

Cargo space is also quite versatile as the RZ has rear seatbacks that fold 40:60. If you’ve just gotten your groceries and maybe an extra microwave and toaster to come along with, you’ll find that you have more than enough space for all of that in the RZ. 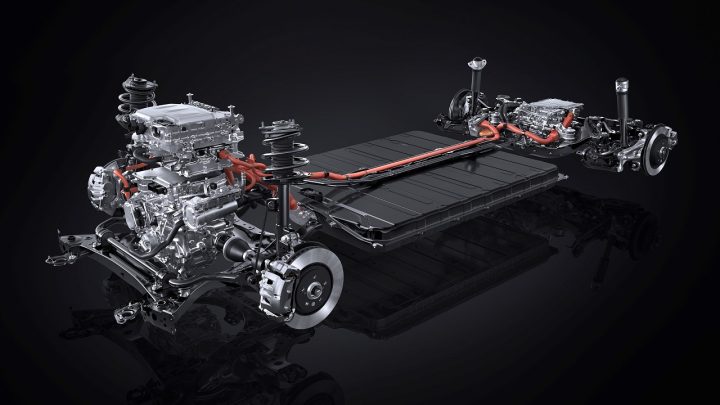 Lest we forget, Toyota also released their own pure battery EV, the bZ4X. Being sister companies, the luxury marque did one better over the bZ. The RZ runs on an all-wheel-drive system called named Direct4. Direct4 controls the drive force of all four wheels. With it, you can expect improved start-up acceleration, handling stability, and low power consumption.

The 2023 Lexus RZ derives power from two electric motors that get their juice from a hefty 71.4-KWh battery that’s the same as the Toyota’s. Given Lexus’ penchant for raising the bar, the RZ pumps out 312 PS (97 PS more) and 435 Nm (99 Nm more) of torque compared to the bZ4X. What Lexus didn’t get to improve on is the RZ’s range. It can supposedly go a distance of about 450 kilometers, and that’s exactly the same mileage you can get from the bZ. That’s still a lot of range, though, and that is still good.

See also  All New 2022 Honda CRF250RX released in the Philippines

Another highlighted feature of the 2023 Lexus RZ is its Steer-By-Wire system – a Lexus first. Steer-by-Wire enables the electronic exchange of steering and road surface information between the advanced steering control and tires via electrical signals, not a mechanical linkage. For those who look for steering wheel feedback from modern vehicles, this is Lexus’ answer. No information on pricing was given by Lexus, but the 2023 Lexus RZ is expected to be released in the North American market by the end of this year. We can guess, but given that this is a Lexus, it will be priced accordingly for the badge that it carries. And since this information came from the Philippines site of Lexus, we hope we do get it in the country. Who doesn’t want a pure battery EV from a luxurious Japanese carmaker, right?