Comments ranged from sarcasm to frustration and just plain anger. And with good reason. For those who are in the line of On-Call doctors, they’ll have to have the freedom to travel. The government has just released a statement to clarify and seemingly remedy this problem. You can see the statement below, signed by MMDA Chairman Romando Artes himself. 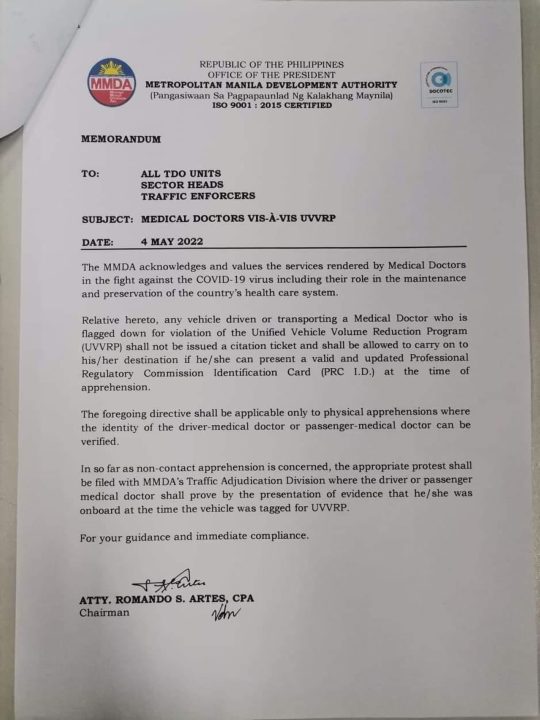 Per the Memo, physicians are and will be exempted from Coding, provided that they can readily be identified as either the driver or the passenger of the flagged-down vehicle. The physician’s Professional Regulatory Commission Identification Card (PRC ID) will have to be presented so whoever is driving will not be issued a citation ticket. This is only for physical apprehensions, of course.

For those who may get caught by the No-Contact Apprehension system of the MMDA, the Memo can be quoted as saying “the appropriate protest shall be filed with the MMDA… where the driver or passenger medical doctor shall prove… that he/she was onboard at the time the vehicle was tagged for UVVRP”.

As of this posting, there is no official statement published on their official channels. They did Re-Tweet a local publication’s post, though. So we went ahead and consulted with the Agency’s official FB Messenger account and this is simply what they had to say: 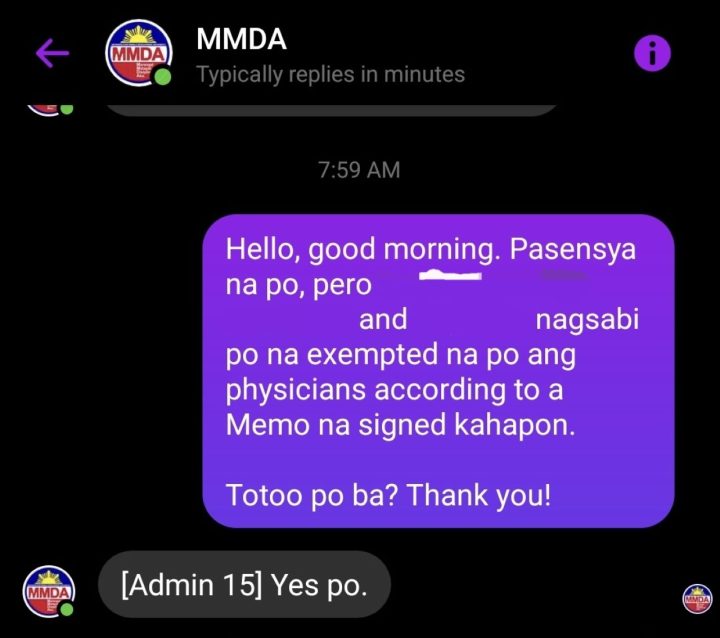 So this solves the debate. Doctors, you are exempted from Coding. But second, this comes with a caveat. You have to either be the one driving or be a passenger in the car at the time of your “apprehension”. But now, this poses more questions.

First, about having to go to the MMDA to contest a No-Contact Apprehension. In their busy line of work, this may be seen as an added thing to do. Second, for those who might have to be picked up, of course, they won’t be in their own vehicle yet before they’re fetched. What provisions cover this loophole? Third, what of other healthcare workers such as nurses and medical technologists, among many others? Will the MMDA issue an exemption for them as well?

We’re sure that those granted coding exemptions are very relieved, indeed. But we also hope that the inevitable questions will also be attended to and answered by the MMDA. Those who look out for everyone’s health and wellbeing deserve it.