A lot of speculations and teasers made their way to the internet, but now we have a clearer picture of what the 2023 Honda CR-V may look like. The biggest “leak” that came out was one from last week, showing an in-the-metal image of what’s definitely a Honda crossover that looks very much like the CR-V.

Well, we don’t have to guess anymore because these are the first official photos of the new CR-V straight from the Honda newsroom itself. It’s not going to be a simple MMC or minor model change, for sure. If anything, what these photos show is actually pretty exciting. A lot of us have heard that “Hondas are all starting to look the same”. From the Accord to the Civic, to their MPVs and the Brio, yes they all have very similar designs. And it looks like the incoming CR-V will finally “look the same” as the others in the Honda stable. If anything, it actually looks a lot like the HR-V.

A hexagon-honeycomb grill takes front and center, and they’re flanked by much sleeker headlight units. The bumper seems to have gotten a redesign as well. Lots of curves and creases have been added for both a sleek and sporty look. What’s odd, though, is that there don’t seem to be foglight units. Perhaps this is a lower-end variant? 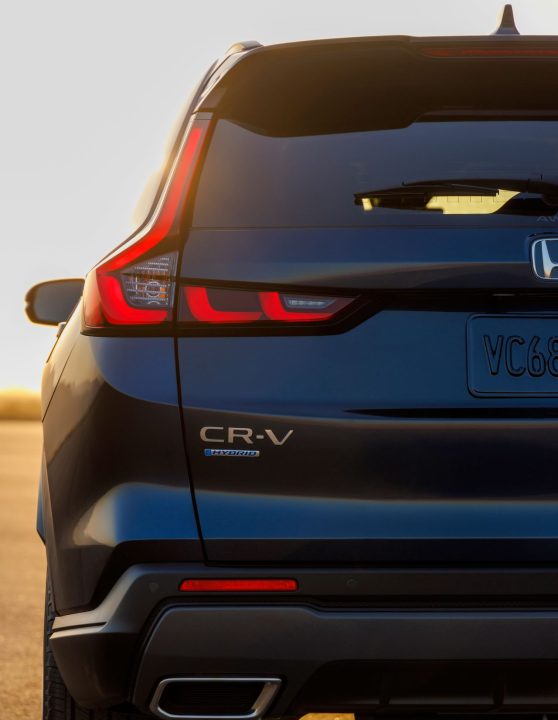 The rear of the 2023 Honda CR-V has likewise gotten an update. The most recognizable feature at the back – the taillights – retain the same but now thinner L-shape, but it’s in the trunk garnish that we see a difference. Instead of a plain strip running the width of the tailgate, the units are segmented by L-shaped reflector/light accents. Again, sporty with a touch of elegance. The horizontal reflector piece remains on the bumper, as well as the sharkfin antenna on the roof. The wing might have had an update, too, but we can’t get a really good look based on the photo. Perhaps the biggest curiosity for the 2023 Honda CR-V is the engine that it will come with. Now, these photos are from the USA market, and we can clearly see the Hybrid badge. As of this writing, this option is the only one that’s been confirmed for the North American market. Unfortunately, no engine bay photos were included, but we can probably hope that Honda Cars Philippines, Inc. will continue with what we get in Southeast Asia: the 1.6-Liter iDTEC turbodiesel engine.

See also  Aston Martin DBX to launch in the Philippines

It’s either that or the 2023 Honda CR-V will also get a gas-fed 1.5-Liter iVTEC turbo mill the same as what North America also has.

There was likewise no relevant date for the Southeast Asian region as to when it will be released. If we were to make a guess – and hope – it could be launched in the USA in a few months. That could mean a SEA release by year’s end, and a Philippine debut already in 2023, probably in Q1 of Q2. Yes, we’re all going to have to wait just a little bit more before we get our eager hands on the new CR-V.

This model is definitely due for an update, and the 2023 Honda CR-V may just be everything we could need in a crossover and more. In the looks, safety, features, and engine department, the current lineup of Honda vehicles has already set what the CR-V could (and should) get. Exciting times ahead, definitely.

30th Trans Sport Show opens at SMX tomorrow, and it's going to be awesome