Ever since the advent of the Covid-19 pandemic, the use of bicycles has gone up as a means to address the need for a safe alternative mode of transportation.

In the past 2 years alone people using bicycles have gone up, and this has also caused local government units to create infrastructure programs such as bike lanes in certain areas. While these efforts to give cyclists their own safe space on the road have somewhat been a good thing.

The inconsistent rules and unclear guidelines have been the subject of debate among all motorists. Not to mention the fact that some of the guidelines are vague or non-existent.

In essence, the Philippine Bicycle Act is a policy that seeks to define and implement the needs and rights of cyclists. Instead of having different rules and regulations per local government unit, this bill wants to formalize an overall set of rules for the country. Apart from the rules, the bill also wants to be able to create infrastructure. Let’s go through the salient points of the act. 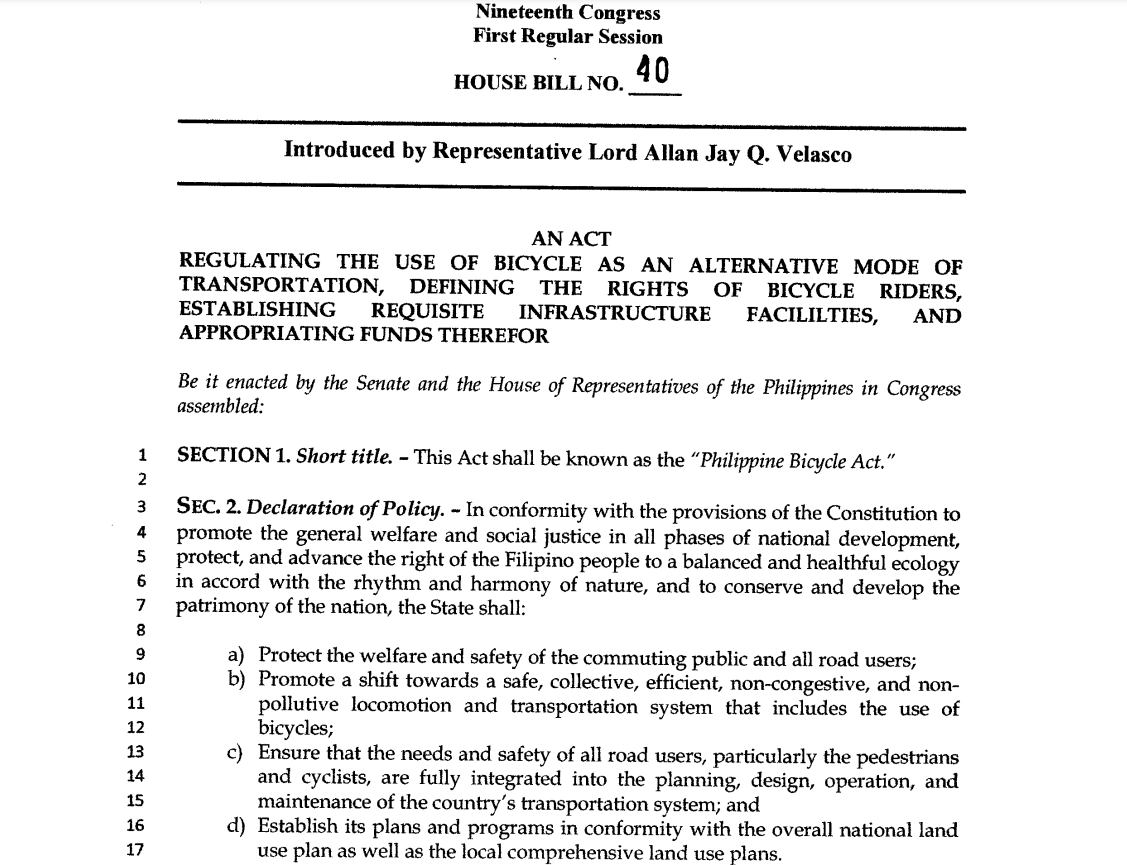 It is then explained that within 6 months from the issuance of rules and regulations implementing the provisions of this Act, the Department of Transportation (DOTr), in coordination with the DPWH and NEDA, shall come up with a National Bike Program. This program is supposed to include the plans and strategies for the construction, provision, and maintenance of bicycle lanes, parking areas, and other facilities. It shall also provide the standards for bicycles and regulations for the exercise and protection of the rights of the cyclists.

In order to properly implement the program set within the Philippine Bicycle Act, a Local Bicycle Office (LBO) will be established in every city and municipality.

Here is the LBO’s role as defined by the document: 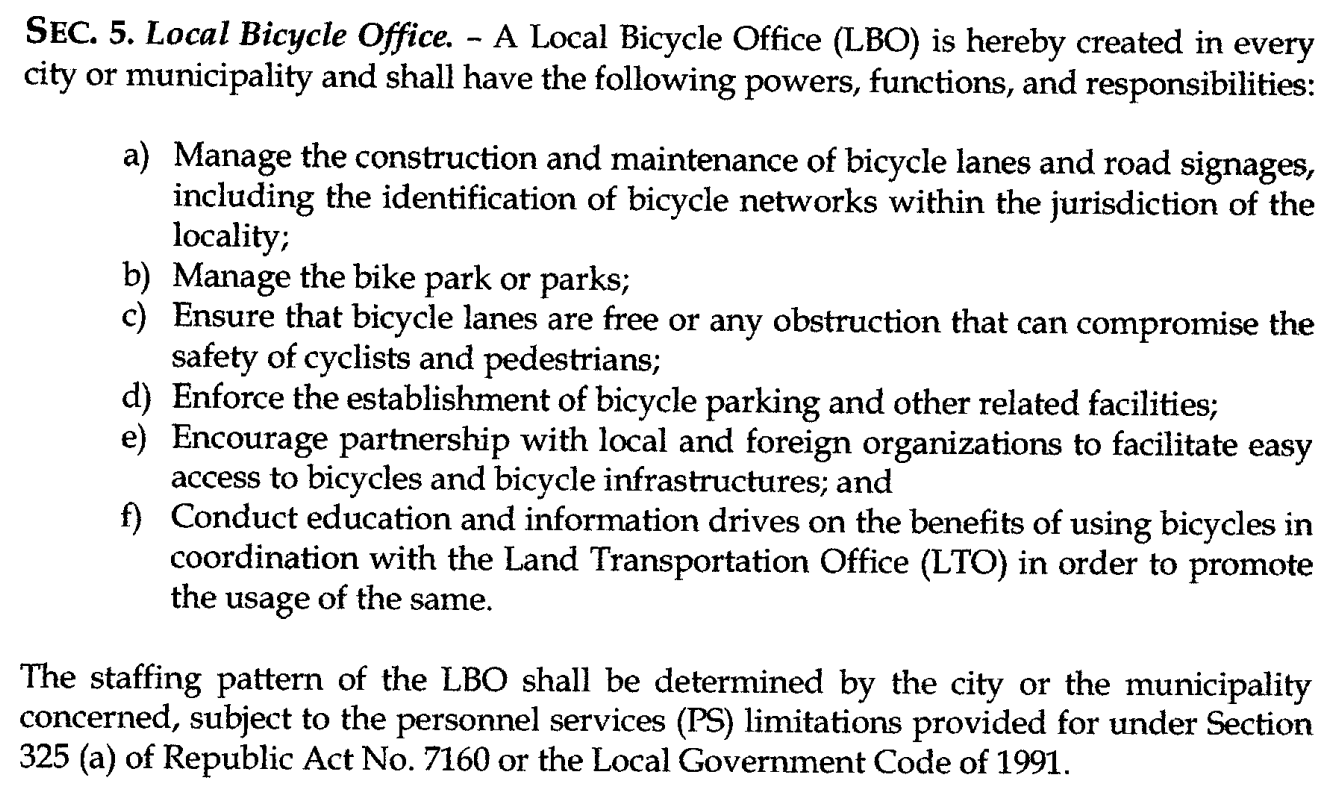 Section 6 of the Philippine Bicycle Act tackles one of the most important (and debated) parts of cycling; the Bicycle Lane. The act proposes that a designated bicycle lane will be put on all primary and secondary roads for the exclusive use of cyclists.

It is also mentioned that the bike lanes will be separated by a physical barrier and accompanied by clearly identified signs or pavement markings. However, in cases where the installation of a physical barrier is not feasible, the lane shall be identified through reflectorized yellow painted lines.

The specifications and designs of the bicycle lanes will conform to the standards adopted by the DOTr and DPWH. What the bill does not mention though is how they will address the apprehension of those who violate the use of the lane, or how they plan to address the issue of lanes being too small or intrusive on main roads.

Sections 7-9 are all about bicycle-related facilities that are tailor-made for the cycling community. Moreover, these facilities are there to give cyclists more safe spaces such as parking in all establishments, sidewalk improvements, and pedestrian and bicycle crossing improvements. 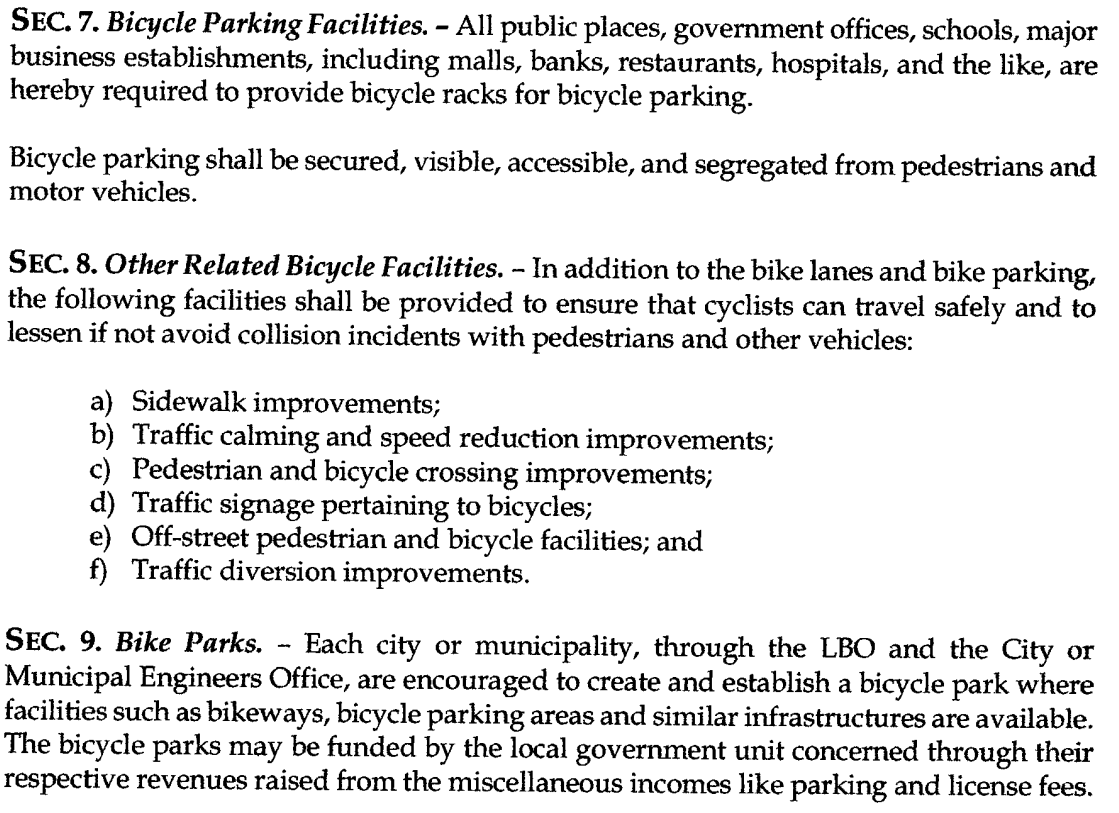 Rights, Obligations, and Responsibilities of Cyclists

Here’s where it gets more interesting, the Philippine Bicycle Act also states what rights cyclists have, but also what obligations and responsibilities they’ll have to deal with as well. 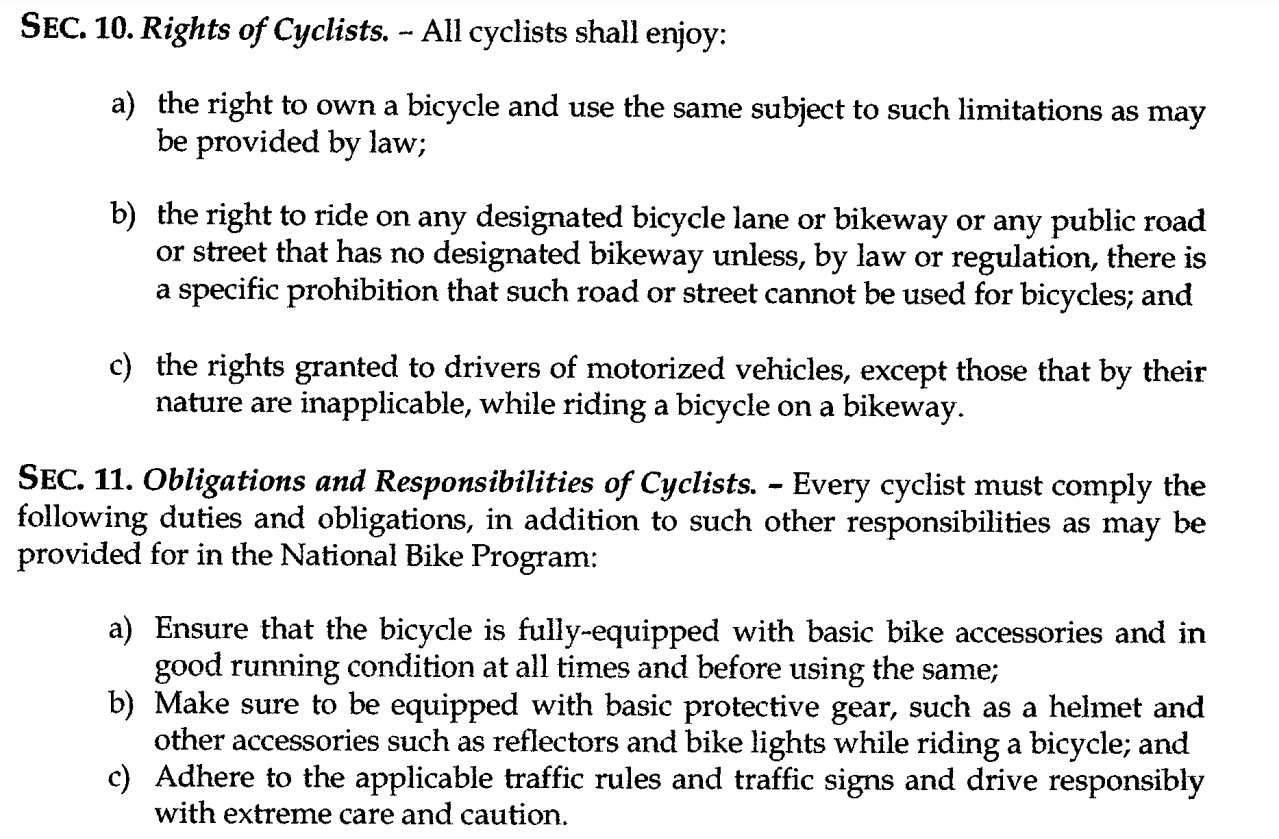 Limitations, and exceptions to remain on the bicycle lane

Section 12 of the act mentions the limitations on the use of bicycles such as specific and safe uses, while section 13 talks about the exceptions on when cyclists are allowed to deviate from the designated bike lane. 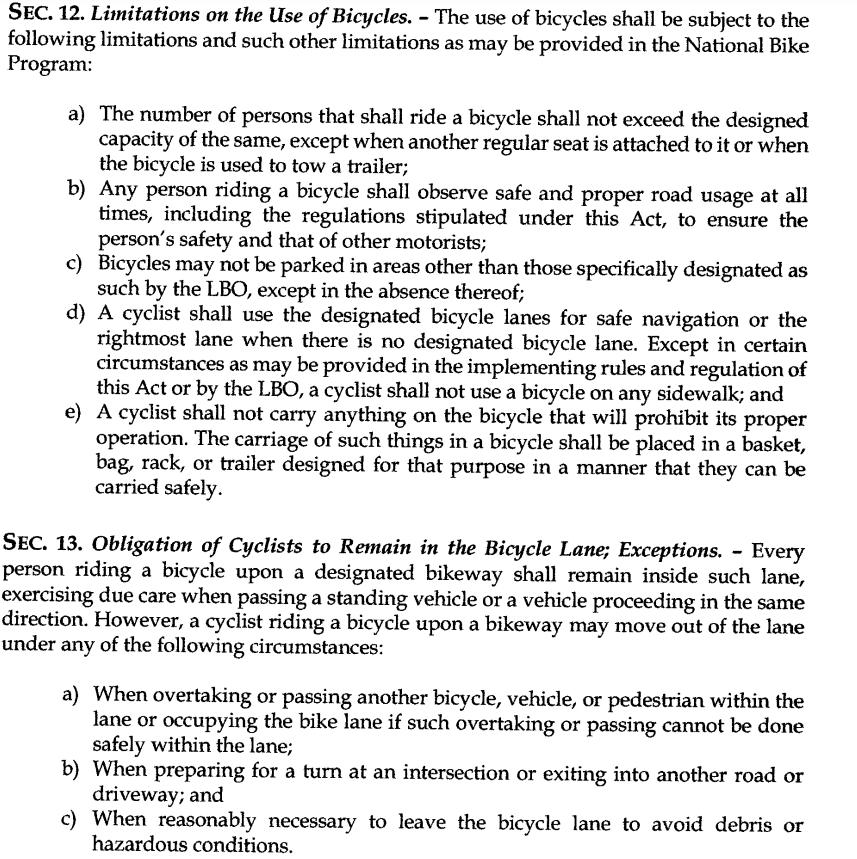 The titles of Sections 14 and 15 are pretty self-explanatory. What did catch our attention though was the mention that police officers are allowed to test drive bicycles to see if they’re road worthy, I’m not sure if most people will be comfortable with that. 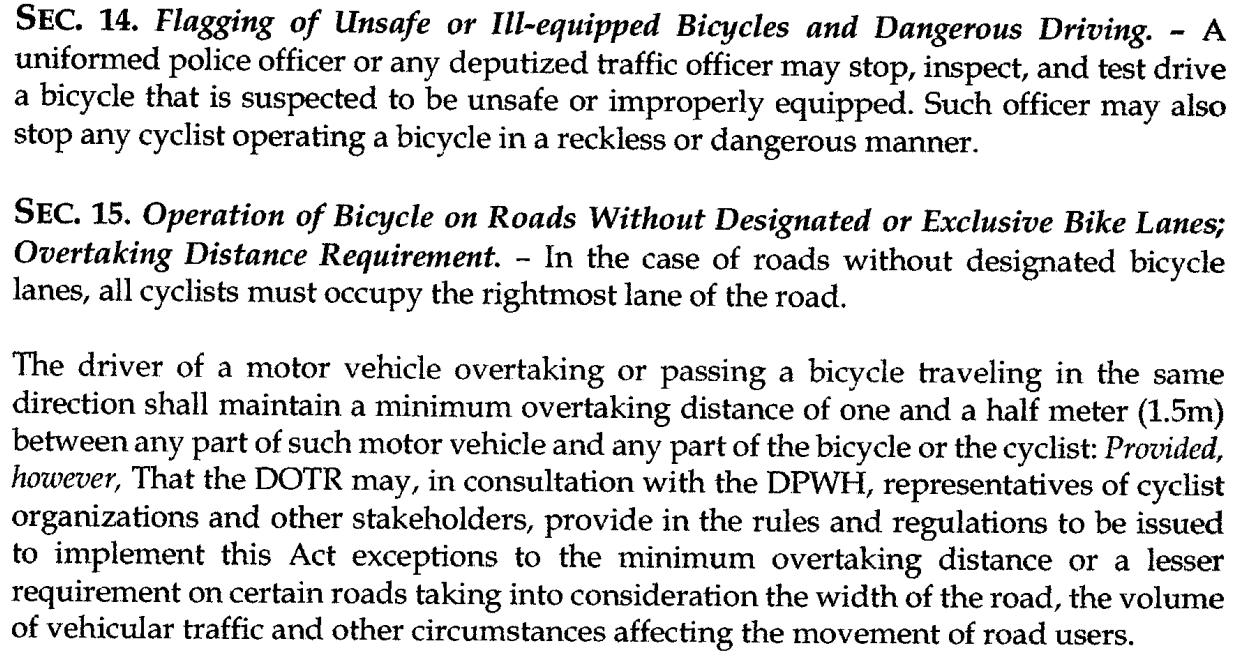 Of course, our Government needs to “hook” more people to use bicycles and as such, they have put in a few incentives in the act. 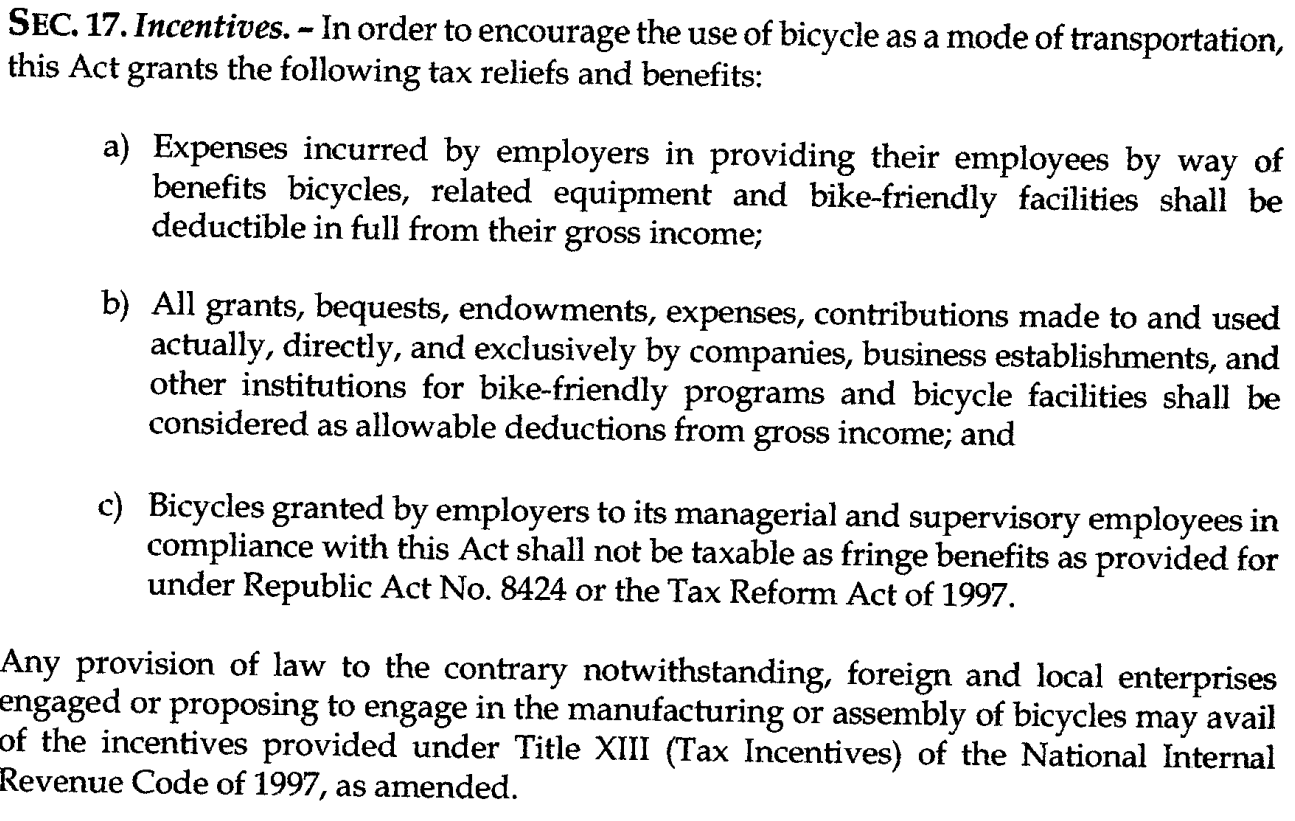 The most important section of the act is the penalties and their corresponding fines. 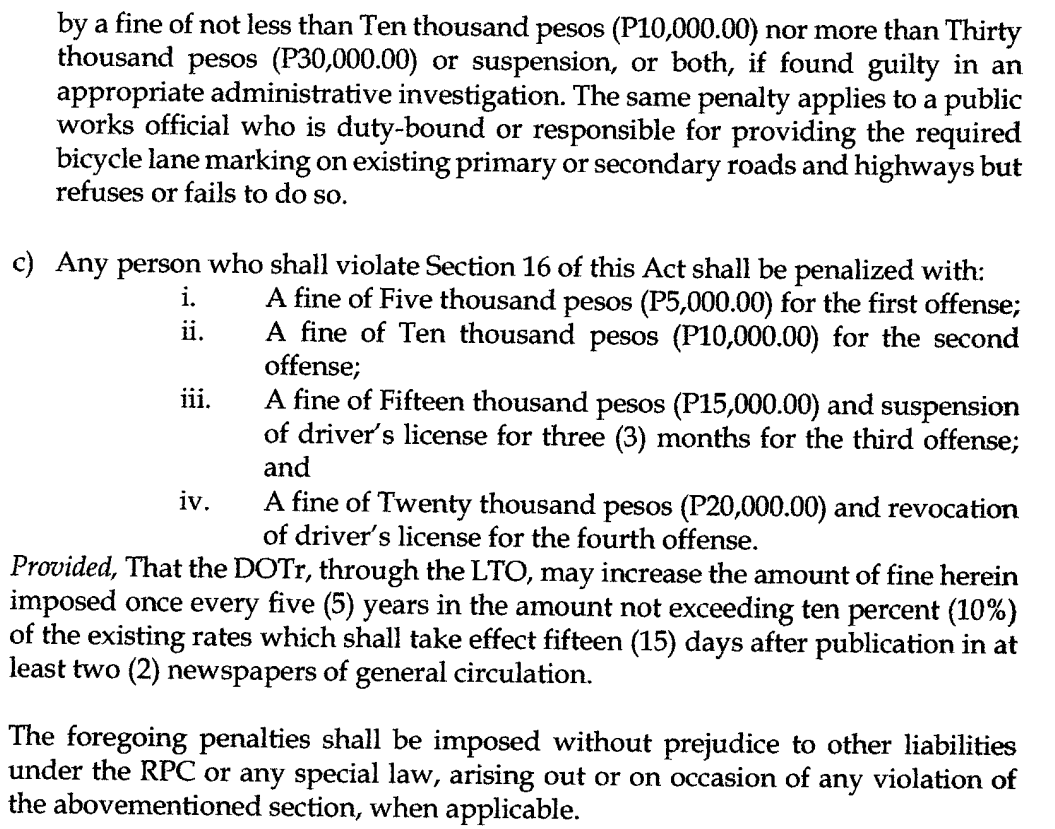 It seems the government is taking it very seriously, these fines are pretty hefty and are almost identical in terms of cost to other driving penalties fees. What is appreciated is the penalty for officials who fail to establish a bike lane while constructing a new road. 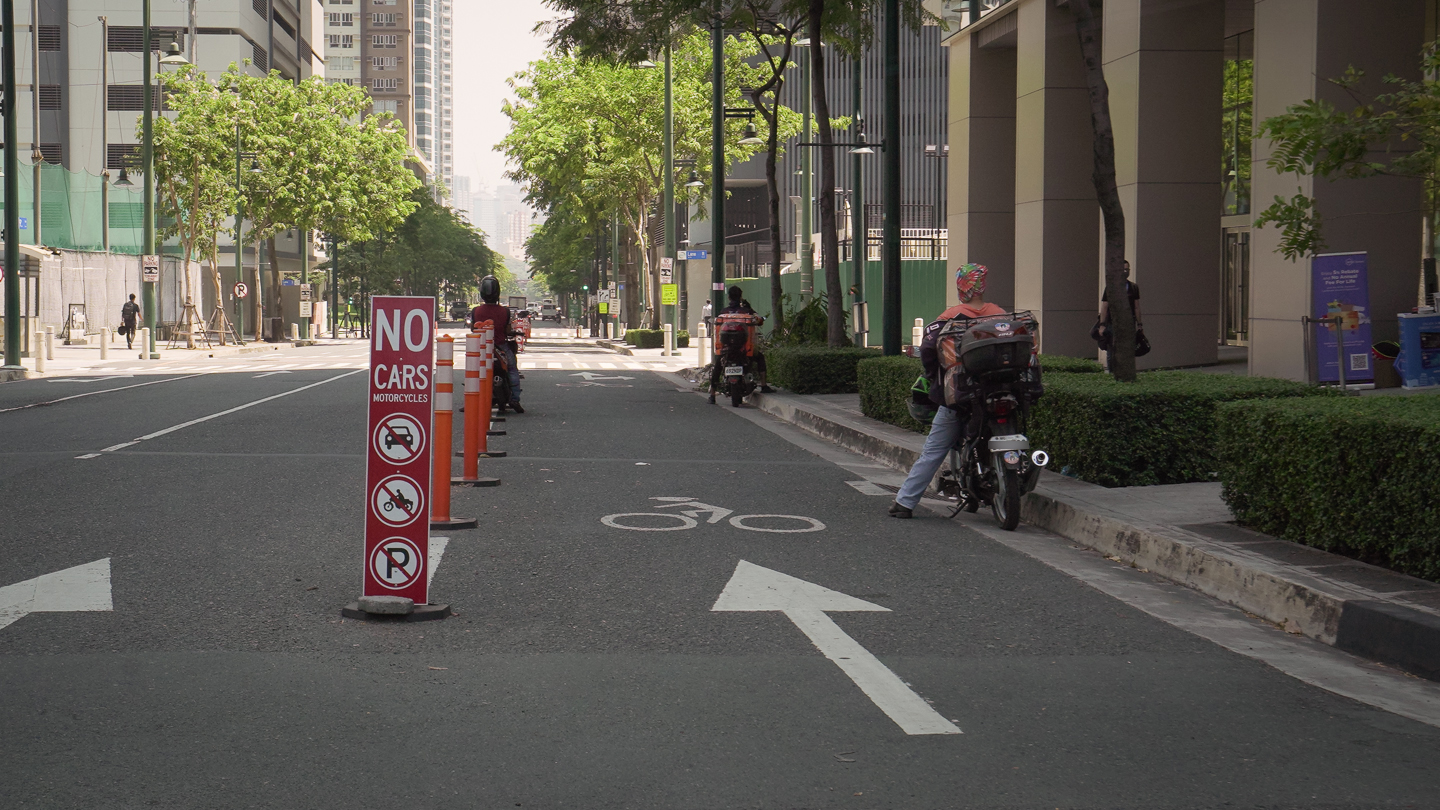 While the Philippine Bicycle Act (house bill 40) seems comprehensive, most of the sections and language used give the impression that the rules are still subject to debate and deliberation. It’s evident though how the Government wants to truly give cyclists more rights, and infrastructure on our roads.

Lastly, what remains to be seen is how the Philippine Bicycle Act will fit cohesively into our transportation system, and how existing infrastructures like roads will adapt. With a more defined rule for bicycle lanes on primary and secondary roads, won’t it lead to more traffic? considering most inner city roads have already been reduced to 1 lane for vehicles.

The apprehension must also be consistent for violators, the recent implementation of the NCAP program in Quezon City has been “spotty” at best.  In other words, for this act to truly work, it must take into consideration every facet of the bicycle transportation system, not to mention the other aspects that affect it as well.