Yesterday’s news on the return of the MMDA Coding caused quite a stir. With only 4 days before vehicles will again be prohibited twice a day at separate times, and there’s barely any time for motorists to adjust the travel hours and arrangements that they’ve already gotten used to. But in a bit of good news, August 15-17 will only be for the Coding dry run.

What does that mean for us, then?

MMDA Coding violators will only be apprehended starting August 18, 2022

The “original” Coding scheme will resume implementation on Monday, August 17. From 7:00 AM – 10:00 AM and 5:00 PM – 8:00 PM, vehicles will be prohibited from being used on days corresponding to their plates’ last digit. The decision to (abruptly?) start the implementation of the pre-pandemic scheme was brought about by the traffic jams that the Department of Transportation and Land Transportation Office are anticipating because of the resumption of face-to-face classes. Yesterday’s announcement was surprising, to say the least, leaving motorists much less than a week to adjust their usual travel arrangements.

The MMDA seems to have heard this and announced last night that from August 15-17, those who might (or should) be caught for violating the MMDA Coding scheme will only be given a reminder that it will be in full effect starting on the 18th, and will not be issued a ticket. This was announced and confirmed by no other than MMDA Acting Chairman Engr. Carlo Dimayuga III. 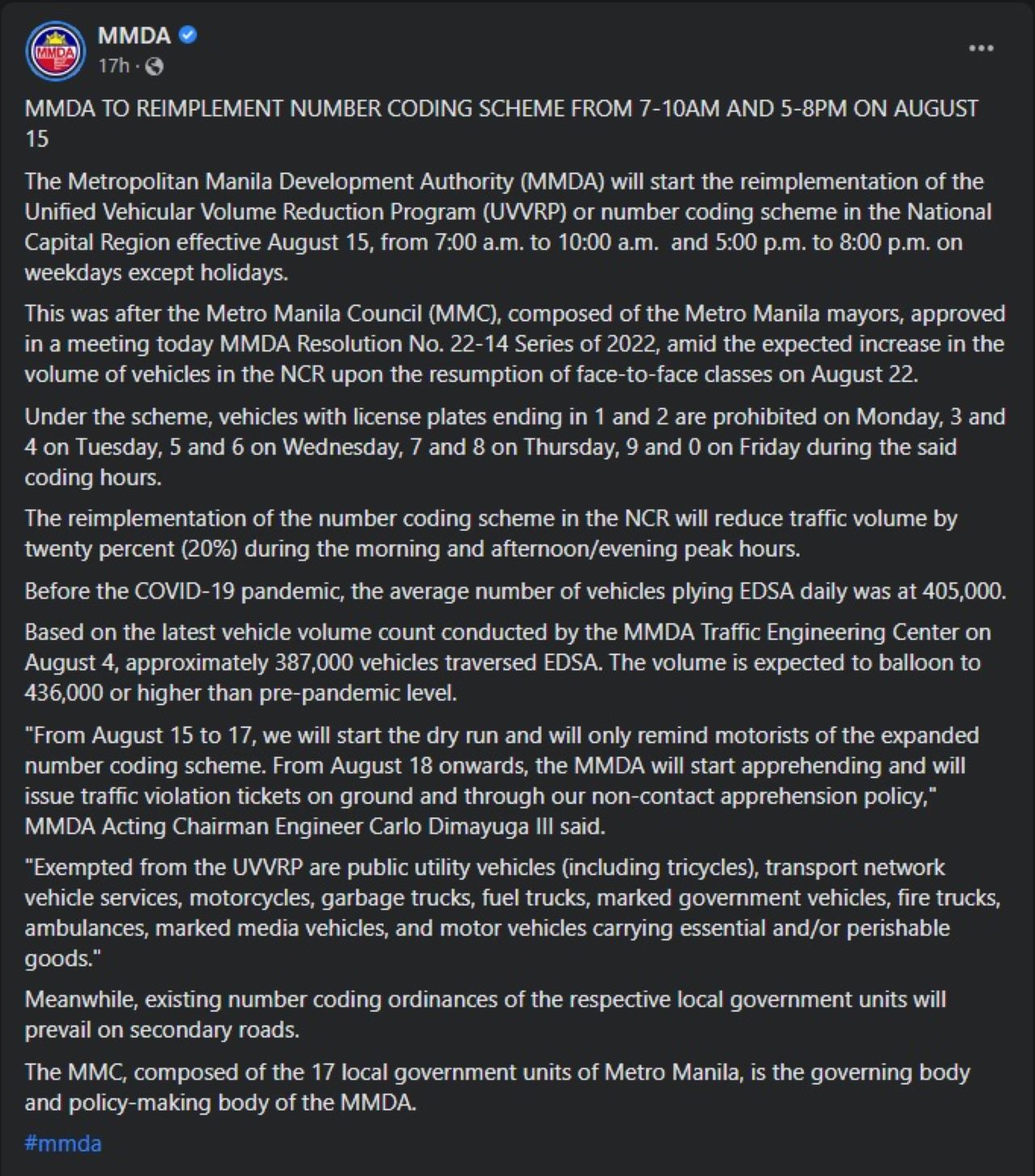 The MMDA Coding scheme’s re-implementation hopes to reduce traffic in and around NCR by 20% during coding hours. Based on the MMDA’s vehicle volume count just last August 4, there were approximately 387,000 vehicles that traversed EDSA. Come face-to-face classes, they expect this to rise to 436,000; close to if not more than pre-pandemic numbers.

The Metro Manila Council (MMC) which is composed of the Metro Manila mayors approved MMDA Resolution No. 22-14 Series of 2022 in their meeting yesterday, given the expected increase in the volume of vehicles in the NCR upon the resumption of face-to-face classes on August 22.

Best that you all start finding alternate routes or adjusting your travel times and arrangements altogether, ladies and gentlemen. Traffic will only get worse before it gets better, and the return of MMDA Coding hours can either work or not. But hey, we’ve already lived through a lot of years with it, right? As the saying goes, “Ako na lang ang mag-a-adjust”. Yes, here we go again.

Cebu Pacific to cancel flights to South Korea from March 3 to April 30, 2020