I’ll be honest right now and say that I wasn’t really a fan of the MG ZS, It had all the ingredients to make it a good crossover, sleek, feature-packed, and most importantly affordable. The one thing it lacked? Power, I just felt that the ZS could’ve benefited from a more powerful and smoother engine.

Thankfully MG addressed that issue, by releasing a “spin-off” variant of the popular ZS, the ZST; and yes “T” stands for TURBO! 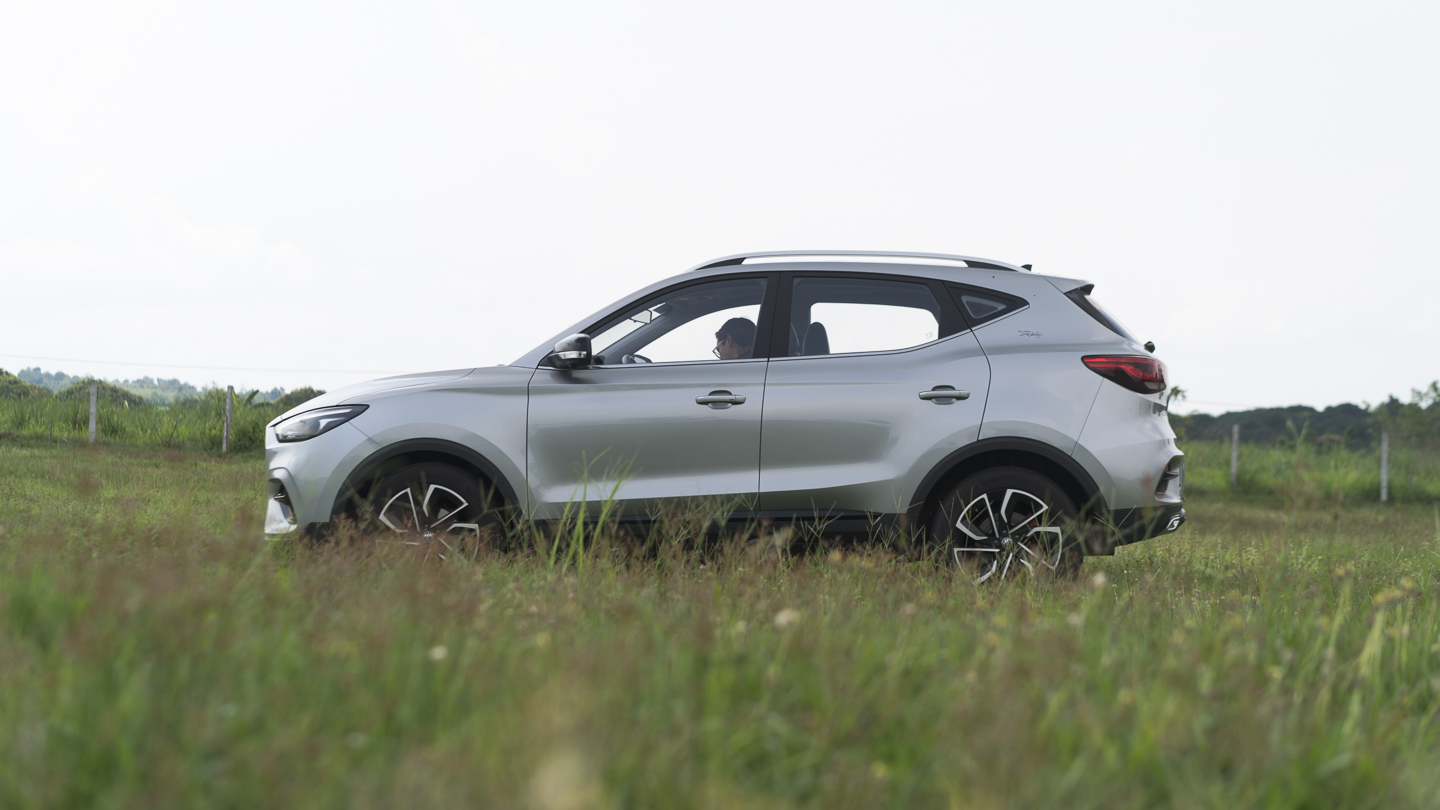 If there’s one thing the MG ZST has going for it right off the bat is its looks. MG struck gold with the ZS design, and with the ZST they’ve made it even better. 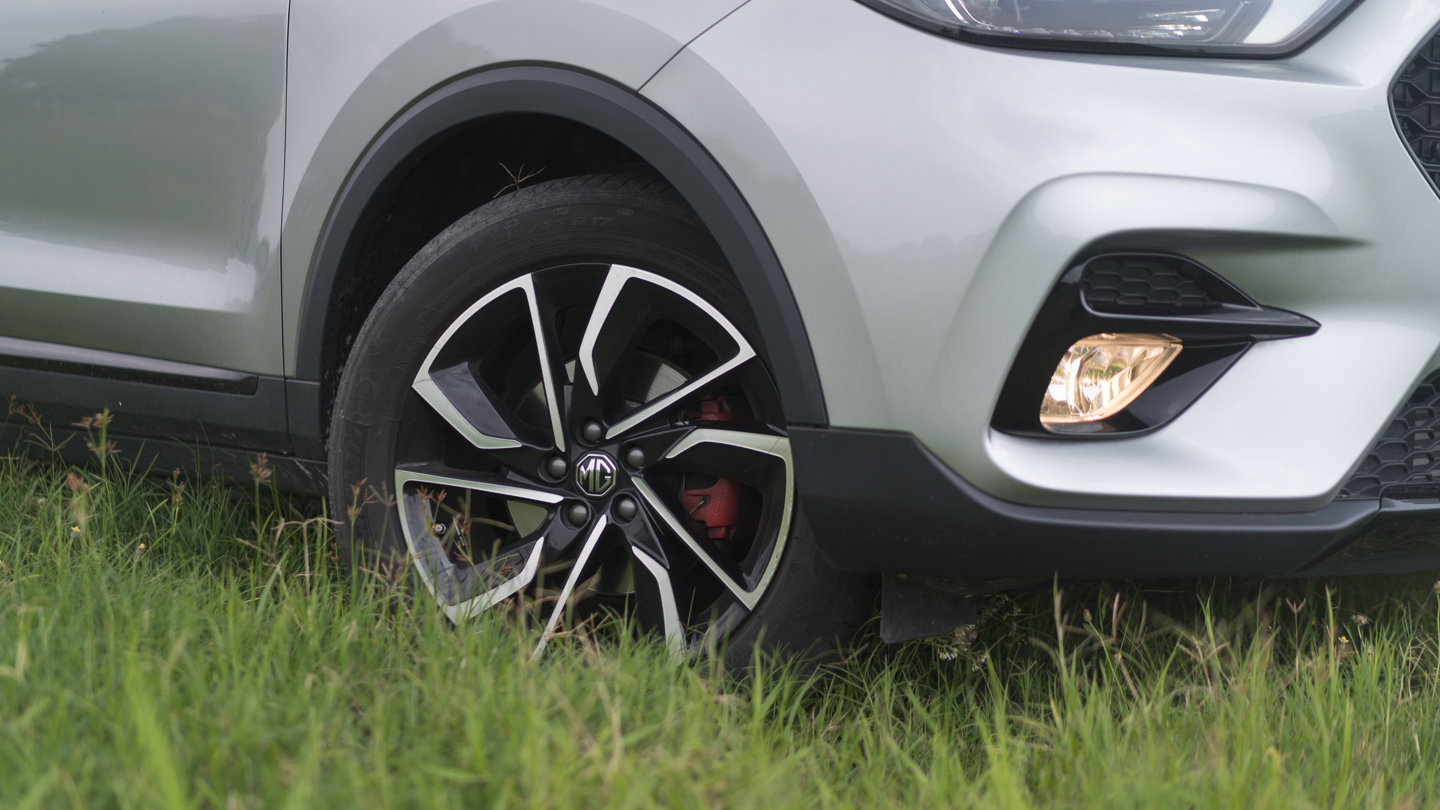 The ZST has a new face, that features a more striking appearance highlighted by the Obsidian Matrix Grille. The grille is flanked by the LED headlights and DRLs. Over at the side, it has the two-tone Tomahawk design-inspired 17-inch alloy wheels, and at the back new LED taillights.

I honestly really like the way the MG ZST looks, it’s not trying too hard to look modern or sporty, it blends both design ideas well. If there’s one thing about the design I don’t like though, it’s the faux chrome exhaust tips. I know they’re common nowadays (for some absurd reason), but please stop using them, especially if they’re obviously not being used. 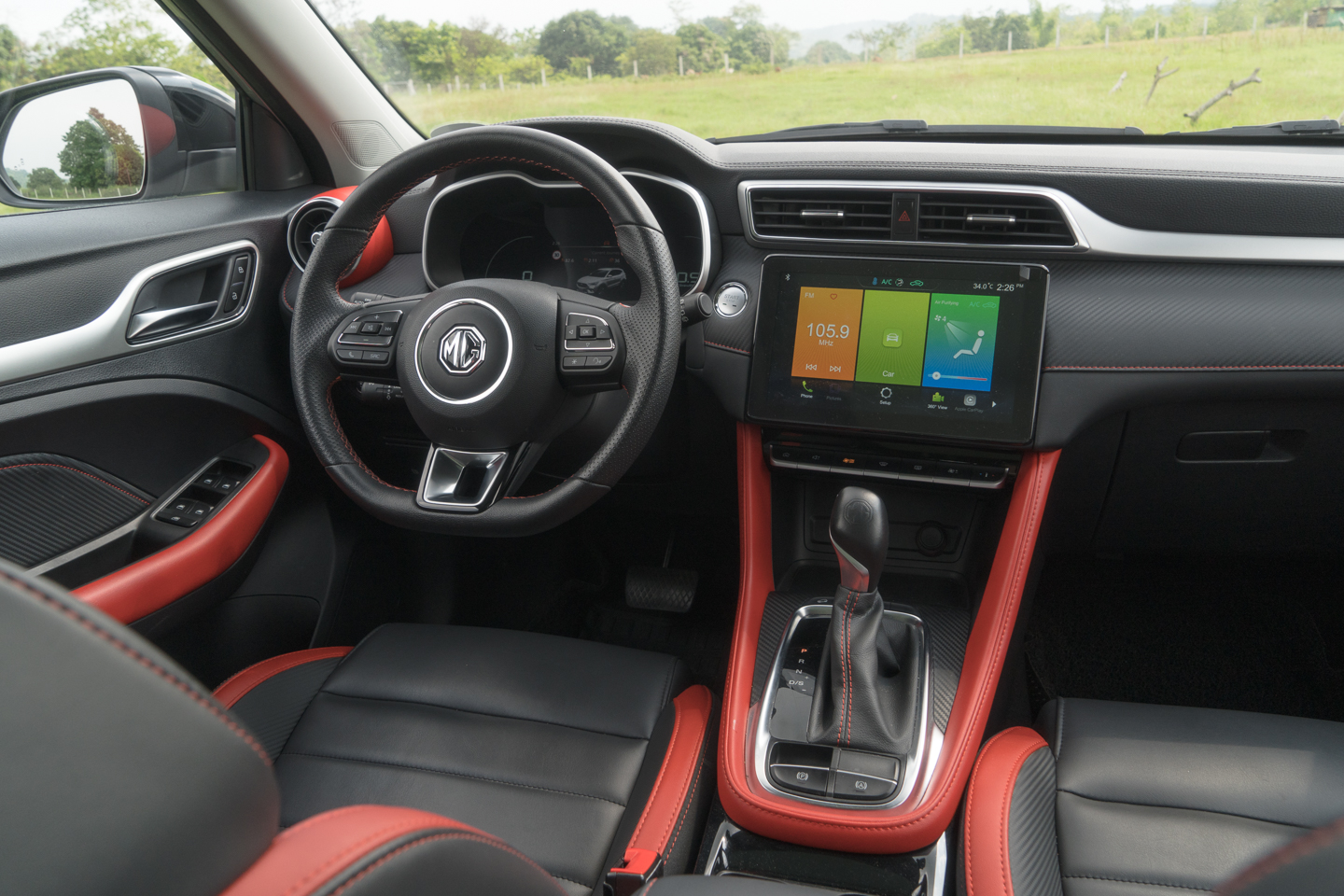 The interior is where a lot of the aesthetic upgrades take place, the most noticeable is the black and red color motif that’s splattered across the interior. Accompanying the contrasting colorway is the smattering of MG logos on the driver and front passenger headrest as well as an embossed MG logo on the gear lever. 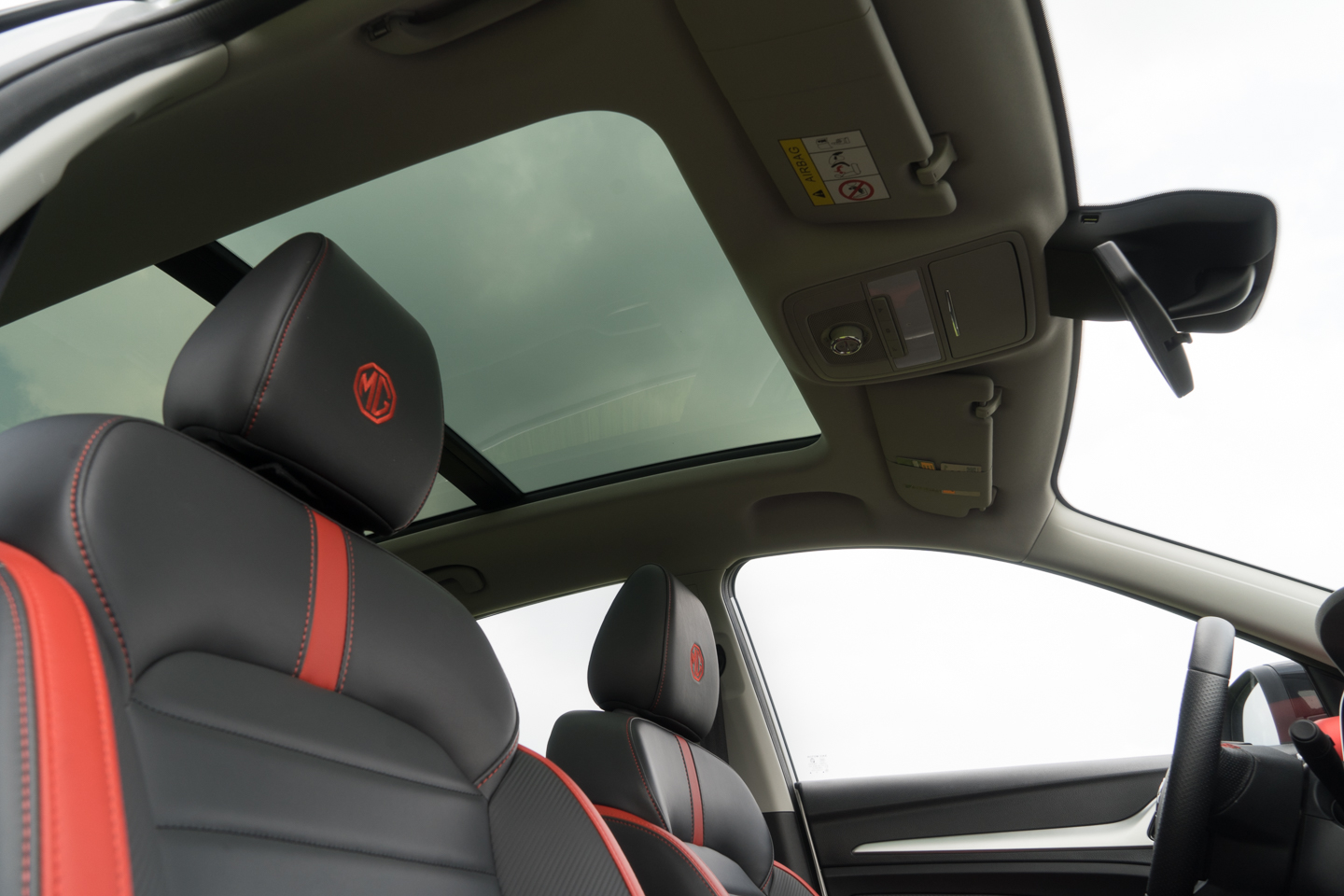 Its multi-informational display is a huge digital panel that MG calls the “Goggles Virtual Instrument Cluster”, which houses your digital speedometer, trip meter, and other relevant information. I found the instrument cluster to be a visual overload at first, really having to thoroughly check what information was being displayed, but after a while, I got used to it. 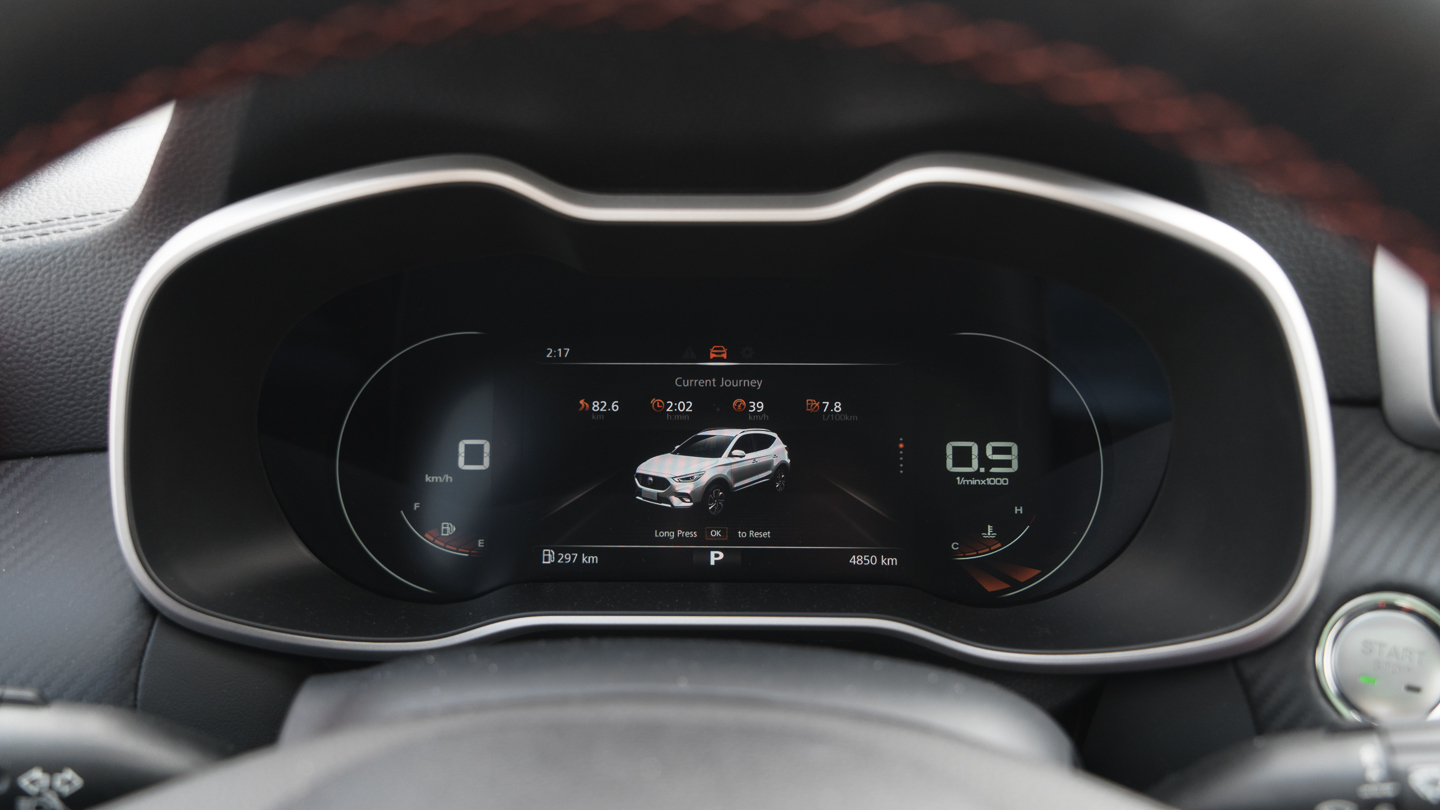 Next up is the 10-inch touchscreen HD infotainment screen that has Apple CarPlay and Android Auto. The screen is huge and legible making its operation easy and not distracting, however, I do wish MG updates the software because there were times when the screen would lag and not respond as fast as it should. 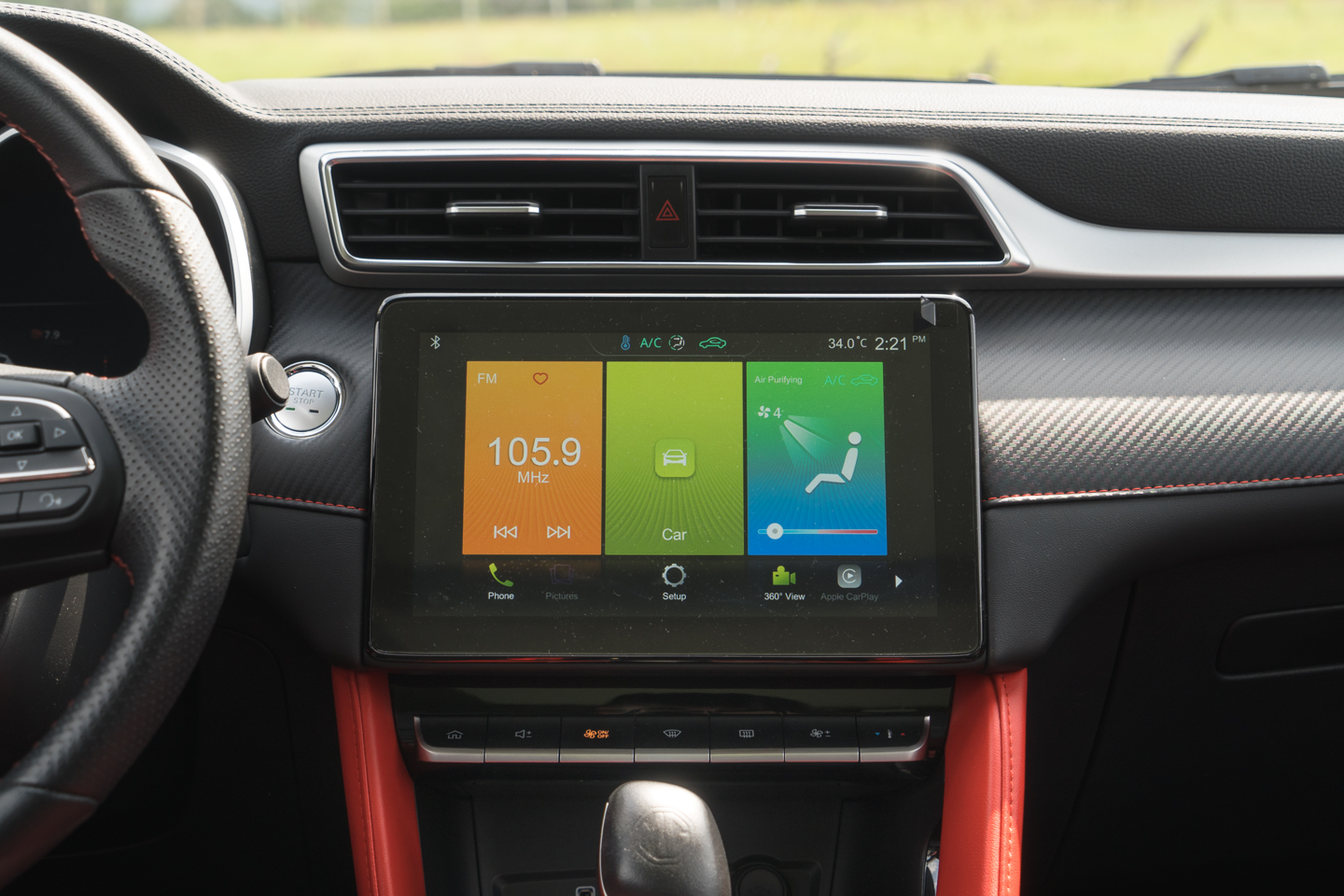 Last but not least is the extended panoramic sunroof that in the ZST makes it seem like the whole roof is a glass panel; it’s that big.

Overall it’s a huge step up in terms of quality and materials, the MG ZST’s interior makes you feel like you bought a special edition car. Testing the “T” in ZST

The MG ZST is powered by a 1.3-liter turbocharged dual-port injector gasoline engine. Before you scoff, it makes a healthy 163 Ps and 230Nm of torque, the engine is mated to a 6-speed automatic transmission.

As mentioned earlier, the engine itself is the biggest and best update. Immediately the ZST proved to be much more powerful than the standard ZS. Apart from the power, the engine is much more refined presenting itself as a quiet “law-abiding” citizen in the city. 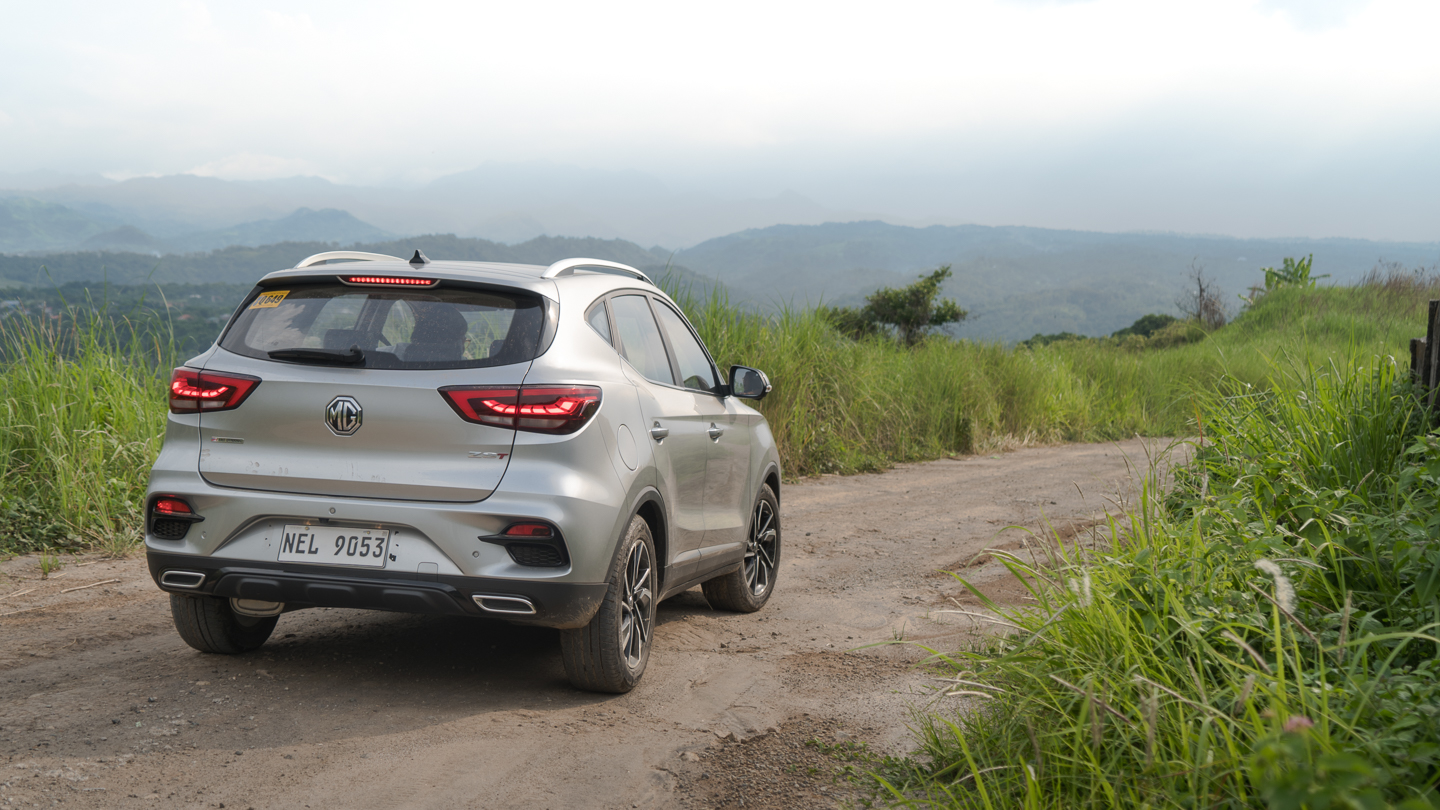 Out on the highway and twisty provincial roads though the engine can and will come alive. I was surprised (and happy) at how responsive it was, even at full load (5 adult passengers) it registered not a single hint of “stress” or lag. Steep inclines were “easy-peasy” for the new 1.3-liter turbo.

My favorite bit though is the engine note, I was shocked when I first floored the MG ZST and it made a very sporty and “throaty” snarl. It has an engine note reminiscent of the old err… MG sports cars of the late ’60s and ’70s, that makes you want to keep pushing the car to the red line.

Another neat feature though is the speed limiter, on the Skyway I set it at the 60 kph limit and no matter how hard or deep I pressed on the gas pedal it maintained the speed and revs. It was actually easier to use than the cruise control because we all know how tight and busy the Skyway gets, so instead of canceling and redoing the cruise control every time someone cuts you off, the limiter works just fine.

As for fuel economy, the ZST was decent at sipping the fuel, In the city, I averaged at best 8.5Km/L and at the highway around 13Km/L. 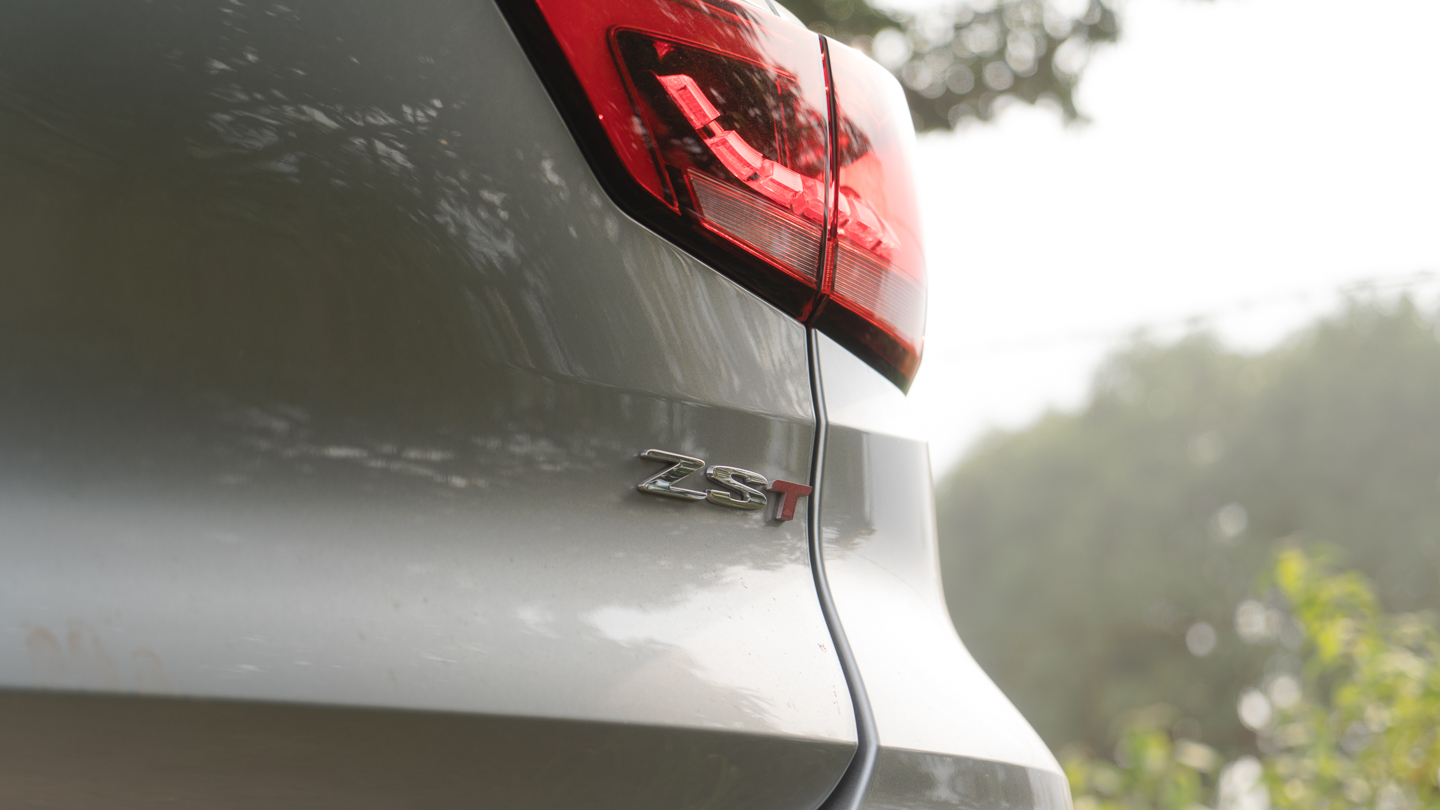 While I’m all praise for the engine, I do have some comments on the other driving dynamics. My main point is that the handling doesn’t match the new engine, don’t get me wrong it’s not like the ZST handles like a grocery cart, it just isn’t as sporty or engaging as it should be.

The steering is perfect for city driving, it’s light which makes the car a breeze to maneuver around the metro, but I wish it had more “feel” and responsiveness during spirited driving conditions.

Again these are just my opinions, and my critiques sound like “first-world problems” because at the heart of it, as an everyday car the MG ZST is good and engaging enough for most people. 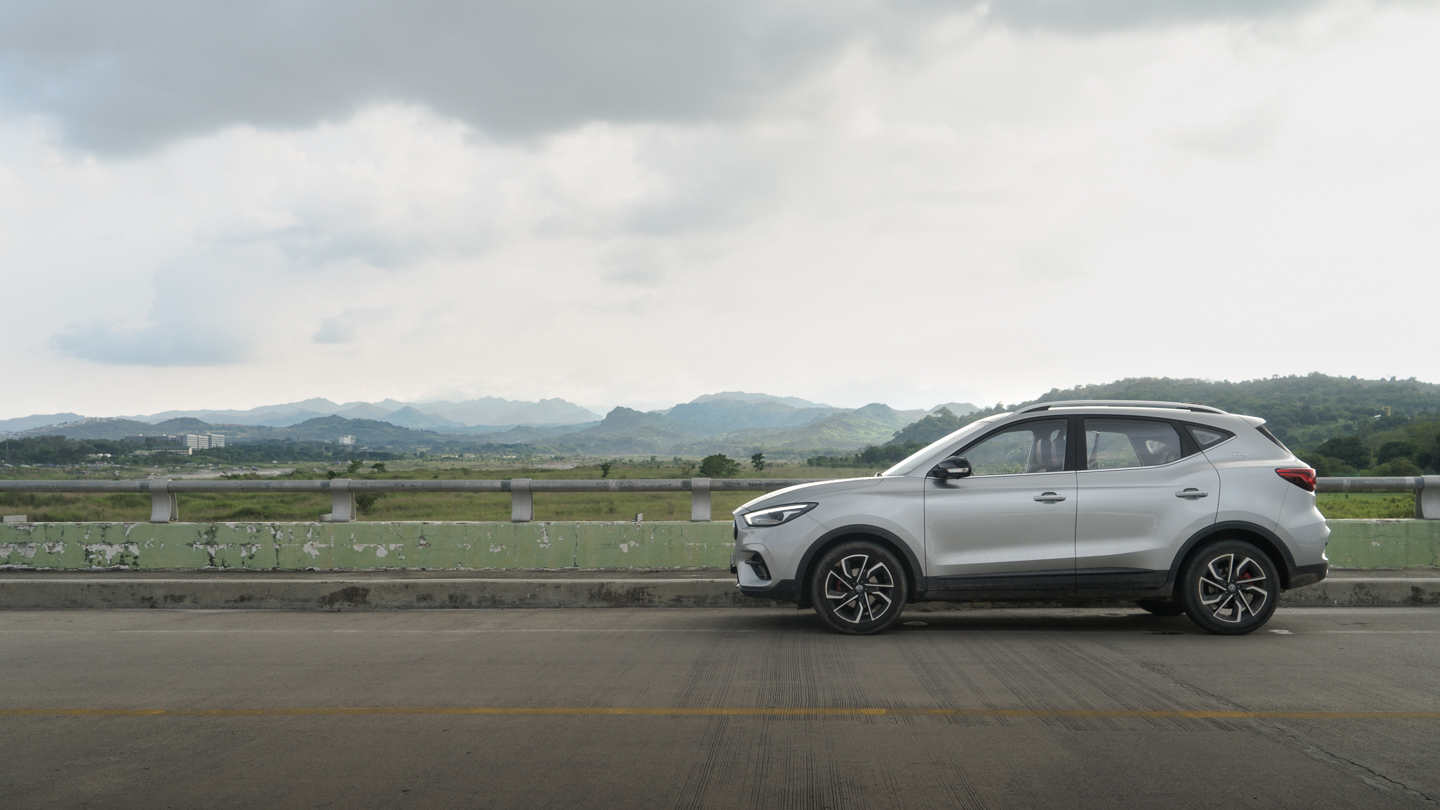 I was tough on the MG ZST not because of prejudice but because of the competition. The affordable crossover segment is as competitive as ever, with its rivals setting the bar higher each time. In all honesty, the MG ZS was the first “King” of that segment, when it was first released droves of people lined up at the dealership to get their hands on it. I understand why, it offered a ton of features and practicality at a very affordable price.

How does the MG ZST stack up as a stand-alone model though?

I think the engine alone is worth the jump in price compared to the standard ZS, the ZST’s powertrain package is leaps and bounds better in my book. Also, as I said earlier, it really does feel like a “special edition” model, setting itself apart the right way.

The MG ZST justifies its price tag of PHP 1,158,888, by offering a refined, engaging, and bang-for-buck experience. If I were you, I’d spend a little extra for the ZST.

Davao Metro Shuttle first PUB to get you from PITX all the way to... Davao!